Chemical Engineering at Loughborough is well known for its expertise in Particle Technology and in recent years this has evolved into nano- and micro- engineering of particles and materials, with regard to their manufacture, formulation and dispersion.

Across all our nano- and microscale engineering activities we have around 20 people including academic staff, PhD students and post-doctoral researchers. Below you can see staff involved in the generation and characterisation of nano and micro-scale particles for a range of end uses including the pharmaceutical, energy and food sectors. Some of these are highlighted in our case studies

Activities we address include but are not limited to:

Catalysts play an extremely important role in enhancing the quality of our modern life. As much as 90% of chemicals and materials manufactured throughout the world depends on catalysis.

In order to rationally design high-performance catalysts, we need to understand the catalysis processes at atomic and molecular level, in other words, we need to probe the secrets of reactions occurring on metal catalysts, which is not straightforward. The real catalysts are far too complicated for fundamental studies. How to effectively study the catalysis processes at the most fundamental level is extremely challenging if not impossible.

This grand challenge motivated us to develop an effective model catalyst through the nano-engineering of the well-defined facets of nanocrystals with continuously tunable surface structure. This strategy is in significant contrast to the conventional wisdom of using well-defined bulk single-crystal planes as model catalysts, as our studies on ethanol oxidation exemplified the effectiveness of the nanocrystals but not the bulk single-crystals.

Only the nanocrystals can reveal the key roles conferred by the edge sites of real/practical catalysts, enabling us to study the structure-reactivity effectively at atomic level. This study has a far-reaching impact on both catalysis and surface sciences communities.

Low intensity ultrasound is being developed as a tool for characterisation of nano- and micro-particle materials, especially suspended in liquids. We are working on mathematical and computational models for ultrasound propagation, particularly focussing on thermal and viscous interactions between particles in an ultrasonic field. Systems studied include emulsions, concentrated slurries, environmentally responsive polymer-coated particles and crystals.

Finite element models are being used to investigate the fluid flow and temperature patterns around particles in an acoustic field. The thermal and shear disturbances occur within a few micrometres of the particle surface. The image shows a finite element simulation of the vorticity around a 500nm diameter spherical particle in an acoustic field. Further simulations demonstrate how these thermal and shear disturbances affect nearby particles.

Carefully chosen surfactants under well-defined thermodynamic conditions can reduce the interfacial tension of oil/water interfaces by several orders of magnitudes. Such systems have been adopted in a wide range of applications, including enhanced oil recovery, bio-encapsulation and self-emulsification. In this research, droplet microfluidics and optical methods (including digital video microscopy and optical trapping) are adopted for the generation, characterisation and manipulation of ultralow interfacial tension droplets and the creation of all-liquid droplet-nanothread networks (DNNs). Novel optofluidic approaches are also developed for investigating the nanofluidics of DNNs, which is of great biological importance. 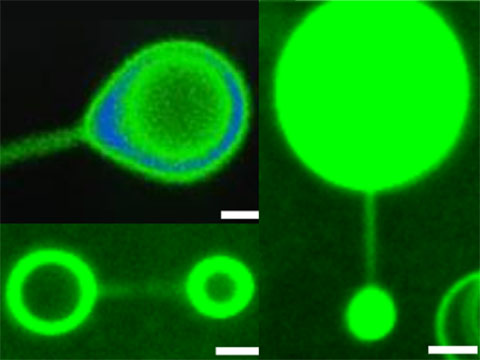 Academics involved with this research area: