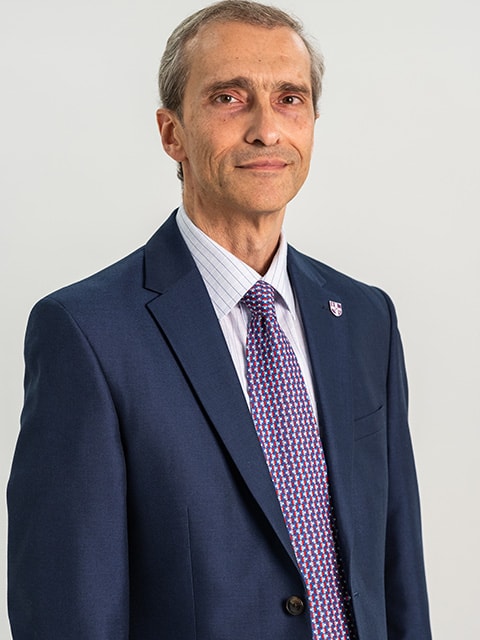 I am a Civil Engineer with 10 years of industry experience working with international construction organisations, complemented by over 25 years of academic experience since I joined Loughborough University as a Research Associate until my current position as a Professor of Construction Informatics and Associate Dean for Enterprise.

My research expertise and interests are in advanced information and communication technologies (ICT) in construction across the whole life cycle, application of advanced ICT to improve energy efficiency in buildings and neighbourhoods for new built and retrofitting, smart buildings technologies, BIM and digital twin and their integration with buildings energy performance, Artificial Intelligence applications in construction and infrastructure, industrialised construction and information modelling. I have participated in over 18 projects funded by the European Commission in the above-mentioned areas as Coordinator or partner, and have been leading the School participation in various EU initiatives. This is in addition to EPSRC funded projects within the BUILDTEDDI programme (Transforming Energy Demand through Digital Innovation). I have raised research funding of over £7M directly to the School, with total research projects of value of over £50M.  I have authored / co-authored over 200 peer-reviewed publications and successfully supervised over 25 Doctorate students / RAs. I have been serving as an evaluator of proposals and reviewer of projects for the European Commission and for other research councils across the world, as an external examiner for construction management programmes nationally and internationally and invited keynote speaker and guest lecturer in prestigious conferences and universities across the world.

Since my appointment as Associate Dean for Enterprise, I have been leading the School enterprise activities including consultancy, strategic partnerships with industry, Knowledge Transfer partnerships in addition to nurturing the research impact culture within the School

I contribute to learning and teaching activities across the Schools programmes including:

I look after the School’s enterprise portfolio including consultancy activities, Knowledge Transfer Partnerships (KTPs), EPG projects (Enterprise Projects Group), partnerships with industry including contract research and funded PhDs, IP protection, commercialisation, in addition to nurturing the research impact culture within the School. I lead the development of the Impact Case Studies for REF (Research Excellence Framework) and provide support and training for acadrmic members of staff to be enterprise active. Currently, the Enterprise income for the School is in the range of £1.8 M. The School has secured 50% of the University KTP projects and is awarded the largest consultancy project in Loughborough’s history (£900K).

After obtaining my first degree in Civil Engineering in 1983 (BSc. Civil Engineering, first class), I worked in industry with international construction consortia in large projects including the World Trade Centre, a five stars hotel and a major 10 million m2 touristic development. I held the roles of Designer, Site Engineer, Site Manager, Technical Manager and Project Manager between 1983 and 1991. In parallel, I have studied for an MSc. In Foundations Engineering which I was awarded in 1989. Then, I studied for another MSc. in Construction Management at Loughborough University in 1991 which I was awarded in1992 with Distinction.

I worked for a further year in industry as a Project Manager before I take on the post of a Research Associate at Loughborough University for the modelling and simulation of information flows at the design stage of construction projects in 1993. I was researching for my PhD in parallel and was awarded my PhD in 1996 then was appointed as a Research Fellow to work on a £2M EU project on the requirements for Large Scale Engineering Construction projects and also writing proposals to generate further research funding. I was appointed as a Lecturer in 2000, Senior Lecturer in 2004 and was awarded my Professorship in 2009. I was successful in securing large funds from the European Commission for EU research projects as coordinator or partner and hence appointed as Director of the School European Union Research Group (2001-2015) and the University Chair of the Horizon 2020 Funding Strategy Group (2014-2018). I served on the University Senate as an appointed member (2014-2019).

I was appointed as the School Associate Dean for Enterprise (ADE) in August 2017 to date, where I look after the School’s enterprise portfolio including consultancy activities, Knowledge Transfer Partnerships (KTPs), EPG projects (Enterprise Projects Group), partnerships with industry including contract research and funded PhDs, IP protection, commercialisation, in addition to nurturing the research impact culture within the School. I lead the development of the Impact Case Studies for REF (Research Excellence Framework) and provide support and training for academic members of staff to be enterprise active. I am also a member of the School SMT (Senior Management Team) where I assist the Dean in all aspects related to the management of the School. I led the School Athena Swan Bronze submission as ‘Co-Champion' in 2020. National and international recognition for my achievements has led to additional external prestigious roles as outlined in the sections below.

I led the School Athena Swan Bronze submission as ‘Co-Champion' in 2020.