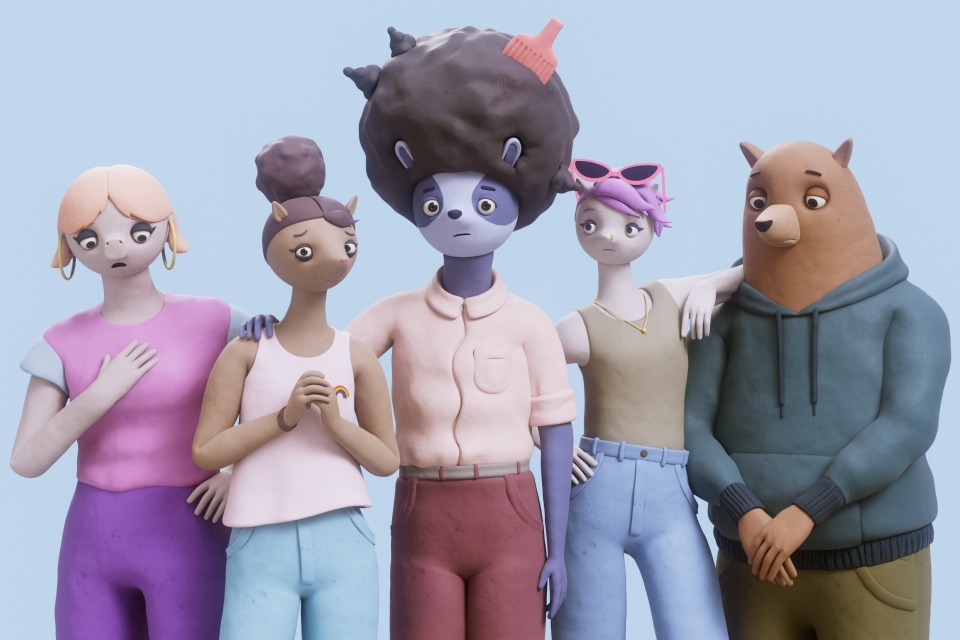 Characters from the 'What's Up With Everyone?' campaign.

Young people struggling with mental health issues arising from challenges such as loneliness, perfectionism and competitiveness, will be supported by a series of new animated films and companion website.

Aardman, the award-winning independent studio, has joined forces with a team of leading researchers - which includes academics from Loughborough University’s Storytelling Academy - and mental health charities on a campaign developed to encourage young people to become more aware of the factors that may be having a negative impact on their mental wellbeing.

Called ‘What’s Up With Everyone?’ and aimed at young people aged 17-24, the campaign sees the launch of a series of short films and has been uniquely co-created with the young audience it sets out to support, ensuring it has an authentic voice and is genuinely representative of the challenges to mental wellbeing faced by the demographic.

The films, which launch across social media this week alongside a supporting website, introduce five characters, each of whom is contending with an issue related to loneliness, perfectionism, competitiveness, independence, and social media - five of the most common issues negatively impacting young people, according to the campaign’s research.

The collaborative project, led by Professor Paul Crawford of the University of Nottingham, is informed by research commissioned and funded by the Arts and Humanities Research Council (AHRC).

The workshops included exciting group participation approaches that enabled young people to feel involved despite the physical distance due to COVID-19 restrictions.

The Loughborough researchers are also to host another series of workshops at a later date to evaluate the impact of the campaign films on young people’s mental health literacy.

Professor Wilson commented: “The Storytelling Academy at Loughborough has a longstanding interest in how storytelling can be applied to the field of health and well-being to contribute to better outcomes.

“This unique collaboration between ourselves and experts in mental health and animation allows us to develop our work in exciting new ways around creating agency for individuals through using storytelling to improve mental health literacy.”

The partnership – which also involves the London School of Economics and Politics; the Mental Health Foundation and mental wellbeing charity, Happy Space; and young people's mental health expert, Dr Dominique Thompson -  comes at a time when the pandemic has increased the focus on youth mental wellbeing, with reports that two-thirds of young people have experienced worse mental health during the period of lockdown restrictions.

A recent NHS survey also showed that one in six children and young people had a probable mental health disorder in July 2020, compared to one in nine in 2017, whilst the Office for National Statistics (ONS) discovered that more than half of all students at University (57%) reported a worsening in their mental health and well-being since the beginning of the autumn term in September 2020.

Speaking on the launch of the campaign, Daniel Binns, Animation Director at Aardman Animations, said: “We wanted to create content that could come up on someone’s social media and elicit the response 'I know that feeling'. We want people watching them to see a little of themselves in the characters and their stories and that be the start of thinking about how they feel, or cope and how it could be better.

“What really sets this project apart is that it's been co-created with young people at every step. Their input alongside those of our experts, has been invaluable and enlightening, enabling us to craft authentic and effective resources that can make a genuinely positive impact.”

To find out more about the campaign, visit:

About the research project

This Arts and Humanities Research Council (AHRC) funded collaborative campaign and partnership, led by Professor of Health Humanities Paul Crawford at the University of Nottingham, develops and evaluates the impact of a series of animated stories and a supporting website that aim to increase young people's mental health literacy. In partnership with Aardman Animations, the universities of Nottingham, Loughborough and London School of Economics and Politics, Mental Health Foundation, Happy Space and clinical adviser, Dominique Thompson, the overall project aims to deliver both a popular much-needed, upstream resource and evidence base in the area of young people’s mental health.

About the Arts and Humanities Research Council

The Arts and Humanities Research Council (AHRC), part of UK Research and Innovation, funds internationally outstanding independent researchers across the whole range of the arts and humanities: history, archaeology, digital content, philosophy, languages and literature, design, heritage, area studies, the creative and performing arts, and much more. The quality and range of research supported by AHRC works for the good of UK society and culture and contributes both to UK economic success and to the culture and welfare of societies across the globe. ahrc.ukri.org.

Aardman, based in Bristol (UK) and co-founded in 1976 by Peter Lord and David Sproxton, is an independent and multi-award-winning studio. It produces feature films, series, advertising, games and interactive entertainment - such as the ‘visually astonishing’ (Guardian), BAFTA® nominated console game, 11-11: Memories Retold, and the four-times Gold Cannes Lions-winning StorySign app - and innovative attractions for both the domestic and international market, including a new 4D theatre attraction at Efteling in the Netherlands.

Its productions are global in appeal, novel, entertaining, brilliantly characterised and full of charm reflecting the unique talent, energy and personal commitment of the Aardman team. The studio’s work – which includes the creation of much-loved characters including Wallace & Gromit, Shaun the Sheep and Morph – is often imitated, and yet the company continues to lead the field producing a rare brand of visually stunning content for cinema, broadcasters, digital platforms and live experiences around the world.

The studio runs the Aardman Academy which has a commitment to nurturing talent by delivering excellence in film and animation training and mentoring. The Aardman Academy offers a variety of courses from intensive one-day workshops teaching production skills and storyboarding, to comprehensive twelve-week courses for professionals in craft based subjects from model making to animation.

In November 2018 it became an Employee Owned Organisation, to ensure Aardman remains independent and to secure the creative legacy and culture of the company for many decades to come. www.aardman.com

Arts and cultureHealth and medicineResearchSocietyTechnology