Economist Dr Jon Seaton, of Loughborough School of Business and Economics, explains the difference a sudden onset of infection and a slow burn using chess and the children’s game tig.

Many of us have witnessed the smouldering levels of cases and fatalities from Germany, US and elsewhere suddenly give way to rampant and horrifying growth, writes Dr Seaton.

This is puzzling and frightening.

Although we have seen steady growth of cases after a slow start, in the UK – see graph below – the number of deaths was puzzlingly steady, consistent – about 40-50 cases – and low, relative to say Italy, Spain, China and the US, but with 180 deaths yesterday does this mean that it’s over?

Have we succeeded in flattening the curve or are we about to see the full impact of Brits shunning clear guidance on safety with massive surges of cases and fatalities? 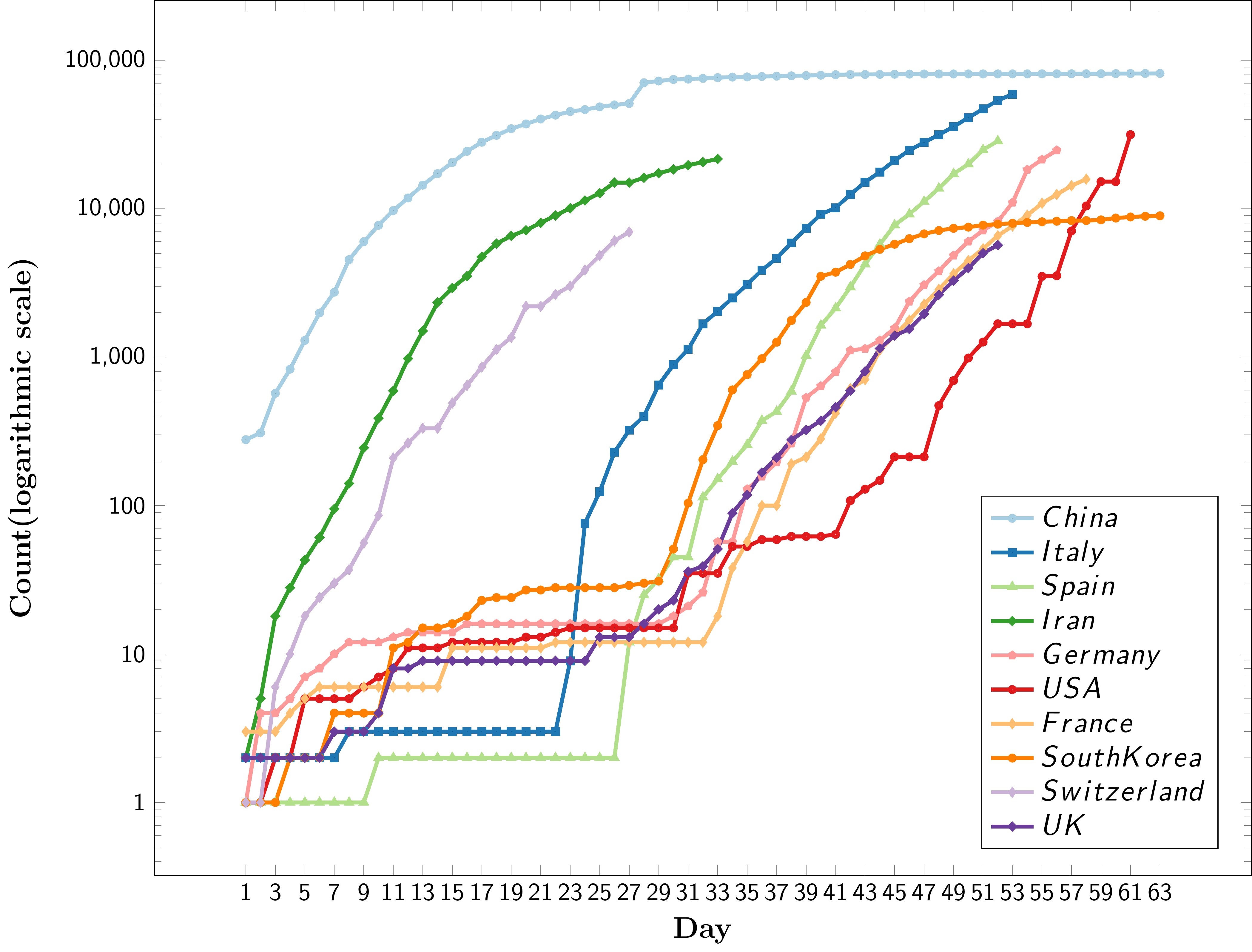 Here I use a simple game based on two classic favourites tig and chess.

A chess set contains 64 squares and has 32 pieces.

If we assume that all the pieces are randomly positioned, and we can place more than one piece on a square, then we can mimic the growth of an epidemic by infecting one piece and watching how it spreads.

As all the pieces move randomly across the board, the infection spreads.

This happens when infected pieces share the same square as healthy pieces, that is tig.

However, here everyone stays ‘on’ once tigged.

Here are a couple of illustrative graphs of the ‘cases of infection’ – they differ only by the random placing of pieces – but are markedly different.

The first graph shows two very different scenarios over 31 days (Horizontal) and our 32 individuals/chess pieces (Vertical) – both derived by playing this game.

In the first (yellow case) we see very rapid growth from day one.

Here the individual must have landed on a square occupied by a couple of other pieces right at the start and they moved on to infect others.

The cascade of rapid infection continued at the same rate.

In the second (purple case) a much slower start – here the infected individual took time to find the first victim – eight days, and again slower progression until period 22 where there was a marked rise in cases.

Now for this slower scenario, day 20/21 you would have been expecting the new infections to die down as progression was easing at that point.

But from day 23 onwards we see a very rapid increase to complete infection by day 30.

These plateau-to-jump situations are commonly seen in the initial real data graph above.

New infections are plotted for both scenarios in the second graph.

Clearly the latter case is more desirable from a healthcare point of view – flattening the curve, so to speak.

But flattening the curve gave us two pulses of infection and gave false hope to an early end to the epidemic.

Given that we do not know who exactly has the virus due to low levels of testing in the UK and the poor sensitivity of the test we have to be extremely careful in the analysis of the UK position.

Late starts, low apparent transmission and low death rate does not mean it will not happen.

The simulations show that although some country infection profiles show speedy consistent growth in cases and deaths, we often see a plateau of infection – or slow growth – followed by a steep rise.

If the rates seem lower than other countries (US, UK and India) often ordinary people, as well as leaders, will be lulled into a false sense of security, thinking they are immune, leading to poor hygiene and other behaviours, only to be hit by a sudden growth spurt in the infection – and deaths.

All counties need to set up appropriate protocols and facilities and be prepared to move from liberal democracy to full-on government control of food, medical supplies and more than anything, enforcing stay-at-home sanctions if they truly want to flatten the curve and eventually get back to work.

The diagrams of infection and deaths, above, clearly show this plateau effect.

This should act as a warning to world leaders, such as Boris Johnson – now infected - and Donald Trump, and countries ignoring the WHO with scientific advice on testing, medical facility capacity and equipment as well as early lockdown  – such as Sweden which is still not on in full lockdown and the US which is hoping to open up early in Easter.