A journey of love, loss, and incredible determination: Graduand uses her experience to help others 31 July 2020

Joanna Johnson has recently completed her final year of studies within the University’s School of Sport, Exercise and Health Sciences, with a 2:1 (Second Class, Upper Division) degree in Psychology.

Her university experience has been far from the typical one, though. Many students soar through university and describe it as the best time of their lives, making friends for life and taking advantage of all the sports, societies, and other opportunities available.

However, for Joanna, her experience has been much harder as she’s bravely overcome difficult life challenges, highlighting just how resilient she is. Here we proudly share her story of love, loss and incredible determination.

Back in January 2018, Joanna was on her placement year in London. Her mum, Rosemary, received the devastating news that her blood cancer had relapsed and so she would need to start chemotherapy and a stem cell transplant.

Meanwhile, Joanna had recently started to experience distressing symptoms of her own, such as loss of appetite, night sweats, fatigue and itchy feet. She went to see her GP but was sent away as she was deemed fit and healthy.

By April, Joanna started to feel much worse, to the extent that her mum picked her up and drove her back to their home in Bristol. A few evenings later, she found a lump the size of a lemon on her neck and noticed her heart rate was significantly high.

She went back to the doctor’s the following day and after being referred to have an urgent biopsy of the lump and an x-ray of her chest, she first heard the words ‘Hodgkin Lymphoma’ being said aloud by a health professional regarding her condition.

After the doctors received the results, she was admitted to hospital and then moved to the Teenage Cancer Trust ward. Following various scans and blood tests, Joanna started chemotherapy for Hodgkin Lymphoma and was told she would need 12 rounds at two-week intervals.

At this point, she was also told if she did not respond well to chemotherapy the treatment would be escalated, which would result in a high chance of Joanna becoming infertile.

“As a 22-year-old hearing those words, I think that was one of the hardest things for me to contemplate. I was told I would lose my hair, but I had already seen my mum’s hair fall out from her treatment and I knew there were far worse problems in the world than some hair on my head,” she said.

The doctors became increasingly concerned with how extensive Joanna’s cancer was, after finding tumours surrounding her left lung, her heart and also in her clavicle.

Nevertheless, Joanna and her mum continued to remain positive as they shared this experience together, making each other laugh along the way: “I remember going for my second round of chemotherapy, and the nurses saw me and my mum and said ‘Oh Rosemary take a seat, we’ll be with you in a minute’ as my mum was also receiving treatment for blood cancer. We had to explain we were there for me to receive the chemotherapy and not my mum, which we found really amusing at the time.” 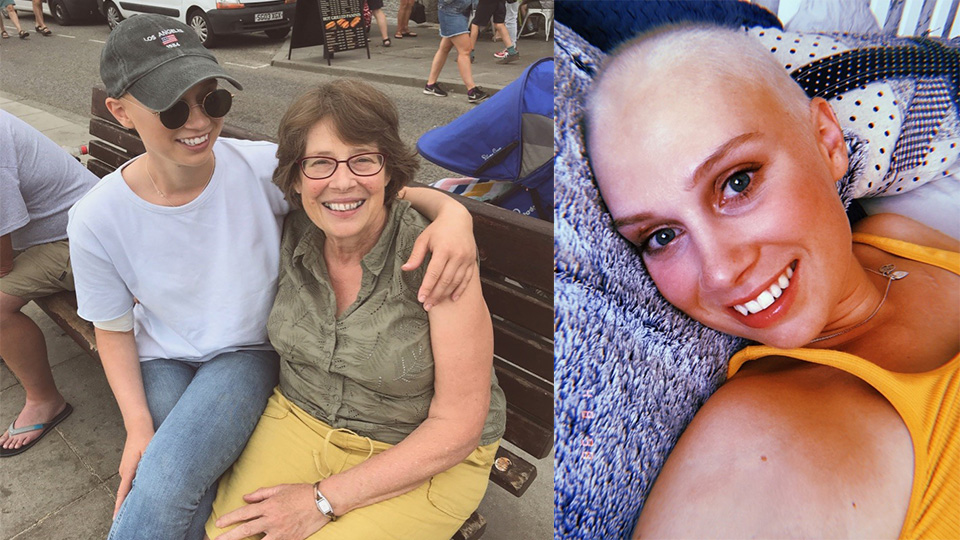 During her treatment, Joanna at times experienced severe side effects, such as a sore mouth leaving her unable to eat and agonising stomach pains.

Miraculously though, Joanna’s body responded to chemotherapy significantly well after four rounds, and the doctors shortly after told her she was in remission as there was no evidence of disease (NED) present. She continued to receive the other eight rounds but could now return home to rest.

“The thought of returning to University in October is what I think motivated me to continue with my treatment. In my head, each session of chemotherapy was a step closer back to normality; going on nights out with my friends and laughing at the events that unfolded the next day,” said Joanna.

The reality of returning to University became much harder for her upon arrival, however. She quickly realised she was not ready to face a ‘normal’ life, lacking confidence and a sense of self-identity whilst still recovering from what had happened. Just going to the supermarket seemed a huge task for her. Because of this, she made the decision to take a leave of absence.

Talking about this time, Joanna said: “I’m glad I took a decision to take a leave of absence, as the following few months entailed constant fatigue and worry of the possibility of relapse. As time went on, I felt more and more like myself; my hair began to grow back, and everything seemed to return to normal. Not only that, but I wanted to support my mum as she was going through her treatment too.”

Her mum had chosen to postpone her own second stem cell transplant so she could fully support Joanna until she had finished her chemotherapy. Between herself, her mum and her sister, they agreed 2019 would be a year of good health after having such a difficult year previously.

But tragically, in May 2019 Rosemary started to feel extremely unwell. She was asked to have a number of tests and Joanna had known in the past her mum was incredible at bouncing back to herself, however, this time the doctors said the cancer had spread extensively. They suspected it to be a relapse of the oesophageal cancer she had back in 2016 and explained there were few options left.

Joanna said: “My mum made jokes right up until the end, and I will forever remember her as the woman to find the positive in any situation. She passed away peacefully in a hospice in July 2019. Having been so reliant on her not only for the past eighteen months but my whole life prior to that, knowing I was never going to see her again was agonising and something I still haven’t come to terms with.

“However, I knew that I needed to finish my degree. She had always wanted me to do it, and constantly told me I should get it started.”

Despite her incredibly difficult journey over the last two years, Joanna used her experience to help other future students across the country. Determined to make a difference, she chose to write her dissertation about students’ experience of returning to university after a leave of absence due to undertaking cancer treatment.

Seven female students from various universities participated in the project, and Joanna hopes that by writing this she can help institutions understand how best to support returning cancer survivors.

“She is an amazing example of how Loughborough students strive to achieve the best that they can, even in the face of huge adversity, and it has been an absolute pleasure working with her.”

Joanna added: “I felt lucky that Loughborough had been so supportive to me in comparison to some of the participants’ experiences. Adjustments were made when I needed them, and I was told about the various resources available such as the Wellbeing and Counselling teams which proved helpful to me.

“The road to completing my degree has had many hurdles, which I didn’t think I would experience when I first arrived at Loughborough five years ago. I feel relieved to have overcome these challenges, and I know that my mum would be so proud of me too.”

Her personal tutor Dr Laura Houldcroft said: “Throughout all the adversities she has faced, Joanna’s dedication and tenacity has been, quite simply, overwhelming. I’m incredibly humbled by her strength and resilience both personally and academically, and I wish her every success in the future as she graduates from Loughborough.”