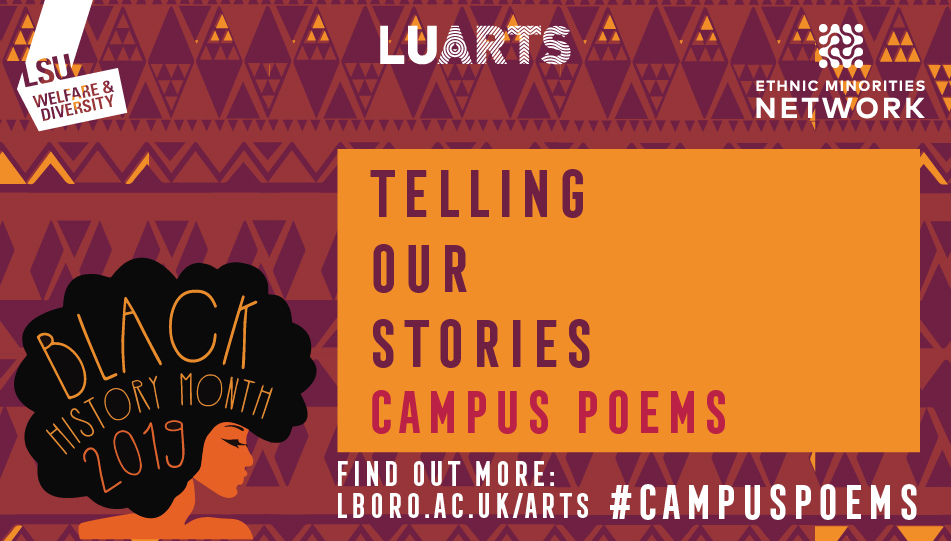 As part of Black History Month, LU Arts – the University’s arts programme – has produced a collection of poetry which will be showcased at Loughborough University.

Telling Our Stories features 11 poems by contemporary black British poets curated by writer Indigo Williams. From Zimbabwe to Nigeria to London, the poems cover themes of ethnicity, family, home, and what it means to be a black British person.

Each poem presents a distinct voice that shares stories of the past, present and future that have influenced who they are and how they see themselves.

The collection will be displayed across the campus throughout October, with poems situated in bus stop shelters, stairwells, Student Village noticeboards and common areas, as well as on digital screens.

It also features the work of current Loughborough student Ada Ughanwa, a recipient of the 2018/19 Arts Scholarship in Creative Writing.

Tara Nadi, Chair of LSU’s Ethnic Minorities Network commented: “I’m so happy to see the poems displayed around campus, as I feel they help give Black History Month at Loughborough a real voice.

“These poems have all been written by Black poets, and it’s an honour to support their work. I hope that everyone who comes across the poems will take a few seconds to read them, as each of them explains an aspect of Black life and history in a talented way.”

The collection features the following:

Indigo Williams is a British-Nigerian poet, writer and spoken word educator from Brixton. She is passionate about the ways in which art can transform how we perceive the world and its ability to facilitate critical consciousness.

The full events programme aims to honour the contributions, achievements and histories of black people among our staff, students and wider community. More information can be found here.