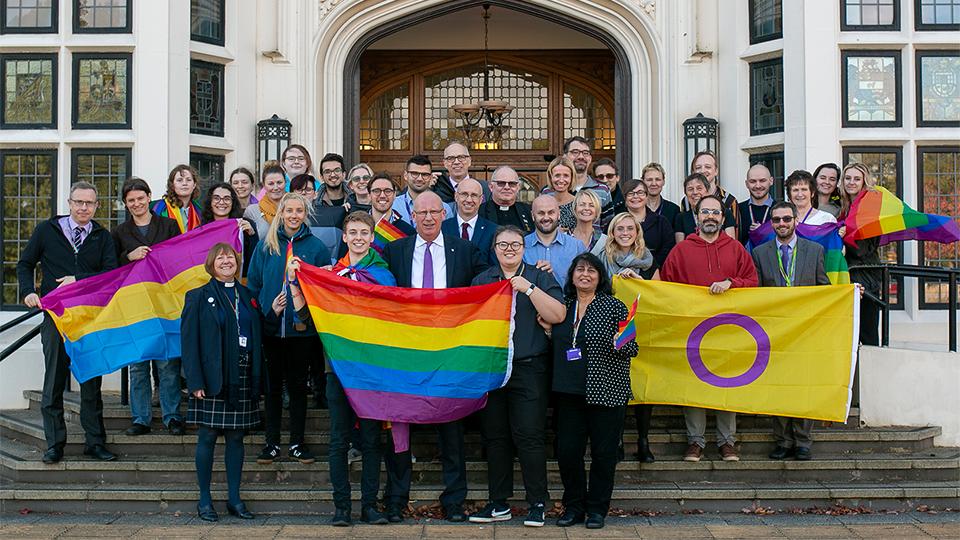 Loughborough University is proud to announce that it has been named a Stonewall Diversity Champion.

The news was celebrated with an event which took place on campus yesterday (Tuesday 29 October) with staff and students from the University and Loughborough Students’ Union (LSU) – including the Vice Chancellor Professor Robert Allison - in attendance.

By becoming a Stonewall Diversity Champion, the University is officially recognised as an institution that aims to provide a supportive and inclusive environment for the LGBT+ community.

Loughborough will work closely with the organisation – which is one of the most historic and influential LGBT+ charities in the UK – and receive support and backing of LGBT+ inclusion and support initiatives.

Benefits of the partnership include access to educational events, training and conferences held by Stonewall; promotion of job adverts on Stonewall’s dedicated job site; and inclusion within their Careers Guide which highlights Britain’s most inclusive workplaces and is sent annually to schools, colleges, LGBT+ youth groups and universities across the country.

Chair of the LGBT+ Staff Group, Bethan Fagan said: “Loughborough University becoming a Stonewall Diversity Champion is a hugely important step in making our campus the most inclusive and supportive institution it can be.

“This partnership allows us to work directly with Stonewall to seek guidance on all manner of things, such as policies and event organisation. It’s a badge we’ll be able to use to show students, staff and those external to the University that we’re committed to supporting the LGBT+ community.”

Stonewall is an organisation which was founded in 1989 and campaigns for the equality of gay, lesbian, bisexual and transgender people across the UK. It works with over 750 organisations and has been successful in lobbying for change in legislation on same sex marriage, the Equality Act, and the right for same sex couples to adopt.

Talking about the announcement, Professor Robert Allison commented: “Today is, I’m delighted to say, another day for celebration at Loughborough University.

“We’re celebrating becoming Stonewall Diversity Champions, and this brings together staff and students who are members of the LGBT+ community within the #LboroFamily. It demonstrates our commitment to diversity on campus and particularly supports LGBT+ people so they know they are valued, integral and essential members of the Loughborough University community.”

To find out more about the University’s LGBT+ Staff Group, click here.

Further information about the students’ LGBT+ Association can be found by visiting their Facebook page.