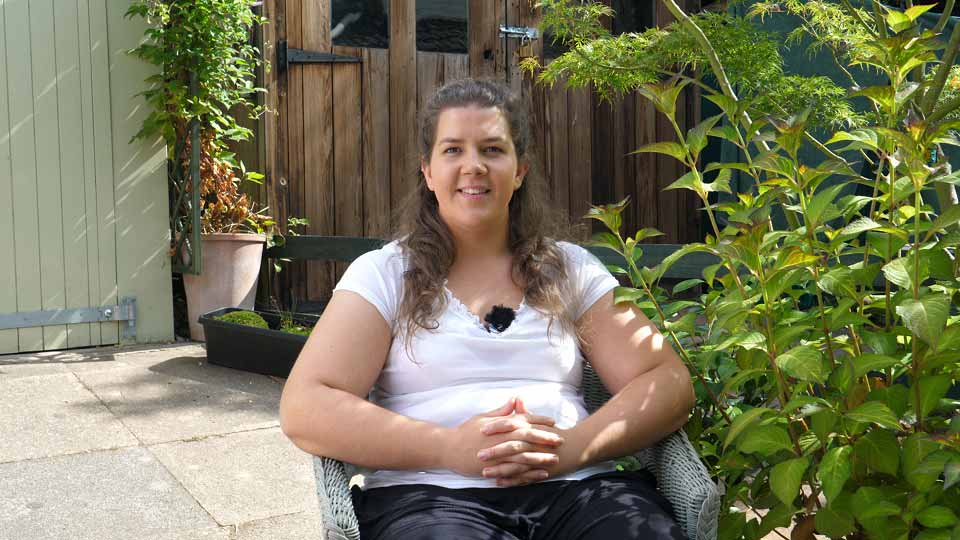 Emma is one of the students who features in the independent films which celebrates diversity in science.

Four inspiring films featuring students from Loughborough University are being shown to celebrate diversity in science as part of British Science Week.

Four inspiring films featuring students from Loughborough University are being shown to celebrate diversity in science as part of British Science Week.

The films, produced by Dr Irina Linke from Germany, document the students’ journeys into the world of science.

They will be shown at 5.30pm on 14 March at Flix Cinema, Loughborough University.

Featuring in the films is Jeff Dick, a transgender man who is studying Computer Science and Mathematics.

Jeff has been interested in maths since he was a child and knew he wanted to study it at university.

He said it wasn’t until he was studying for his A-levels, that he discovered his love of computer science.

As well as being able to study the subjects he loved, Jeff found that going to university helped him to grow as a person.

He said: “I think university helped me to adapt to things better. Before I came to university, I used to find it hard to make friends and talk to people.”

“For a while, I had wanted to come out as transgender.

“When I came out, it went really well and I don’t think I faced any difficulties while at university because of it.”

Rhush, who is originally from Zimbabwe, is a PhD student studying Analytical Chemistry.

He came to the UK in 2008, after parents became concerned about the unrest in Zimbabwe.

Rhush thought he wanted to follow his family’s tradition and become an accountant.

It was only when he moved to England and studied for his GCSE’s and A-Levels, that doors started to open in the field of science.

“I wanted to do something that helped mankind in the future.” he said.

“Coming to university opened my eyes. I realised there were thousands of other students that came from a similar background to me, who weren’t used to the British culture. It made it easier to fit in.”

Sam is studying for a master’s degree in Analytical and Pharmaceutical Science.

Born in Nigeria, Sam and his family moved to Ireland in 1993.

“When I was younger my dad was really good at maths and he used to teach me,” he said.

“I fell in love with chemistry and maths when I went to secondary school. I find chemistry very interesting and I find it a way of life.”

“I want to use science to help people. I hope to one day in the future have a foundation to help the less privileged in the world.”

Emma is a mature student studying for a master’s degree in Physics.

She said: “I originally wanted to study physics when I left school, but I didn’t have particularly good grades, so I looked at engineering as an alternative.”

Emma studied mechanical engineering and realised it wasn’t for her, so she decided to pause her education and started working.

“I found out that by going through a foundation programme, I could take a pathway to study physics and that’s how I ended up on the course.”

She said there aren’t any challenges being a mature student and it is an advantage.

“I know more about myself and know what I want. I’m more confident,” she said.

‘Faces of Women in Mathematics’ made by Dr Irina Linke, will also be shown during the screening.

At the end of the films there will be panel discussion on the topic of diversity in science.

Dr Eugenie Hunsicker, Director of Equality and Diversity in the university’s School of Science, at Loughborough University, said: “Whether science is studying molecules, the universe or numbers, it is a social and human activity.

"The diversity of people engaging in that activity is a huge strength for the subject, as different minds with different experiences approach the problems in different ways, and that is how we make progress.

“I am really thrilled with these films that showcase the fantastic diverse science students at Loughborough, and I hope they will inspire younger students to see how their own differences can contribute to the success of science."

Connor Butler, chair of Flix Loughborough Student Run Cinema, said: “Its a privilege for Flix to host the premier of these new films for British Science Week, showcasing diversity in science. It’s our hope that this inspires diversity within the field, something that Flix is committed to as a whole when choosing our programme each year.”