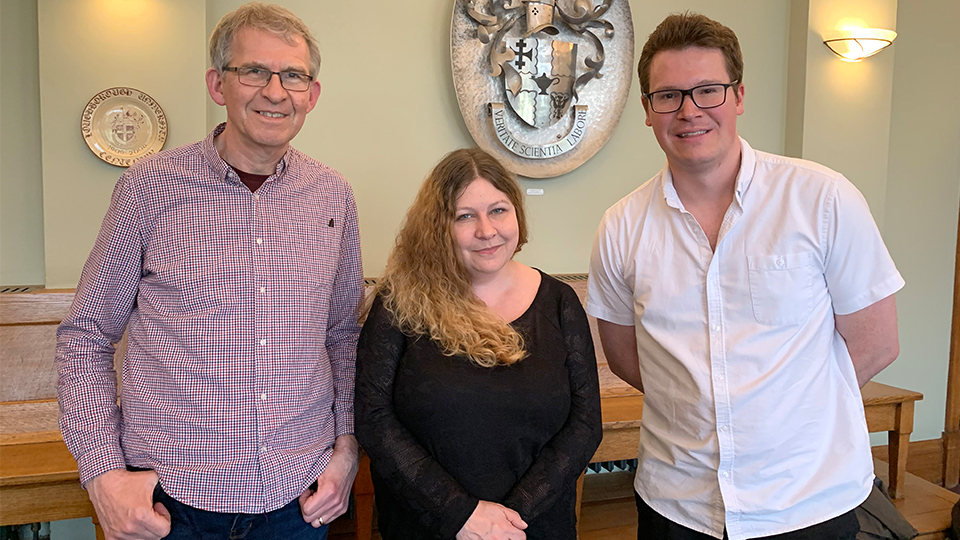 To mark World Poetry Day (21 March), academics from Loughborough University have come together to launch season two of the ‘School of Poetry’ podcast.

The School of Poetry podcast ‘celebrates the exciting world of poems and poets, including the great and not so great.’

Hosted by Dr Oli Tearle – an author and Lecturer in English - he is joined in this latest episode by fellow colleague’s Dr Andrew Dix and Dr Anne-Marie Beller, who are also from the University’s School of Arts, English and Drama.

The theme for this edition is ‘poetry firsts’, and features the work of Lewis Carroll, T.E. Hulme, Anne Bradstreet, Sterling A Brown and John Updike.

Dr Beller discusses her love for Lewis Carroll’s Jabberwocky, acknowledging how the poem is creative, expressive and magical to read, and although much of the poem is written using made up words, you are still able to follow the story throughout.

‘A Letter to her Husband, absent upon Publick employment’ by Anne Bradstreet is introduced to the episode by Dr Dix.

The poem, from 1678, follows themes of female behaviour and domestic duties expected during this period in America.

The regular segments of ‘So Bad, It’s Good…’ and ‘One From the Vaults’ also feature, and listeners are treated to a double dose in celebration of the season two launch.

Mary Elizabeth Braddon – who is better known as a sensationalist novelist from the Victorian era – has her poetic work discussed as part of ‘One From the Vaults’, as does African American writer Sterling A Brown.

They trio also discuss the subject of whether rap can be considered poetry, talking through the different elements of traditional poetry and musical rap.

Lecturer Dr Andrew Dix specialises in American Literature and Film, with particular interests such as  African American culture and twentieth and twenty-first century US fiction.

Be sure to subscribe to the channel so you can be alerted to the next episode, where Dr Tearle and guests will discuss poets and their pets.

A clip from the podcast can be listened to below, where the trio discuss one of the So Bad, It’s Good… poems, ‘The Beautiful Bowel Movement’, by John Updike.