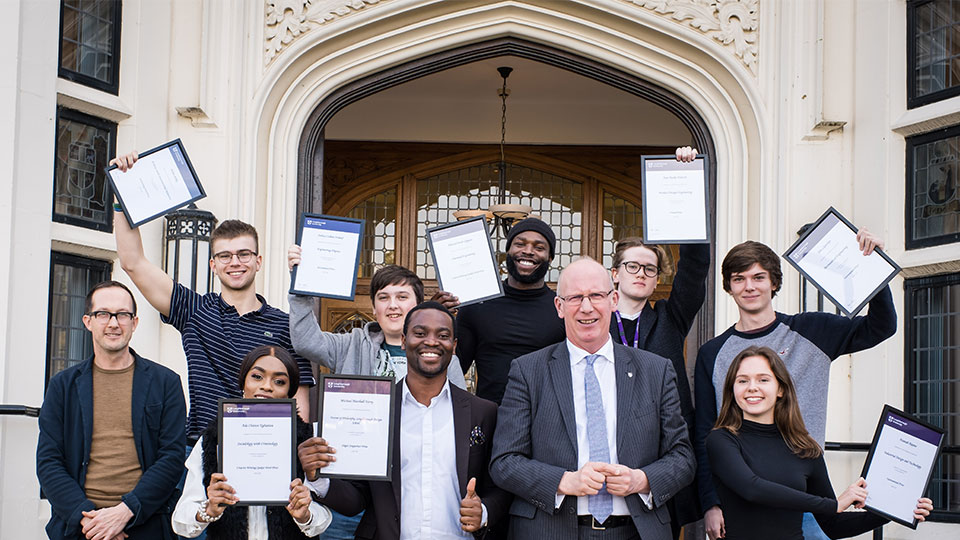 Five students who received music scholarships from LU Arts this year will perform pieces of their choice in a lunchtime concert on 8 May at the Cope Auditorium at 12.30pm.

Five students who received music scholarships from LU Arts this year will perform pieces of their choice in a lunchtime concert on 8 May at the Cope Auditorium at 12.30pm.

The concert is an opportunity for the scholars to share their talents with staff, students and the wider community and is part of their overall contribution to the creative life of the campus, helping to raise the profile of the arts within the student community.

Kooman and Diamond: Lost in the Waves

Daniel is a final year Communications and Media student who was recently awarded an LCM Diploma in Musical Theatre, supported by his music tutor from LU Arts.

He became involved in musical theatre at the University when he joined LSU Stage Society and landed the lead role of Link Larkin in their production of Hairspray.

Lin-Manuel Miranda: You’ll be back (Hamilton)

Sean’s interest in singing was piqued when he attended an Eton choral course during his last year of sixth form. He has since sung at Westminster Abbey and St Peter’s in Eaton Square with the Cardinal Vaughan Memorial School’s Schola Cantorum.

He has also performed in musical productions, reflected in his choice of songs for the evening and is keen to expand his vocal capabilities and branch out into new musical genres.

Hannah founded the University’s first flute choir and is also an active member of the LSU Classical Society’s Orchestra. The final year Industrial Design student has been playing the flute since she was seven and enjoys exploring the character of the music and expressing it through techniques and personal performance.

First year Aeronautical Engineering student, Ifan, is a member of Tuxedo Swing and the LSU Classical Society. A multi-instrumentalist, he has achieved Grade 8 on trombone and a diploma on the violin. Outside of term time, he is also a member of the National Youth Wind Orchestra and the Orchestra of Wales.

Playing in local and national ensembles since the age of eight, including the National Youth Brass Band of Wales, Joshua is a member of Tuxedo Swing and LSU Classical Society. He enjoys playing both the drum kit and general percussion and plans to continue playing in ensembles for the remainder of his time at Loughborough.

The music scholars’ concert is free to attend and open to all. Places can be booked in advance via the LU Arts website or you can turn up on the day.

Scholarships are awarded to those with a high level of musicianship. The aim of the scholarship is to develop the student’s talent through tuition and mentoring in return for a contribution to the creative life at the University.

Past recipients of the music scholarships have gone on to pursue careers in music, including opera singer Ian Storey and folk singer Tom Kitching.

There are nine arts and music scholarships available each year including music, creative writing/spoken word, singer-songwriter and performing arts. Each winner receives a package of tuition or mentoring to help develop their skills. In addition to this, there are opportunities to perform at University events and contribute to the LU Arts events programme.

The creative writing/spoken word scholars Michael Asolo and Ada Ughanwa and singer-songwriter scholar Michael Harry will be showcasing their talents as part of Loughborough Students’ Union’s annual Freefest event on Monday 6 May alongside other talented students.