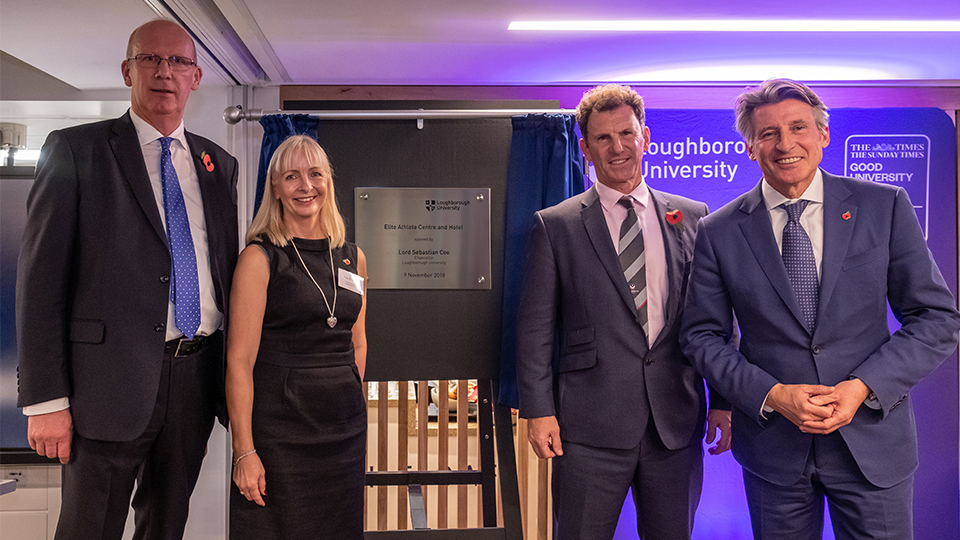 The facility – which has been developed in partnership with UK Sport, Sport England and the English Institute of Sport – is the first of its kind in the UK, offering an holistic support environment for individuals and teams at both elite professional and dedicated amateur levels. It is managed by Imago Venues, the University’s award-winning conference, hotel and events brand.

Loughborough University’s Vice-Chancellor, Professor Robert Allison, said: “I am delighted that our Chancellor, Lord Sebastian Coe, one of Great Britain’s true sporting legends, has officially opened the Elite Athlete Centre and Hotel at Loughborough. The new facility offers something unique within the UK and will undoubtedly help us to reinforce our position as the country’s leading university for sport.”

The Elite Athlete Centre and Hotel has 44 twin ensuite bedrooms, including 20 cutting-edge altitude rooms. These rooms allow athletes to adjust the climatic conditions, enabling them to sleep in environments that simulate altitudes of up to 5,000m (the equivalent of Everest base camp) while being able to maintain their regular low-altitude training programmes.

The ‘sleep high, train low’ method is believed to have a positive impact on athletes’ performance capability.

Sleeping at high altitude can stimulate the production of red blood cells and haemoglobin (the protein inside red blood cells that carries oxygen around the body). When athletes return to sea level, their bodies have an increased oxygen-carrying capacity which means more oxygen can be delivered to their muscles. This makes exercise more efficient which can have significant performance gains.

Every bedroom is accessible and eight of the rooms, including four altitude rooms, are fully DDA (Disability Discrimination Act) compliant.

The Elite Athlete Centre and Hotel also has a specialist nutrition room to meet athletes’ complex dietary requirements. The menus, which have been developed in conjunction with James Moran, Performance Nutritionist at the English Institute of Sport, include diets with a high iron content to compliment the ‘sleep high, train low’ training approach. The menu options are also scalable, meaning that athletes, their coaches and nutritionists can choose to have more or less of each individual element to suit their requirements and training needs.

James Moran said: “The advantage of the Elite Athlete Centre and Hotel means that as well as having outstanding facilities, we’re able to collaborate with partners to offer world class nutritional support and positively influence athletes’ diet.

“The menu and nutritional philosophy we’ve designed specifically meets the bespoke needs of the elite athletes the EIS works with. This ensures the right combination of taste, presentation and nutritional value.”

Bespoke packages are available to provide guests with access to the University’s world-class on-campus sports facilities, including the indoor athletics centre and outdoor stadium, sports halls and all-weather pitches, a 50-metre swimming pool, squash, badminton and netball courts, an indoor tennis centre and outdoor courts, and state of the art fitness centres.

Athletes are also able to benefit from the world-renowned performance support services at Loughborough University, including a performance laboratory, a sports medicine and physiotherapy clinic, and expertise in strength and conditioning, performance analysis, physiology, and sport, exercise and health sciences.

“No other place in the UK is able to offer this combination of outstanding facilities, sports science, strength and conditioning and performance coaching as bespoke packages tailored to performance targets.”

“As part of the Elite Training Centre network this development plays a vital role in preparing and inspiring our athletes alongside the next generation of talented young people to compete at the highest level. The centre will offer a step-change in elite training provision across the UK, combining the University’s world-class sports facilities with excellence in athlete nutrition, recovery and accommodation.”

Chelsea Warr, Director of Performance at UK Sport, added: “Loughborough’s Elite Athlete Centre and Hotel brings together all the key elements that allow an elite athlete to prepare without distraction in order to be the very best in the world.”

Bookings for the Elite Athlete Centre and Hotel can be made online at www.eliteathletecentre.co.uk

Lord Sebastian Coe graduated from Loughborough University in 1979 with a BSc in Economics and Social History and was appointed as the University’s Chancellor in 2017.

During his athletics career he set 12 world records and made Olympic history by winning gold and silver in the 1980 and 1984 Games.