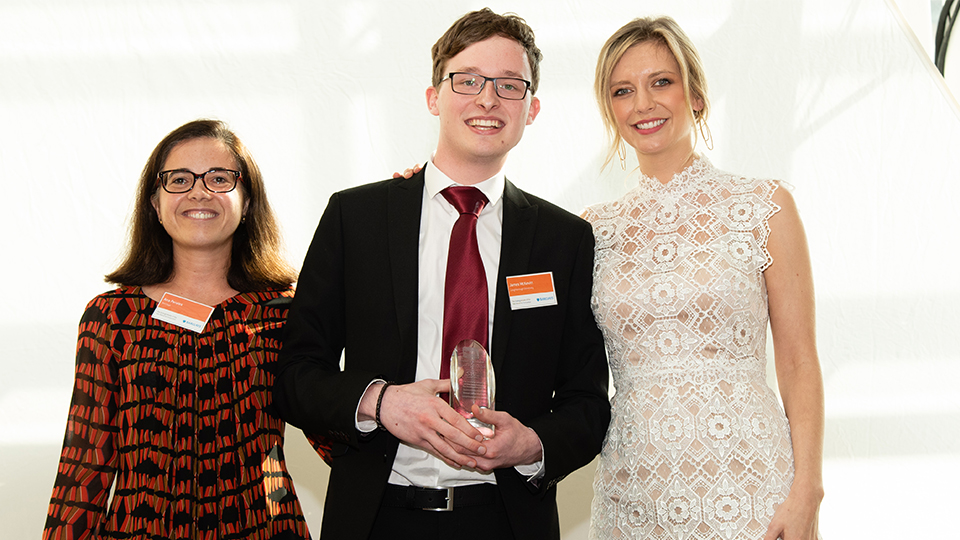 Loughborough student named Undergraduate of the Year 4 May 2018

James McKevitt, a first year student in Aeronautical Engineering, was announced as the winner at the awards ceremony which took place in Canary Wharf, London, earlier this month.

With over 3,336 applications and 120 student finalists attending the awards ceremony, James was one of 12 winning recipients on the evening.

The award, sponsored by Barclays, searched across the UK for a university student with great drive, strong entrepreneurial and digital skills, and a passion to learn more and help others.

The process of the competition required James to sell himself through an application form and take numerous online tests. He then visited Barclays HQ in Canary Wharf to pitch an innovation idea to a panel of senior Barclay’s staff, including technology and innovation directors. His idea centred around a new way of using data from space, a largely untapped market in James' eyes, and now those of Barclays.

James is Head of Rocketry and Projects for the Loughborough Space Society. He has worked with both staff and students to create outreach activities for Year 10 students, inspiring them to study STEM related subjects in higher education.

Furthermore, James has previously been awarded an international space scholarship, which gave him the opportunity to meet engineering staff from NASA in Florida. He has also worked with companies including TfL and London Underground.

James will receive a two-week summer internship with Barclays as a result of winning the prize, alongside membership of Barclays Eagle Labs for one year, a subscription to RISE as well as a Fitbit Blaze. This will allow James office space in London for two days a week and support from the Barclays network, meaning he has the ability and support to pursue his innovation.

Of the award, James said:

"I found the experience thoroughly enjoyable and really beneficial to my future job and internship applications.

“The online testing and assessment centre activities were great practice, and I learnt a lot for future applications.

“The award could have easily gone to any of the people shortlisted in my category. It was truly inspiring to meet such a large group of very passionate undergraduate students and a privilege to be considered alongside them.”