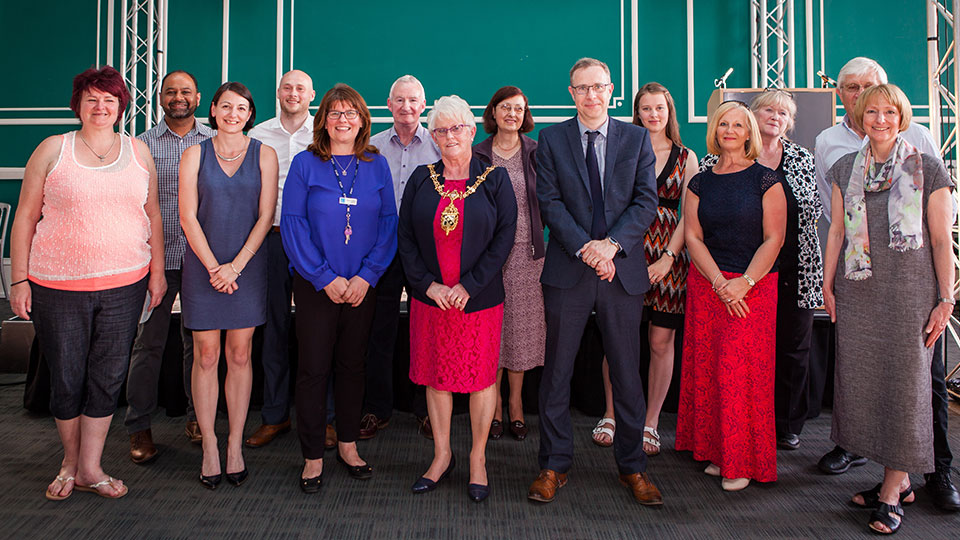 The Mayor of Charnwood, Councillor Pauline Ranson, was also present for the awards, which were bestowed by the University’s Chief Operating Officer Richard Taylor and Chair of the Community Donations Fund Committee, Jon Walker.

The student winners of the Community University Prizes were each presented with a cheque and certificate, and successful applicants to the University’s Spring Open Fund received their donations.

Sam Vesty, the recipient of the Hannah Community Prize, was commended for her dedicated involvement in Girlguiding, as well as her hard work in organising one of LSU’s Action Projects in supporting local care homes.

The TS Shipman prize was awarded to Leila Wilmers, Peny Sotiropoulou and Cuomu Zhax, for their work with the community in organising the 2017 ESRC Festival of Social Science, which took place in Loughborough for the first time in November last year.

Nine Charnwood community organisations each received a cheque to fund their respective projects, having been successful in the spring round of the University’s Open Fund. They included:

The annual Community Donations Fund programme, which has been operating since 2009, supports groups around Charnwood by awarding donations of up to £750 and has now donated to over 300 Charnwood organisations.

Stakeholder Relations Manager at the University, Alison Barlow, said: “We’re delighted to be supporting some fantastic organisations with their projects for another year.

“Many of these groups do amazing work for the community but often face financial difficulties which makes it hard for them to run the projects or activities they’d like to. We’re happy we can lend them a hand and act as a support system.”

“We would like to thank everyone who took the time out to submit a bid to our Community Donations Programme and look forward to supporting more groups later this year.”

To find out more about the Community Donations Fund, see our website or contact Jessica Metson on j.metson@lboro.ac.uk.