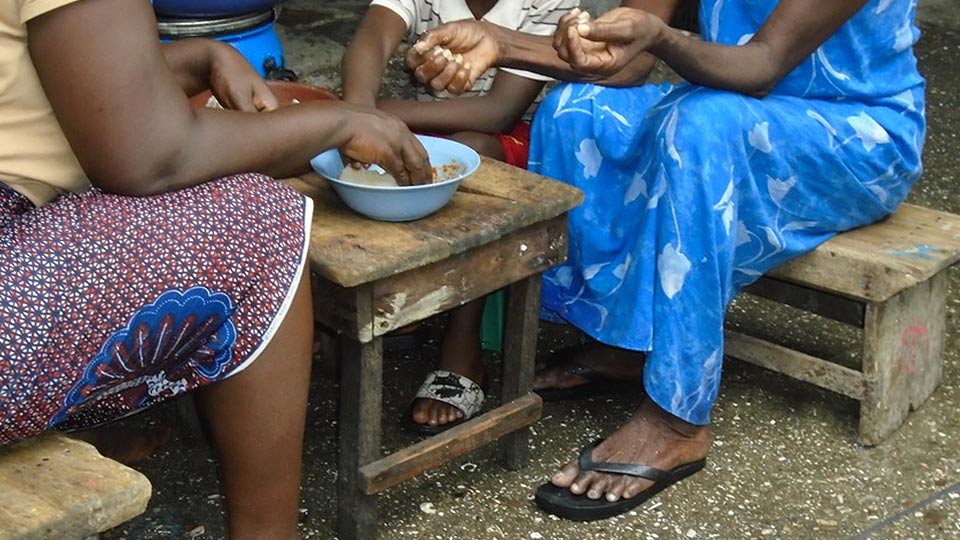 An image captured by a project participant in Accra.

People in Ghana have captured images of what drives what they eat and drink as part of a collaborative international project involving Loughborough University academics – and the photos are being exhibited this week.

It is hoped the 'photovoice' project, led by Professor Paula Griffiths, of the School of Sport, Exercise and Health Sciences, will increase understanding of food drivers, give people a platform to share their stories and encourage policymakers to take action to improve the food environment.

The work is part of two larger research projects – being led by the School of Health and Related Research at the University of Sheffield – that have brought together universities in Ghana and the UK to investigate drivers of dietary changes in Ghana.

Ghana, like many other African countries, is currently experiencing a rapid change in lifestyles, including increasing migration to cities.

These changes have resulted in people having unhealthier diets in urban areas and an increase in diseases such as obesity and diabetes.

But there is limited understanding of the factors that lead to dietary change in Ghana – particularly the role that social and physical environments play.

For the photovoice project, almost 100 women and men in the capital city Accra and the smaller provincial city of Ho were given a camera for a week and asked to photograph the things that influence how they eat.

From young children influencing dinnertime meals, to poor sanitation in streets, to vendors that take precautions to keep food fly-free; participants photographed a variety of subjects and scenarios.

Males and females of different ages, levels of education and socio-economic backgrounds were also interviewed by the project team to capture a wide range of views.

Although data is still being transcribed and analysed, Professor Griffiths says certain themes can already be drawn from the photovoice project.

She said: “Our early findings suggest that in Ghanaian cities there are some factors that are the same as the UK in driving food choices, such as cost of food, preference for certain foods and who we eat our food with. However, there are also differences.

"At this stage, it is clear that the support people receive from family and friends is crucial in shaping their diets.

"Family members seem to influence food choice in a number of ways; by being in charge of the cooking of meals, by providing advice on the type of foods consumed and on the source of provisioning of these foods, and by following family's food preferences and needs.

"This means that interventions would have to take a whole community approach to shaping dietary food choices.

"It's also clear that the remaining high prevalence of infectious diseases related to poor food and safety practices and unclean water means that people in Ghana have to think about health in two ways when making decisions about what to eat.

"The primary concern is avoiding immediate infection with prevention of non-communicable diseases like heart disease and diabetes being secondary to remaining immediately healthy.

"This adds an extra challenge to designing interventions to reduce the rising prevalence of obesity in Ghana."

Two exhibitions - one in Accra (26-29 June) and the other in Ho (29 June -2 July) - are to showcase the images captured by the respective community members. 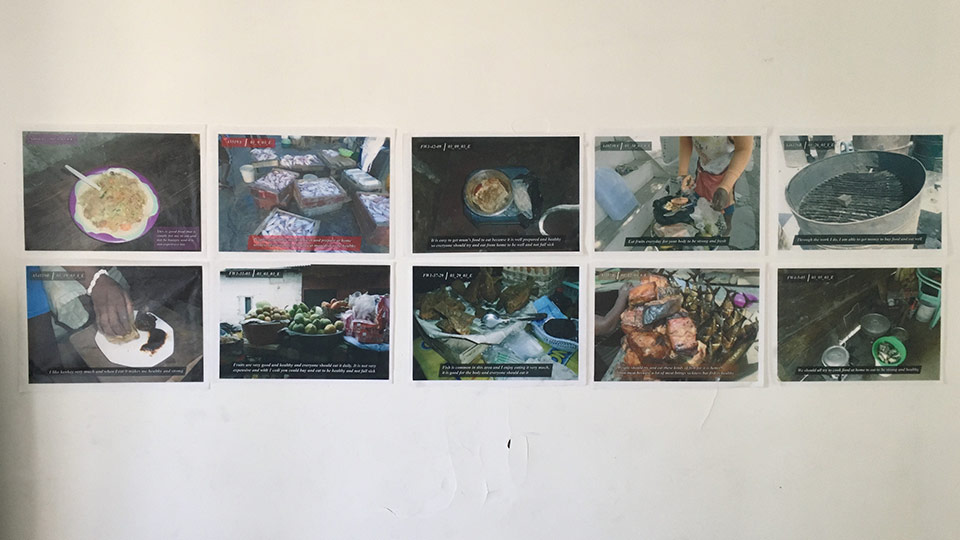 Photos on display in the Accra exhibition.

Professor Griffiths says initial feedback has revealed participants felt “empowered by the camera” and they are hopeful that policymakers attending the exhibitions will take some of their stories and evidence to various committees and working groups to improve their food environment.

Both exhibitions have been organised by the teams in Ghana in collaboration with Dr Marco Bohr, of the School of the Arts, English and Drama.

Dr Bohr says the experience has been a “real learning curve" and he has had to take into account factors he would not have necessarily considered for other shows.

For example, the exhibition openings are being held in the morning as people in Ghana are often busy in the evenings with their families.

He commented: “The work that has been produced by the community is so revealing and full of fascinating detail. To me, the exhibitions are important because they reveal the latent potential in all of us to tell very convincing stories full of humanity.”

Once the photovoice project data has been fully analysed, the findings will be disseminated through various formats, including conference presentations, academic publications and stakeholder meetings.

The projects are funded by the Drivers of Food Choice (DFC) Competitive Grants Programs - which is funded by the UK Government’s Department for International Development and the Bill and Melinda Gates Foundation, and managed by the University of South Carolina, Arnold School of Public Health, USA - and by a Global Challenges Research Fund Foundation Award led by the MRC, and supported by AHRC, BBSRC, ESRC and NERC, with the aim of improving the health and prosperity of low and middle-income countries.