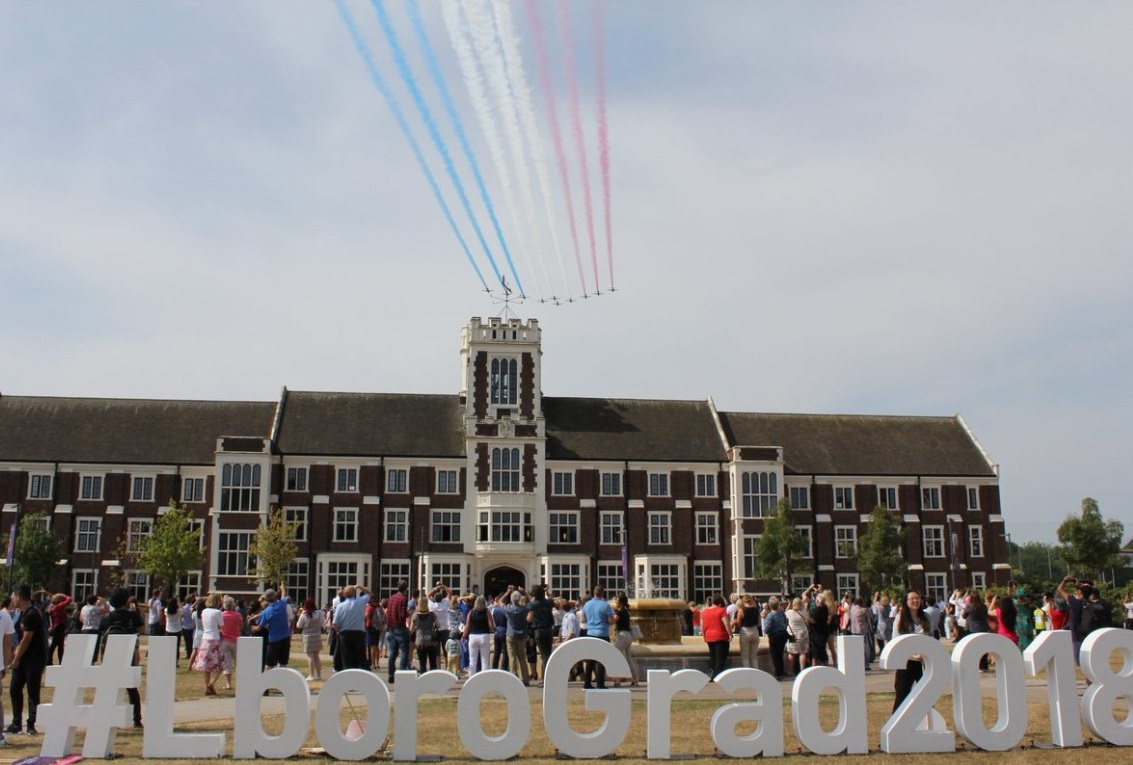 Not many things bring campus life to a complete standstill, but when the Red Arrows pierced the sky this morning, all attention was focused up above - including the School of Science Graduation ceremony which paused for a brief but exciting moment.

The 10 red Hawk aircraft passed over Loughborough University, heading east to west, at precisely 10.40am today, leaving behind their signature red, white and blue vapour trails as well as countless awestruck spectators.

Staff, students, graduands and their parents gathered in crowds at various locations on campus all hoping to get a clear view of the RAF’s revered aerobatic display team and catch a glimpse of the iconic Diamond Nine formation.

The squadron has a close link with the University through two of its pilots, Flt Lt Simon Taylor and Flt Lt Jon Bond, who are both proud Loughborough alumni.

When the aircraft appeared, those who were quick enough with the cameras and phones captured memorable images of the RAF’s finest pilots.

The fly-past was organised by Loughborough University as a special addition to the Graduation celebrations.

Lord Sebastian Coe, the University’s Chancellor, was ready to begin conferring degrees at the morning ceremony, but not before the packed hall turned its attention to the live feed on a giant screen behind the main stage.

Lord Coe said: "What other university gives students a Red Arrows fly-past on their graduation?

"We knew they were on their way, and we sat in the hall waiting, with a live link to outside, and Professor Linton (Provost and Deputy Vice-Chancellor) was explaining that the Arrows would be leaving at 10.28am, from RAF Scampton, and it took 11 minutes for them to get here.

"And, as he was coming to the end of explaining the schedule, there was a low rumble and the Red Arrows flashed by on the screen – with two of our own in the cockpits, of course.

“What a fantastic way for people to remember their graduation.”

@lborouniversity Look to the skies at 1040! Congrats to all the graduates this year. Class of 02’ says hello! #purplenasty

Flt Lt Simon Taylor is in his third year with the team. He is Red 6 and Synchro Lead. With Red 7, the Synchro pair performs the most thrilling manoeuvres of displays.

Simon graduated from the Loughborough Design School in 2002 with a BSC in Ergonomics.

Flt Lt Jon Bond, who flies as Red 2, is in his first year with the team.

Jon graduated from Architecture, Building and Civil Engineering with a BSc in Air Transport Management in 2005.

He went on to complete an MSc in Transport Policy and Business Management the following year.