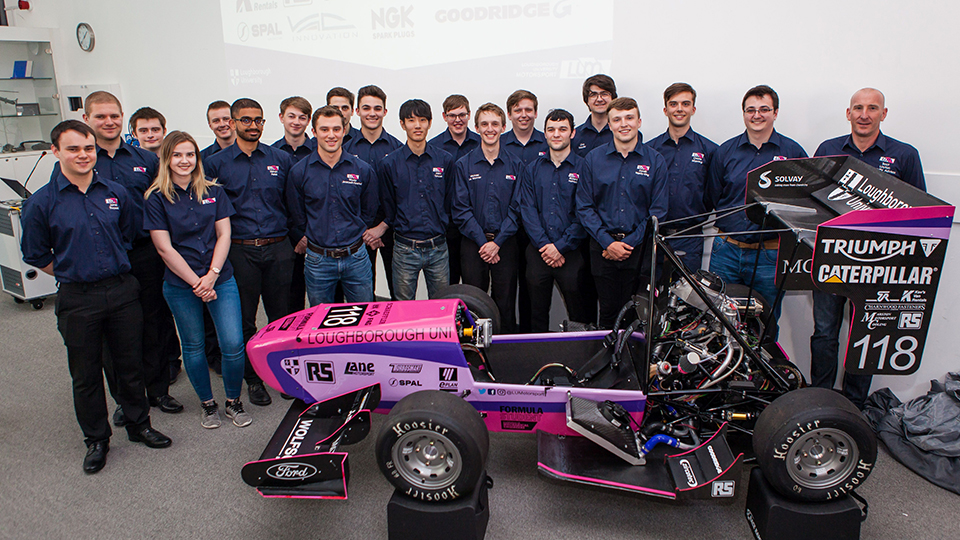 A group of students at Loughborough University have revealed their new Formula Student racing car in preparation for the competition which starts later this month.

The car was unveiled by the team in front of an audience as part of a launch event held in the Desmond Penrose Atrium on Wednesday 4 July.‌

Loughborough Formula Student is an extra-curricular activity comprising a team of over 30 undergraduate students from a variety of subject areas. Students work together throughout the year to create the car, facing many challenges along the way.

The international competition requires teams to design, build and race a single-seated racing car, which goes through rigorous checks.

For example, the car is tested for a number of factors, including its level of safety and the amount of noise it produces to ensure it is legal to drive.

In addition, the team will be assessed by a group of industry experts on their business ideas, the cost and manufacturing of the vehicle, as well as the engineering design.

This year, the team have made a number of developments to the car in comparison to previous years. These include reducing the wheel size and uprights to make the vehicle lighter, changing the cockpit to include a larger, clearer display screen for the driver, as well as an improved aero package to reduce the drag of the car and increase the downforce.

The Loughborough team are supported by a number of organisations, including the Ford Motor Company Fund.

The philanthropic arm of Ford Motor Company has been donating up to £6,000 each year since 2015 to support the team with the project.

Angela Morley, University Research Projects Supervisor at Ford, said: “The Formula Student initiative is a great ‘proving ground’ for anyone wanting to take their passion for engineering and motorsport to the next level, providing an opportunity to gain the key skills required for a variety of engineering roles.

“The assessment element of the competition allows the students to not only elaborate on their direct technical involvement, but also the business and communication skills they’ve learnt through the process.”

"My team have worked incredibly hard this year, and our new car is a credit to their commitment. Now that we've launched the car we can't wait to compete!"

The racing car will be competing in Silverstone from 12-15 July, in Hungary 19-22 and finally in the Czech Republic 1-4 August.

The car will also be displayed at the Royal Automobile Club for one week in October. It joins some of the most iconic vehicles in the world; from winning Formula 1 cars to famous vintage cars.

For more information, visit the Loughborough Formula Student webpages or check out the LU Motorsport website to learn more about the sponsors and team members.