When Dillian Whyte suffered his only career defeat at the hands of Anthony Joshua in 2015 he was training by himself hitting bags in a garage.

After the loss, the Brixton heavyweight, nicknamed The Body Snatcher, reassessed his approach towards the sport and sought the experience of strength and conditioning experts from Loughborough University.

The partnership has proved rather successful, and Whyte’s perfect record of seven wins from his last seven fights includes a stunning KO victory against the undefeated Aussie brawler, Lucas Browne.

On Saturday, the 30-year-old faces Joseph Parker, his eighth – and toughest – opponent (post-Joshua), at the O2 Arena in London.

The winner could be in contention for a world title shot.

WHYTE HOT!!! We've got an action packed night of boxing this Saturday live on Sky Sports Box Office with @DillianWhyte vs @joeboxerparker plus @dellboychisora @KatieTaylor and @boxingbuatsi

More images of Dillian in training at Loughborough

“This fight, I believe I couldn’t have trained any harder,” said Whyte.

“I don’t believe there’s anything possible I could have done – I’ve given it my all.

“I’ve pushed it, I’ve had a lot of light guys sparring and moving and running circles around me.

“I’ve pushed myself beyond my limits.”

Whyte’s previous limits, as he’s told interviewers in the past, include removing bullets from his own leg with pliers to keep his mum from finding out he’d been shot.

Now, he’s his concentrating that same resolve on his training.

"He's willing to push himself and willing to hurt himself," said Al Stewart, Whyte’s strength and conditioning coach. "Stimulate not annihilate is the phrase we use with him when we don't want to break him."

Before Loughborough, Whyte was a one-man show and based all of his pre-fight training on strength and raw power.

He admitted that his overall physical conditioning was below the standard of other professional sportsmen.

“I was fighting at world-class level and I was training by myself,” he said.

“I came here (Loughborough University) and did a screening, and they compared me to other athletes – and I was way, way below.

“They said my legs were too skinny and my arse was too small – those were the first things they worked on, to get bigger legs and bigger glutes.

“That’s where the power comes from, it gives me a bit of balance and a bit of stability and I’m hitting a lot harder.”

The team at Loughborough has focussed on the heavyweight’s power, but not through raw, compound exercise.

Instead, the team has improved his agility, stability and high-intensity conditioning to make him a much more formidable force.

One example of the new dynamics added to the 18st fighter's physical repertoire are the sprint sessions held once a week at the campus’s athletics track.

Coordination, stability and control haven’t completely replaced building raw strength – Whyte recently set a new PB with an 80kg one-arm dumbbell row – but new exercises have been developed to improve fatigue resistance, while maintaining technique, should he ever have to dig deep and grind out a result over 12 rounds, like he did against Derek Chisora, in 2016. 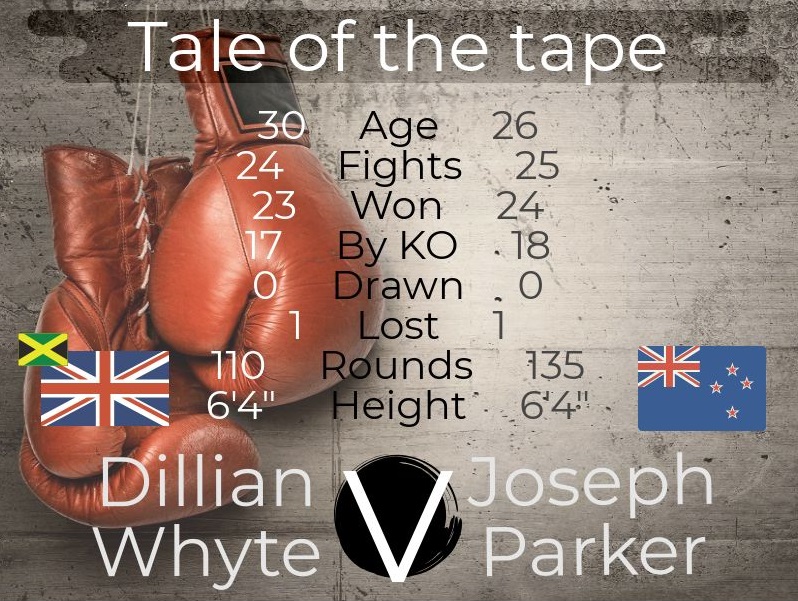 Despite his athletic, mental and physical progression, Whyte knows he has his work cut out when he steps into the ring on Saturday night.

Parker, 26, a former world champion from New Zealand, like Whyte, has only ever lost to Joshua.

But the Londoner still backs himself to notch up his 24th victory.

“Anyone beating me has got to destroy me,” he said. “And I’m not easily destroyed.

“It’s a tough fight, it’s a former world champion who’s been boxing since he was five-years-old.

“But one thing is, he’s never faced anyone like me and there’s a first for everything, and I’ve still got the animal mindset and I’m in better condition and I’m healthier and stronger going in, so we’ll see.

“I’m smarter, more intelligent, not as rage-fuelled as I was when I was younger, so I’m just going to do my job and knock some sense out of this guy.”

If Whyte does best Parker this weekend, some credit will naturally go to his Loughborough coaching team, but there is someone else who has played a positive, and low-key, part in his training regime – his dog, Zeus.

Whyte said: “My other dog died a few months ago, it broke my heart, it was very sad.

“I had to get another puppy – not to replace my other dog – but it’s a distraction when I’m by myself.

“I get to wake up in the morning and take him for a walk – he’s been very helpful, he’s a good dog.

“It’s good to have a bit of company and he wakes me up at 8am every morning with his toy in his mouth going crazy because he wants to go outside.

“Because of him I wake up in time and I eat – I get to the gym ready and I'm focussed instead of just lazing around.”

Whyte versus Parker, with Katie Taylor, Dereck Chisora, Joshua Buatsi and Conor Benn all on the undercard, is live on Sky Sports Box Office, from The O2, Saturday 28 July.