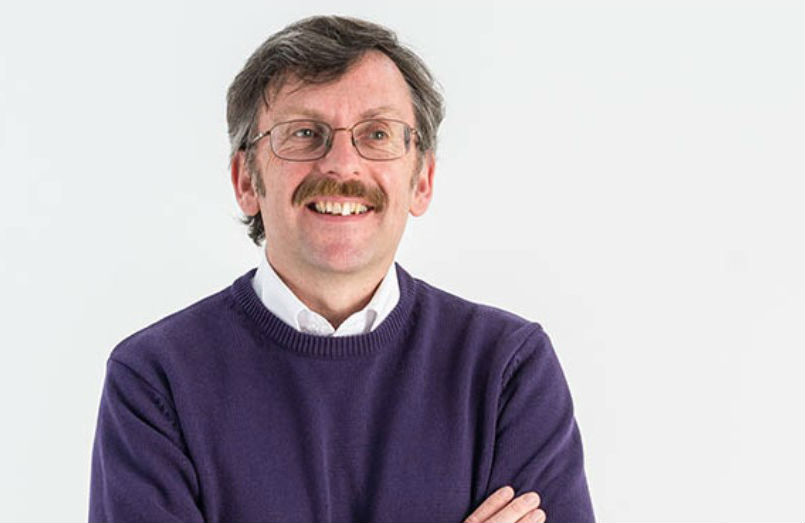 Like a post-election assessment by party leaders the powerful elite of grocery shopping continue to spin a story of growth and prosperity. In truth the market share of the dominant players has been declining for years, writes Dr Seaton.

There is no doubting the claim of the Big-4 (Tesco, Sainsbury’s, ASDA and Morrison’s) that their market share has increased over Christmas 2017 – a Christmas bounce.

But as the bouncing ball graphic below ponders – is this Christmas spirit paid for by their customers likely to continue?

Given that real income is in decline – your actual buying power – does it really seem possible that consumers will continue to spend, spend, spend after the Christmas binge, and are they now fully behind the large format stores? That is, will the market share of the Big-4 rise further? Let’s dig a bit deeper.

“Tesco takes the Christmas crown in festive retail wars. A shock profit warning from Debenhams last week has revived fears that the high street fared badly during Christmas, despite Next and John Lewis reporting strong trading on the previous day.” Daily Telegraph, January 6, 2018

Sainsbury’s has reported its best Christmas trading performance ever, driven by a surge in online sales and a strong performance across ... behind Tesco but ahead of Asda and Morrisons.” The Independent, January 10, 2018

BUT what about Lidl… 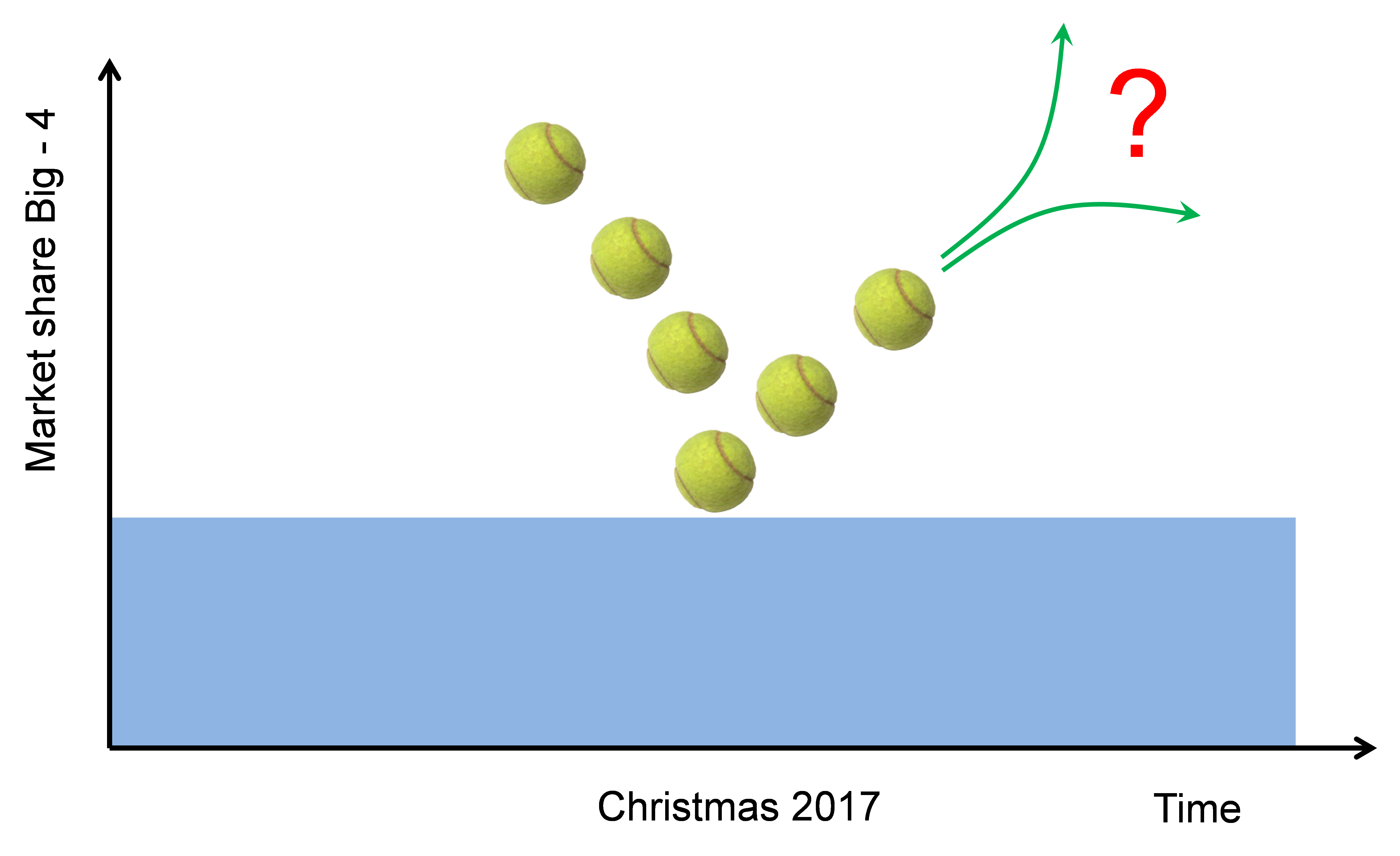 The Big-4 2017 Christmas market share bounce – have they beaten the discounters?

Kantar Worldpanel provide a consistent set of market share data for the major grocery retailers in the UK.

Let’s start by comparing difference in market share between Christmas 2014 with Christmas 2017 in the table, below, to identify any trends. 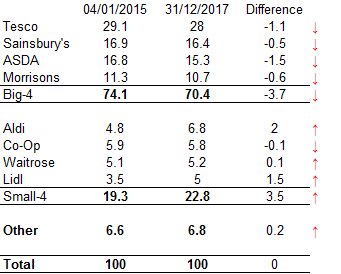 This seems a consistent finding as individually each of the major four retailers – especially ASDA (-1.5) then Tesco (-1.1) - have lost market share over the four-year period. Well over 3 percentage points has been grabbed by the smaller four retailers (Small-4) – but in the main by the heavy discounters Lidl (+1.5) and Aldi (+2).

That said, Tesco is still a massive player with a total of 28% of the grocery retail market – a position it has maintained now for well over 20 years when it took over pole position from Sainsbury’s. Indeed, according to TescoPlc.com key facts the group sales are nearly £50billion employing 460,000 people with 6,890 shops worldwide.

Sainsbury’s has valiantly fought back from 3rd place to secure 2nd highest market share from ASDA.

But how does Christmas competition and pricing work?

Has it anything to do with costs, inflation and how retailers want people to perceive them?

We can perhaps understand the way the players have played during the Christmas period by simply referring to some fun but nevertheless excellent work done by the Good Housekeeping Magazine.

Over four issues 2014-2017 the cost of a shopping basket for an Eight Adult Christmas Dinner a few weeks before Christmas has been assessed – these results are plotted below for our eight retailers. 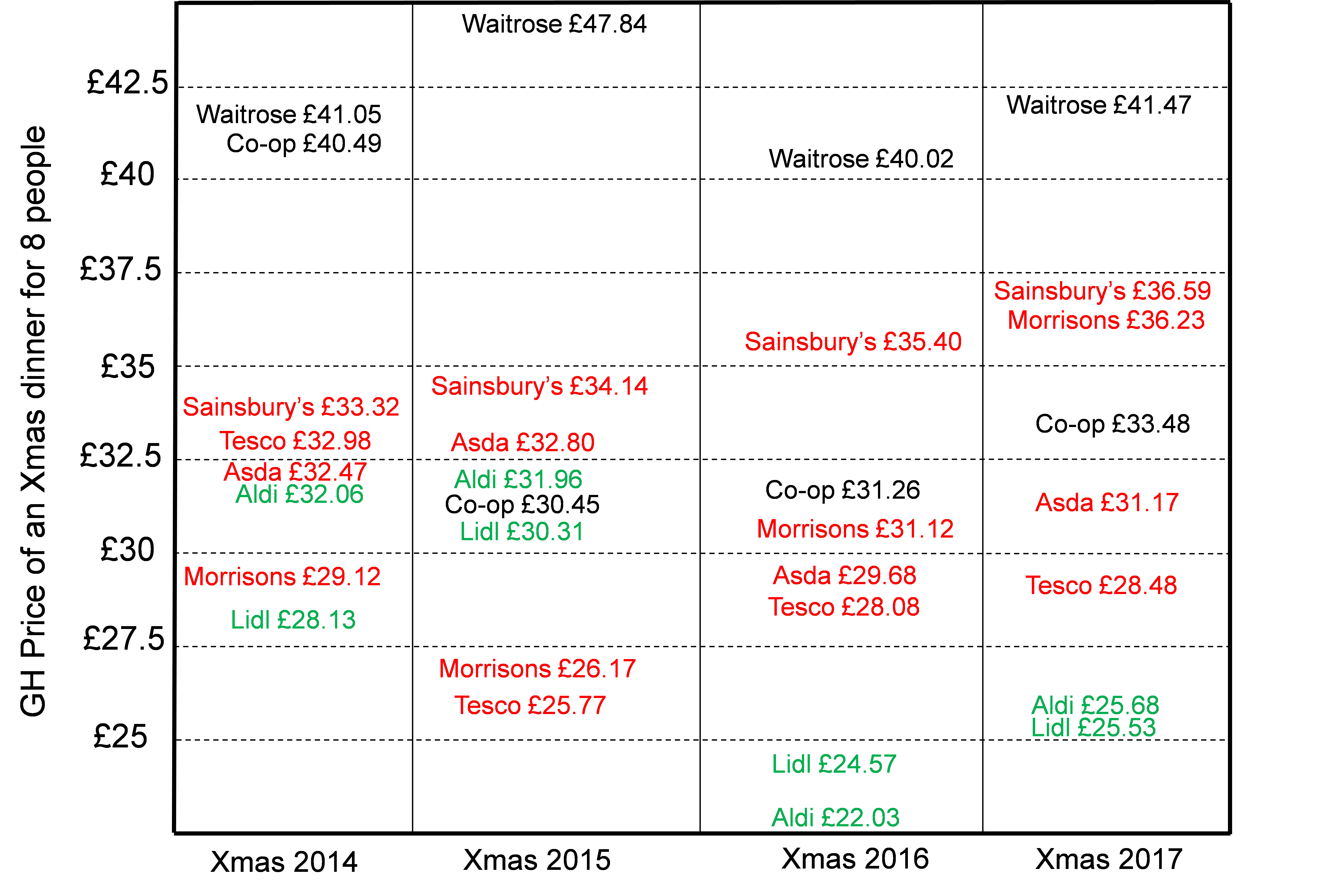 There may be no surprise that Waitrose and Sainsbury’s appear consistently mostly at the top of the cost spectrum whilst Aldi and Lidl mostly though not consistently at the bottom end. The Co-op initially behaves erratically – they had a few problems.

Sainsbury’s is interestingly topping the big-4 in cost whilst Tesco grabs cheapest spot of the four in the three most recent Xmas periods.

But what is concerning is that this year, Xmas 2017, ALL retailers have raised their prices well above inflation – they have not absorbed price increases, but passed them on – even at Christmas.

This shows the seriousness of the continuing Brexit induced inflation, which combined with low or stagnant growth in wages may post-Christmas lead to a subsequent collapse in demand for most goods excepting foods. In periods of cash crises consumers flock to cheap goods – its broadly down to income.

This is why stock market prices go up for grocery retailers and Utilities – they are safe bets in crises.

At its most extreme more may be spent by consumers on food even if prices are rising simply because they need to eat! Given recent reports of the rise in food expenditure at retailers over Christmas and the decline in other sectors then this is particularly concerning amid threatened interest rate rises.

It is well known that interest rate hikes were a mistake going into the previous recession – which was of course initiated by uncomfortable inflation spurt, as people badly put it - Deja vu all over again!

So, does our 2017 bounce capture something special? Is it perhaps a rise in confidence by the consumer prompting a demand surge?

Are consumers returning back to the good old days? What we need to do now is consider the total market share over the four-year time period, this is shown below, again constructed from Kantar Worldpanel date. 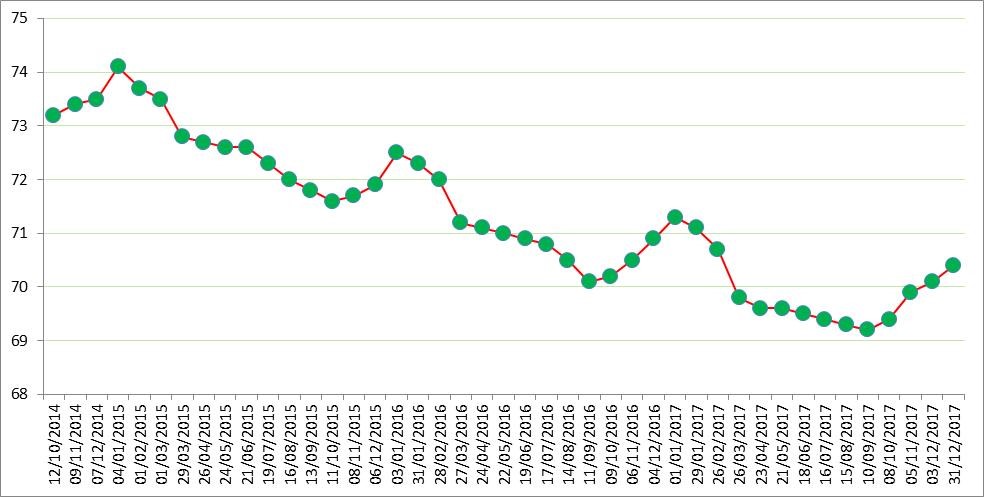 The Big truth about the big-4 total market share (measured on the vertical axis) - four years of data is much more informative. Source: Kantar Worldpanel

A very quick scan of the chart yields the cold hard fact that the market share for the largest retailers in the last four years behaves like a tennis ball bouncing down the stairs, see the last diagram below.

The graph amply demonstrates a periodic feature of the Big-4 market share, there is a bounce for the Big-4 at every Christmas period since 2014!

The bounce is actually a ‘Bad Santa’ for the market dominant few – because it is very likely short lived like the three peaks before it.

The Xmas bounce is a form of department store effect – everything you need is under one roof. It makes sense for consumers to do the big food, big drink, big present and big snack dominated Christmas shop in the biggest supermarket possible– as they have the range/choice that you need, and if the item is missing then a substitute is probably available.

The large retailer format cuts down shopping time and allows you to assess all sorts of possibilities for gifts all in one place.

Not forgetting that during the winter season consumers may swap to a one-stop shopping to avoid the inevitable bad weather, benefit from better parking facilities and on-site petrol stations. 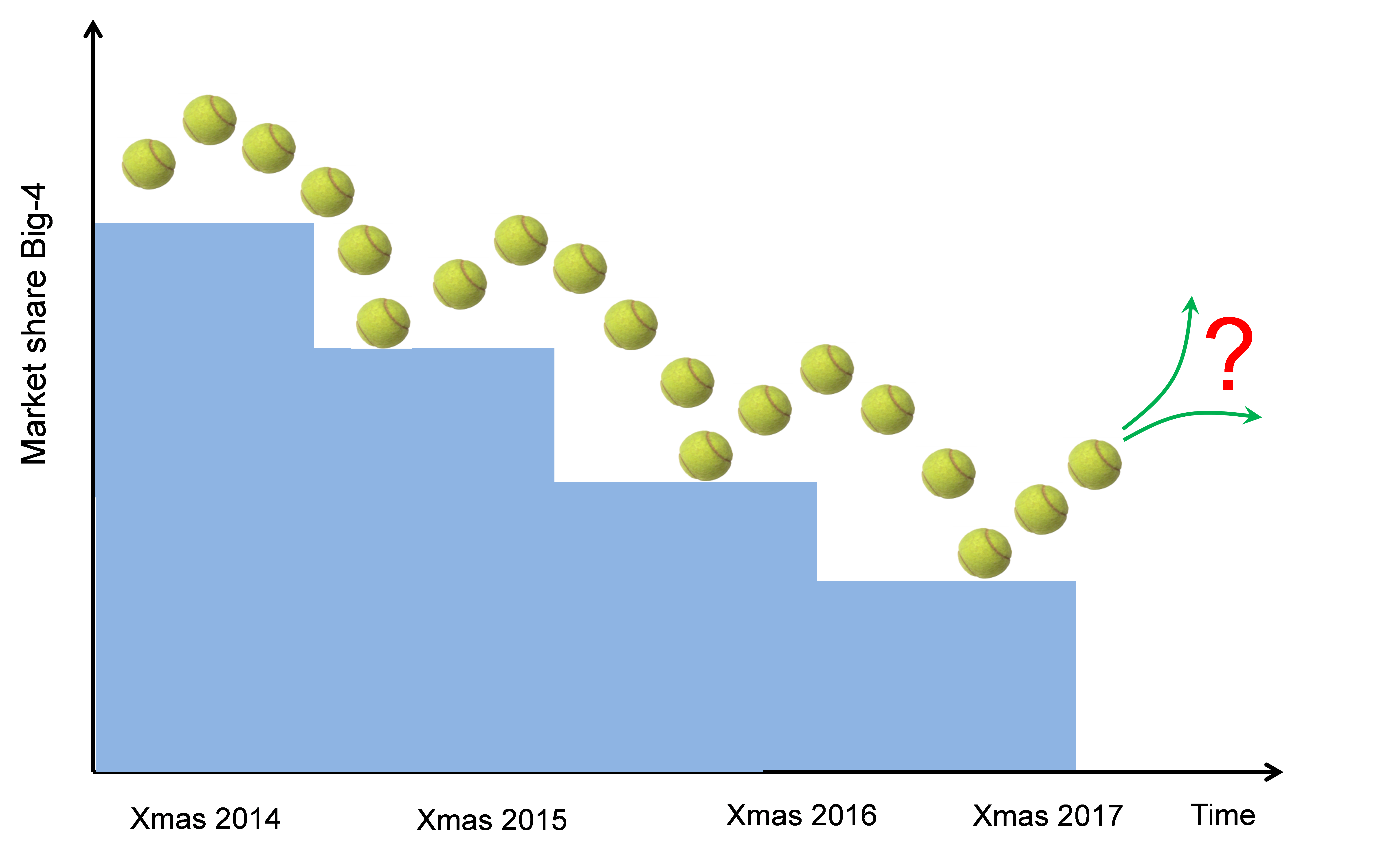 The Christmas bounce? More like a ball bouncing down the stairs!

But for regular week on week or even day to day shopping the heavy discounters are best for basics and the short sharp shopping expedition – less choice in store so less time fussing over what to buy and more time getting on with your busy life.

If the poverty levels in Britain continue to bite especially well beyond the majority median earners, then the bouncing ball of market share will continue to bounce downwards for the Big 4.

The heavy discounters will reap the rewards of the move to poverty and food insecurity from a nation battling decreasing living standards despite the fact that the economy is growing. That is the likely conclusion if prices have been raised by increasing basic costs and the retailers practising surreptitious price rises through shrink-flation (downsizing but maintaining original pack price) – if we’re wrong and last month miraculously saw successful real wage rises due to significant increases in productivity then indeed it will be a happy New Year!