If Loughborough University were a country it would have been tenth in the Gold Coast 2018 Commonwealth Games medal table – ahead of Jamaica and Kenya.

It has been a tremendous Games for Loughborough’s athletes, who together won 30 medals – eight gold, 12 silver and 10 bronze.

More than 85 Loughborough students, alumni and campus-based athletes competed in seven different sports for nine different countries during the course of the Games.

Their combined efforts have given the University a top ten ranking in the Commonwealth Games. 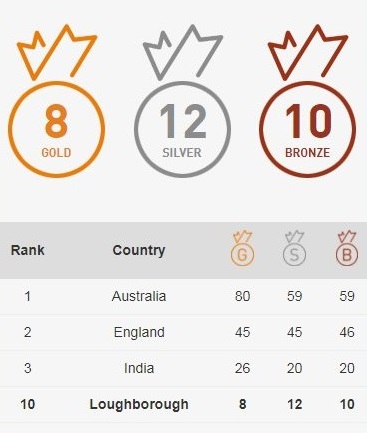 Loughborough Vice Chancellor Professor Robert Allison said: “We are all incredibly proud of every single one of our athletes who competed in the Commonwealth Games.

“Years of commitment, dedication, sacrifice and training go into making an elite athlete, and to even be selected to compete is a huge achievement.

“From the entire Loughborough family, I would like to offer my congratulations.”