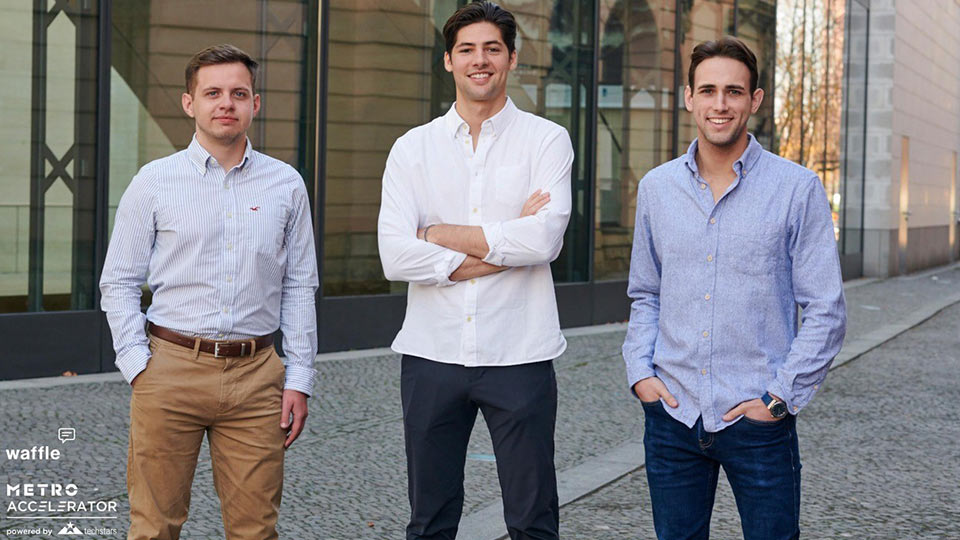 Students Matt Pritchard and James Powell-Tuck have won a sought-after national award for their foody tech idea – and they have even been congratulated by a member of the royal family!

The pair beat 41 other start-up businesses in the Pitch@Palace competition and took home the People’s Choice Award for their dynamic chatbot system Waffle.

Product Design student Matt and James, who studies Computer Science, co-founded Waffle with Julian Bourne, a friend from the University of Sussex.

They were in an empty restaurant one afternoon and came up with the idea after feeling frustrated about the amount of money they were spending eating out.

Waffle looks to save users money by finding the best deals with up to 60% off. It is used within messaging apps and works by communicating with local restaurants that want to fill tables during their quiet hours.

The more a person uses Waffle, the more the chatbot gets to know their taste; it learns their favourite locations and food preferences so they can receive more personalised offers.

Waffle also looks to combat food waste issues experienced in restaurants and it supports young homeless people in Brighton as every time a user takes advantage of the system, a contribution is made towards a meal for someone in need.

As a result of a successful public vote, Waffle was victorious in Pitch@Palace – a competition that allows the best and brightest from across the UK to showcase their ideas in front of an audience of influential individuals, big businesses and investors.

The team discovered they were the winners of the People’s Choice Award last night (Wednesday 25 April) at a gala ceremony at St James’s Palace, London, and were congratulated by the Duke of York – the competition’s founder.

Commenting on the result, Matt Pritchard said: “It’s amazing to have won the People’s Choice Award at Pitch@Palace 2018. We feel appreciative to everyone that supported us and we’re excited for our imminent launch in Brighton.”