A House of Lords Select Committee report on citizenship and civic engagement has based recommendations about young people, discrimination, social anxiety and policy on research by Loughborough University. 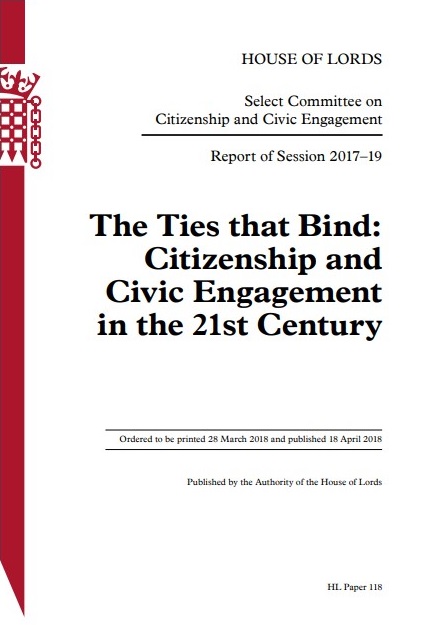 The Parliamentary panel, which included Baroness Ruth Lister, Emeritus Professor of Social Policy at Loughborough, published its report, The Ties that Bind: Citizenship and Civic Engagement in the 21st Century, last week.

Among the 79 recommendations in the 170-page document, which included urging the Government to stop using the term Fundamental British Values and instead use Shared Values of British Citizenship, were several specific proposals based on Loughborough’s social and cultural expertise.

“We have found much that is encouraging, showing British society engaged harmoniously together despite the waves of change that are inexorably rolling over us.

“But inevitably there are areas where we are less successful. We have tried to identify the barriers which are preventing people from feeling part of our society or contributing to it, together with the steps which must be taken to remove those barriers.” - from the report

Dr Sarah Mills, a Reader in Human Geography, has spent three years exploring the Government’s motivations behind, the voluntary sector’s engagement with, and young people’s experiences of, the National Citizen Service (NCS).

She was invited to submit oral and written evidence to the committee.

The Lords’ report cited her ESRC research with Dr Catherine Waite in the following recommendations:

“I’m pleased that the Select Committee report drew on a range of project findings to inform their recommendations about NCS.

“Young people in our research were overwhelmingly positive about their NCS experience, with clear benefits to their participation, and yet much more can be done to improve the programme by ensuring projects are youth-led and tackling the hidden costs of social action for low-income groups.

“The Select Committee report recognises the success of NCS in attracting disadvantaged young people, but this research from Loughborough University highlights some of the hidden costs of social action projects and challenges in rural communities.

“I’m delighted the Lords report has recommended tackling these, as well as encouraging greater efforts to ensure youth-led projects.”

Dr Line Nyhagen, Reader in Sociology at Loughborough, also gave spoken and written evidence which discussed the potential discrimination against women of all ethnic groups and religions, as well as specific discrimination experienced by Muslim women.

Her work explores religious beliefs and practices acting as barriers within Muslim and Christian communities and beyond, and how being a “good Muslim” or a “good Christian” equates with being a good citizen.

She highlighted how advocates of Muslim women’s rights and Islamic feminism are becoming increasingly vocal and deserve to be heard by the UK government, by Muslim community organisations, and by secular women’s organisations.

Dr Nyhagen was also quoted in the report, saying: “We tend sometimes to speak about gender inequality as if it no longer exists in the majority society but continues to exist only in minority communities. I would emphasise that gender inequalities and discrimination against women are endemic to society, relating to politics, education, work, civil society and intimate life.”

The select committee explored the social anxiety experienced by the “ethnic majority” - communities who feel they are losing their privileged status within the nation.

Dr Michael Skey, Lecturer in Communications and Media, submitted written evidence to the Lords – although his research was not cited in the final report.

His work examined questions of nationality and belonging and included numerous examples of communities refusing to acknowledge the claims of minorities to belong to this country.

He said: “What my research has shown is that many members of the ethnic majority are feeling increasingly anxious and insecure about some of the wider socio-economic transformations they are witnessing and, as a result, believe that their own privileged status within the nation is being undermined.

“In other words, they feel that they are losing out.

“Now, we might not like some of the ways in which such anxieties are expressed but simply dismissing them as backward or uncivilized or racist, doesn’t enable us to engage people or offer more effective means for building bridges between different groups.”

Also included in the submitted material was research by Dr Marco Antonsich, Senior Lecturer in Geography.

He said: “My argument is that policies targeting citizenship alone will not succeed in generating a cohesive society unless citizenship is also sustained by a vigorous and open debate about ‘who we are’ and ‘who we want to be’ as a nation.

“In Britain, this might be even more difficult than in other countries, given the co-existence of multiple nations.

“The risk, as feared by many, is that this debate might lead to further divisions, as people increasingly start identifying themselves in terms of distinct nations.

“Yet, one should not forget that the existence of distinct nations is not necessarily conducive to national separatisms.”