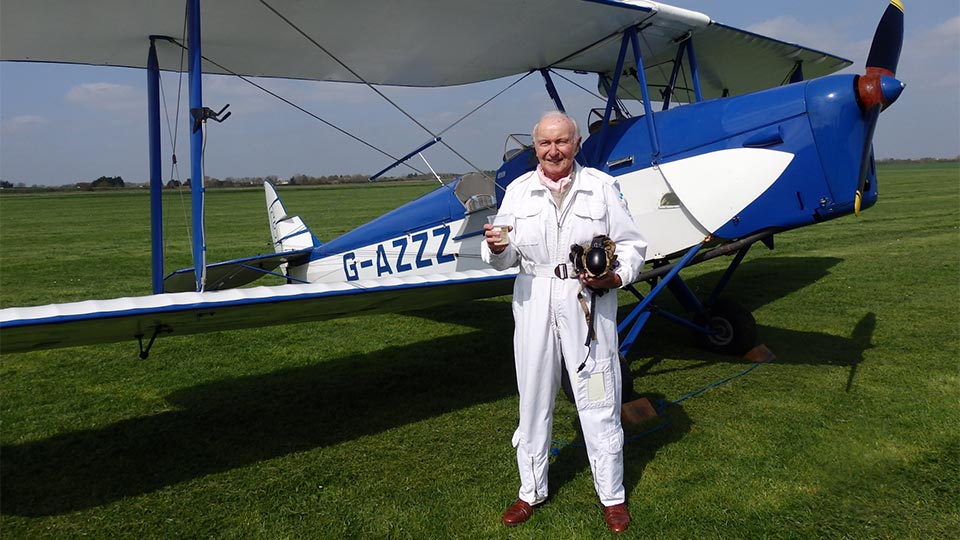 Ex-RAF test pilot Captain Desmond Penrose marked the 70th anniversary of his first solo flight at the weekend by getting behind the controls of a 1930s biplane.

The 87-year-old alumnus took to the sky on Saturday (14 April) in a DH82a Tiger Moth at RAF Henlow in Bedfordshire for a 15-minute flight and trip down memory lane.

Capt Penrose, who has an atrium named after him at the University, completed his first solo flight in 1948, on the same date and in the same make of plane, at the age of 17.

He said: “It meant a lot to me and the flight was glorious. All week the weather had been atrocious with low clouds and poor visibility, but on the day it was just a joy.

“I flew up north about five minutes to the Shuttleworth Collection [an aeronautical museum in Bedfordshire] where I was a display pilot for 42 years, then returned to Henlow.

“I also did a low fly-past”, he laughed, “Which I would definitely not have been allowed to do on my first solo!”

After landing, Capt Penrose and friends toasted seven decades of flying with a glass of champagne.

Capt Penrose first learned to fly in the University Air Squadrons and moved seamlessly into the ranks of the RAF after graduating in Aeronautical Engineering in 1951.

Capt Penrose has flown more than 300 aircraft during his seven decades in the air and he holds British and American pilot licenses.

The octogenarian, who will be celebrating his 88th birthday in May, continues to fly regularly during the year and is not planning on hanging up his helmet any time soon.

He said: “There will be a time when I will have to stop - but not just yet!”

Last year, Capt Penrose made a generous donation to the University for the furtherance of women in engineering.

This summer, the Penrose Engineering Residential – a free two-day residential event that looks to raise Year 11 female students’ interest and knowledge of engineering subjects – will take place on campus.

When asked what his future plans are, Capt Penrose said: “As long as I’m fit enough and people are kind enough to lend me an aircraft, I will fly!”