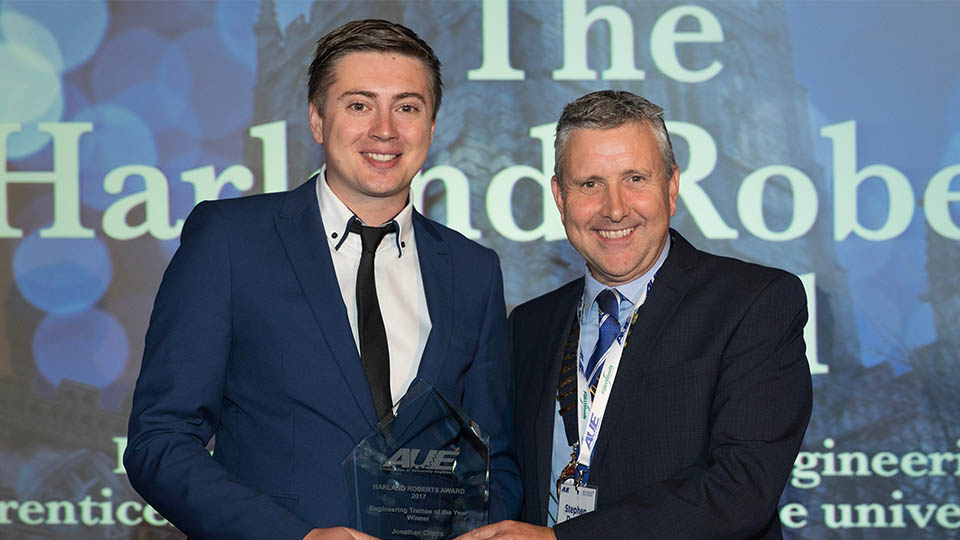 Jonathan Cripps, Mechanical Technician at Loughborough University, has been named the Harland Roberts Engineer Improver of the Year 2017.

The award is given to the best improver, apprentice or trainee on the basis of their occupational progress, practical and theoretical ability, positive approach to employment and outstanding personal qualities.

It was presented at the Association of University Engineers (AUE) conference in Nottingham earlier this month.

Jonathan joined the University in 2005 as an apprentice plumber. He achieved his Higher National Certificate in Mechanical Engineering in 2016 and is set to complete a Higher National Diploma in early 2018.

During his apprenticeship, he quickly learned the key systems, compliance requirements and legislation as well as developing his managerial skills. In January 2017, he secured his current post as Mechanical Technician.

Speaking about his journey, Jonathan said: “Whilst studying through my apprenticeship, I realised that I could achieve so much more and advance myself further.

“I have always expected this path to be difficult. Juggling work, studying and family life isn’t easy, but I wouldn’t change it. Doing this made me who I am today and I'm proud of what I have achieved so far.

“The mentors I have had over the years at Loughborough University have been great. I’ve learned so much from them and they have always helped me if needed.”

David Howell, Director of Facilities Services at Loughborough said: “Jonathan has worked exceptionally hard since joining the University. He has a thirst for knowledge and continually strives to improve his performance and seek engineering excellence.

“He is a great asset to the team. My colleagues and I would like to congratulate him on this thoroughly deserved award.”