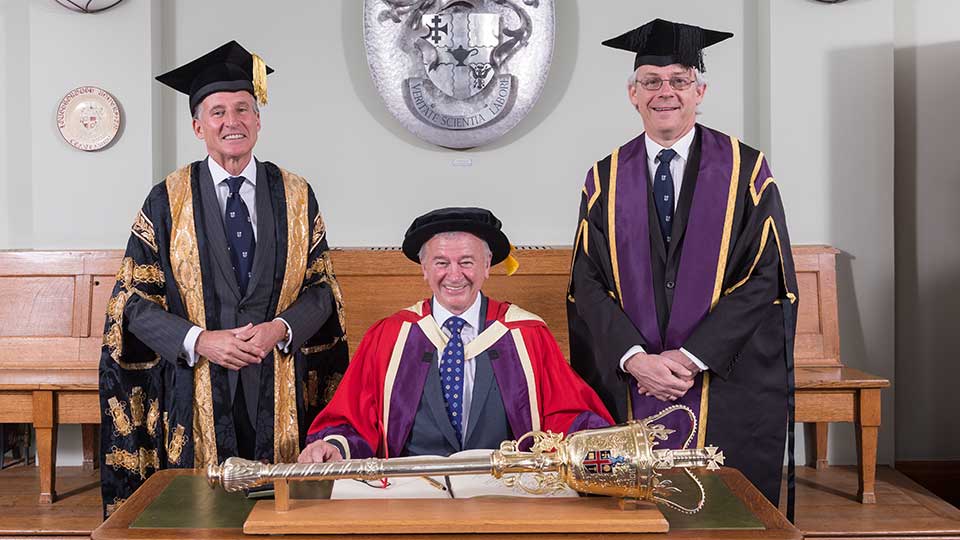 Sir Terry Morgan, Chairman of Crossrail, has been awarded an Honorary Doctorate of Technology (DTech).

The award – an Honorary Doctorate of Technology (DTech) – was presented at the University’s degree ceremony today (21st July), in recognition of Sir Terry’s outstanding contribution to UK transport infrastructure and his advocacy of vocational training and apprenticeship programmes.

In 2002 Sir Terry moved to the rail industry, becoming Chief Executive Officer for Tube Lines, the public-private partnership company responsible for the maintenance, renewal and upgrade of the infrastructure of three London Underground lines.

In 2009 he took on his current role as Chairman of Crossrail, which is responsible for developing the new metro railway that will run through central London. It is the biggest addition to the South East transport network in the last 50 years and Europe's largest construction project.

Throughout his career Sir Terry has believed that engineers’ contribution to society deserves proper recognition and has used his position to change perceptions of vocational skills and highlight the importance to business of apprenticeship programmes.

Over the years he has overseen the recruitment of 700 apprentices to date at Crossrail as part of a wider programme supported by the Skills Academy in East London. As the former Chair of the National Skills Academy for Railway Engineering and the Manufacturing Technology Centre and the current Chair of the High Speed Rail College, Sir Terry has also overseen the development of skills centres of excellence for each of these programmes.

At the ceremony, Sir Terry said to the students graduating from Loughborough: “The world has huge opportunities right now. There is not a better time to be involved in engineering and to be able to learn and develop the skills that you’ve been learning at this University.

“If you have the right behaviours, the right skills, if you develop the right leadership qualities you can achieve things you never thought possible.”