Loughborough shortlisted for University of the Year higher education ‘Oscar’

Loughborough University has been shortlisted for four Times Higher Education (THE) Awards, including the prestigious ‘University of the Year’ award. 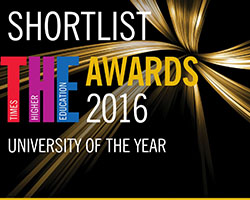 In addition to its University of the Year nomination, Loughborough has been shortlisted in the Outstanding Digital Innovation in Teaching or Research category, for the International Collaboration of the Year Award, and for the Data Points Merit Award.

Professor Robert Allison, Loughborough’s Vice Chancellor and President, said the University was delighted to have been recognised in four categories and particularly honoured to be among the very select group being considered for the esteemed ‘University of the Year’ award.

“The award recognises exceptional performance in the past academic year and Loughborough has enjoyed another outstanding twelve months,” Professor Allison said.

“We rose to 4th in the Guardian University Guide and 7th in the Complete University Guide. We topped the annual Times Higher Education Student Experience Survey, and our Students’ Union was rated the best in the country for the third consecutive year in the Whatuni Student Choice Awards 2016.

“I believe our achievements reflect the collaborative approach we take. We shape our courses and placement opportunities in partnership with business and industry, which enables our students to develop the skills employers seek. And we work closely with our Students’ Union to actively engage our students in their learning and skills development. Essentially we put our students at the heart of everything we do.”

The Outstanding Digital Innovation in Teaching or Research award celebrates the impact that new digital approaches have on innovation in research or the student experience. Loughborough has been shortlisted in this category in recognition of its innovative remote photovoltaic lab that enables students around the world to access state-of-the-art equipment in order to enhance their knowledge of solar technologies.

The International Collaboration of the Year category recognises exceptional projects carried out jointly between a UK institution and one or more international partners. Loughborough has been shortlisted for a project that brings together universities and non-governmental organisations to raise awareness of the issues relating to sustainable human development.

The shortlist for this Data Points Merit Award is compiled by the Times Higher Education magazine, based on data from the most recent Research Excellence Framework, the ‘mock’ Teaching Excellence Framework undertaken earlier this year by the THE, and the magazine’s World University Rankings.

The Times Higher Education awards ceremony will be held on 24th November 2016 at the Grosvenor House Hotel, Park Lane, London, with more than 1,000 guests expected to attend, including politicians, senior figures within the higher education sector and university staff from around the UK.