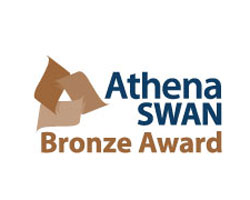 Loughborough University’s institutional Bronze award, which it has held since 2009, was renewed as part of the 2014 awards round. Loughborough Design School also received its first departmental award – a Bronze – under the prestigious scheme.

Launched in 2005, and run by the Equality Challenge Unit (ECU), Athena SWAN helps universities and research institutions to create more equitable working environments for women in STEMM and rewards institutions that are making positive steps. Loughborough was one of the founding members of the Athena SWAN Charter.

“I am delighted that the hard work and commitment of staff at the University and Design School have been recognised in this latest awards round.

“Female academics in STEMM subjects are in the minority and the phenomenon of the ‘leaky pipeline’ means that underrepresentation of women is even greater in higher ranking positions. This loss of female talent is bad for women, bad for the progression of STEMM, bad for higher education, and bad for the economy and society.

“Athena SWAN is an important initiative in the drive to redress the imbalance.”

In May 2014, a team of researchers from Loughborough University’s School of Sport, Exercise and Health Sciences was commissioned by the ECU to undertake an independent assessment of the impact and benefit of the Athena SWAN charter on participating higher education institutions and the wider sector.

They found that the Athena SWAN Charter does advance gender equality and change the working culture and attitudes within participating departments and universities. Their full evaluation is available to download – Advancing women’s careers in science, technology engineering, maths and medicine: evaluating the effectiveness and impact of the Athena SWAN Charter

The 2014 awards will be presented at a ceremony at Robinson College, University of Cambridge, on 6 November.