People aged between 20 and 29 have been hit the worst by a resurgence in COVID-19 but there is a second wave expected for older people soon.

The prediction has been made by Loughborough University’s Dr Duncan Robertson – an expert in dynamic modelling.

A new heatmap below, using data from Public Health England (PHE) and the Office for National Statistics, shows how cases have evolved week-by-week between June 29 and September 6.

During the highest infection period of the same group March 30 to April 5, the over-80 demographic experienced 232 cases per 100,000. 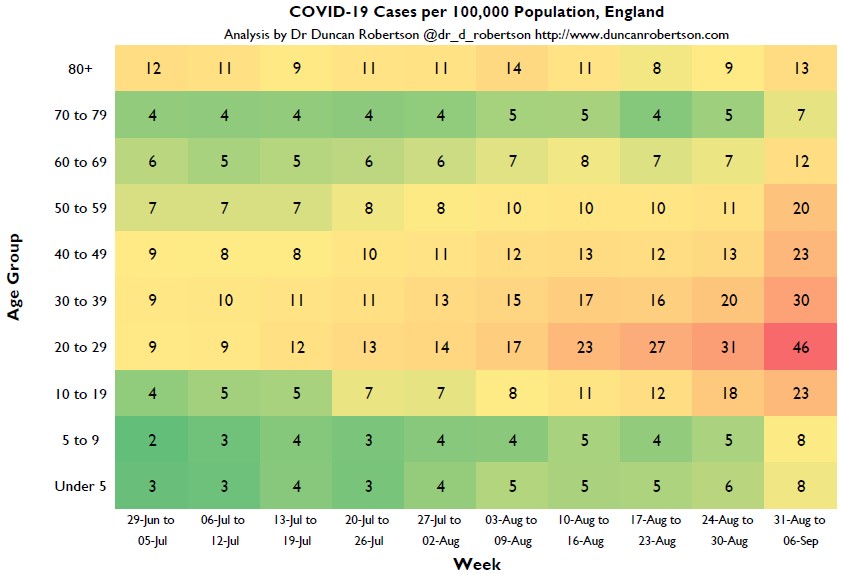 However, Dr Robertson, of Loughborough Business School (SBE), said he expects the cases for older people to rise again.

He said: “We can clearly see that cases have been rising through the population for the last few weeks.

“From large numbers of cases concentrated in young people, we can see more of the working age population being infected with COVID.

“Looking at the disease dynamics in the US, France, and Spain, I anticipate that we will see more cases in older people in the weeks ahead.  And older people have greater risk of dying.

“These heatmaps are produced by working out the number of people in each week who have been tested positive for COVID-19 as a proportion of the population in each age group.

“Higher numbers mean a higher proportion of that age group have been tested positive – the numbers represent the number of positive COVID-19 cases per 100,000 population.”

The UK’s coronavirus testing programme has been described as being “in chaos” with people being told there are no testing centres available to them, and samples having to be sent abroad for processing.

Dr Robertson said that if the Government hopes to bring any sense of normality back to employment, education and hospitality it needs a better testing strategy.

He said: “Over the last few weeks, we have seen that testing capacity has been outstripped by testing demand.

“This has not just been due to the schools going back – demand for Pillar 2 (commercial) testing exceeded capacity on August 23, over three weeks ago.

“In order to implement a ‘whack a mole’ strategy, we need to know where to whack the moles.

“Disincentivising or ‘throttling’ testing capacity in areas with relatively low numbers of known cases means that we are at very high risk of not being able to identify new clusters and outbreaks.

“In order to be able to return to school, university, restaurants, pubs, and working from the office, we need to ensure that people who have COVID symptoms are able to be tested, and their results returned quickly.

“By disincentivising people by throttling demand for COVID tests, individuals who have COVID symptoms are less likely to be tested.

“For some, this will mean breaking their isolation before they should.

“More importantly, if these individuals are COVID positive, their contacts will not have been traced, and therefore we risk an outbreak spreading out of control.

“There are signs that cases are spiralling out of control.  I wrote in March that ‘muddling through’ does not work for pandemics.

“That comment is as appropriate now as it was then.”