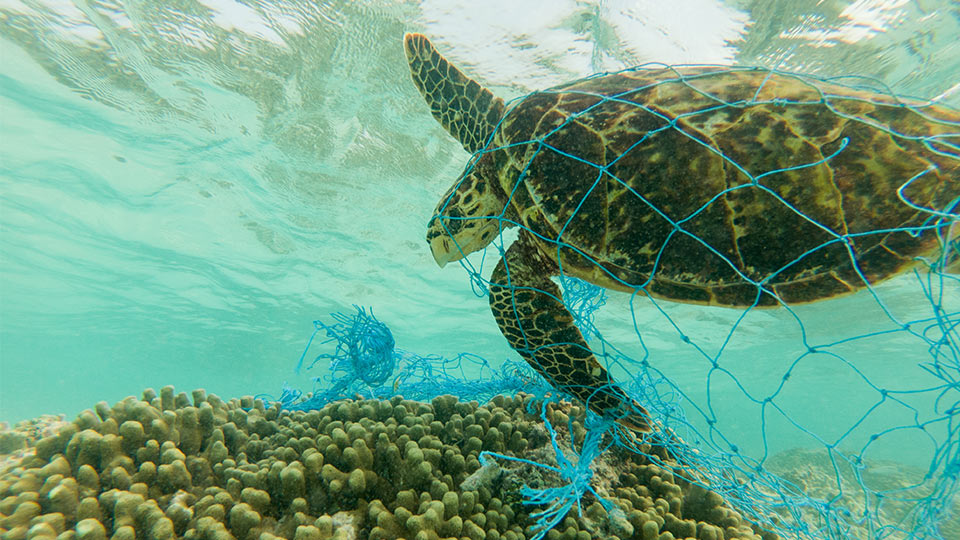 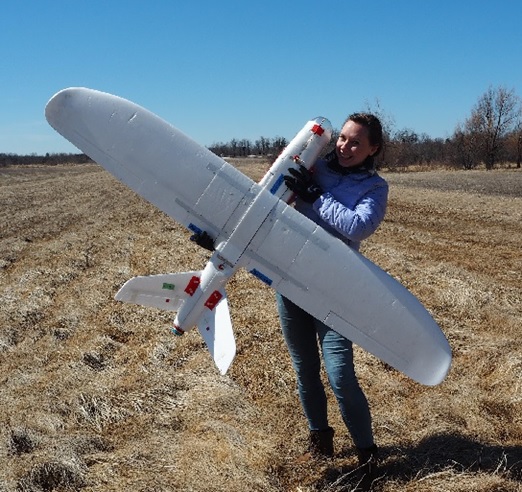 Below, the PhD student co-affiliated with the Zoological Society of London tells VOLUME her plans to develop technology that can help combat illegal fishing, lead to a better understanding of megafauna movement and detect ghost nets – the ocean’s ‘silent killers’... ‌

“Sometimes when I’m out at sea and I see the devastation caused by humans, I have to stop myself from just sitting down and crying.

“But it’s what drives me to do what I do and to develop technology that can lead to real changes in conservation.”

Within the first five minutes of meeting Melissa Schiele at a small cafe on the Loughborough University campus, two things became perfectly apparent.

One, she has a fierce passion for protecting marine life and two, she’s not joined the University’s School of Mechanical, Electrical and Manufacturing Engineering to mess around.

More specifically, she wants to develop a waterproof, water-landing drone (or an ‘unoccupied aerial vehicle’ (UAV)) that can read registration plates on small illegal fishing vessels and spot discarded fishing nets in the ocean whilst flying at altitudes of around 80m – which is not far off the height of the Statue of Liberty.

Melissa, originally from Chiswick, London, is a commercial drone pilot and for the past two years she has travelled the world surveying wildlife with ZSL (Zoological Society of London)’s Institute of Zoology (IOZ), having joined there as a Postgraduate Researcher.

She flies fixed wing UAVs – drones with a rigid structure that generate lift under the wing using forward airspeed – and uses them for a variety of applications, including detecting marine megafauna such as turtles, sharks and rays.

Melissa works closely with Dr Tom Letessier, a Marine Biologist and conservationist at ZSL’s IOZ, who had the initial idea to explore using UAVs to help marine ecology. 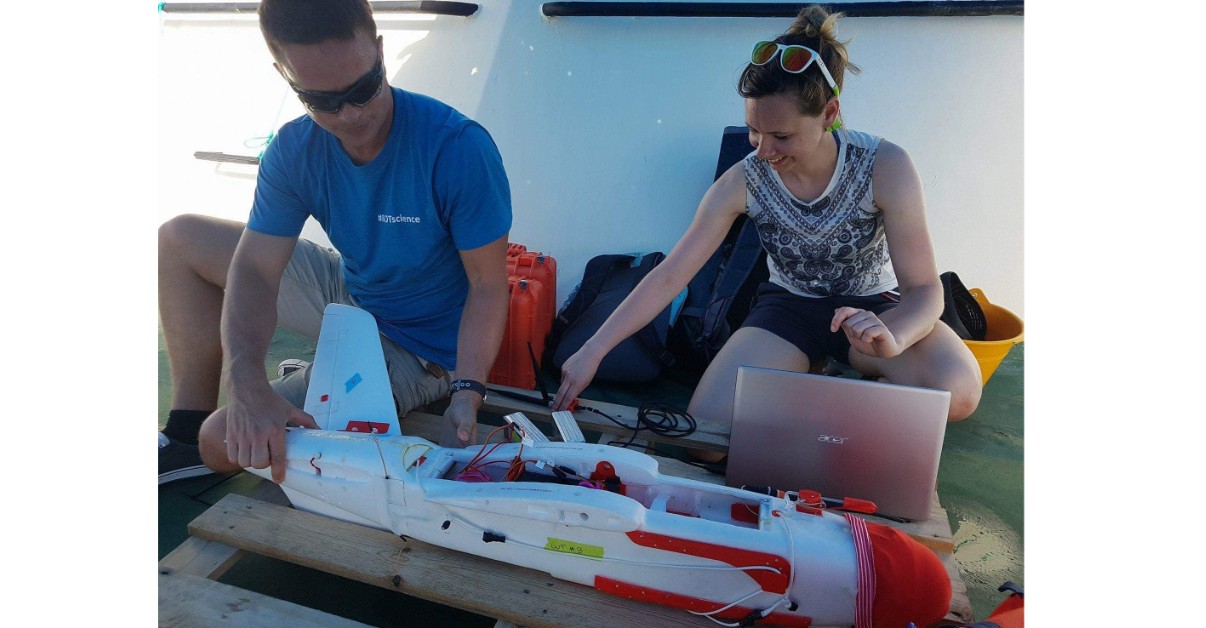 The pair have focussed their efforts on using drone technology to help protect the British Indian Ocean Territories (BIOT) – a tropical archipelago in the Indian Ocean that lies just south of the Maldives.

BIOT is of massive scientific interest due to its abundance of wildlife, which includes coral reefs, tropical birds, fish and sharks and in 2010 it was declared a marine protected area, meaning no commercial fishing is allowed.

However, small and medium-sized illegal fishing vessels fish around the islands often undetected and target large pelagic fish species, such as tuna, and also shark for the fin trade.

According to the Chagos Conservation Trust, Indian Ocean shark numbers have decreased 90% over the last three decades and illegal fishing continues to threaten them and other marine life.

A patrol vessel has been assigned to BIOT but policing more than half a million kilometres of ocean is no easy task and it is often hard to detect small illegal boats.

UAVs seemed like part of a logical solution to this issue, but Melissa and Dr Letessier found current technology limited what they could achieve out at sea.

For example, traditional fixed-wing UAVs are not made for landing in water and multi-rotor UAVs are not an option as their range of operation is limited.

Adamant that drones have a place in marine conservation, Melissa and Dr Letessier sought to overcome these challenges and in 2018 they developed a new low-cost, fixed-wing, waterproofed and water-landing drone specifically for multi-use marine surveillance, thanks to funding from the Bertarelli Programme in Marine Science – hosted by ZSL and the help of Canadian drone company, Aeromao.

The UAV has live stream capabilities, can fly within a 10km range and is able to detect fishing small fishing vessels from 75-110m high.

However, there is still room for improvement – for example, the current camera system can’t read the registration numbers on the vessels from high altitudes and the range the drone can fly within needs to be extended.

Melissa has made the decision to return to higher education and join Loughborough University as she wants to “push the boundaries of what is possible in terms of UAV engineering in the field of conservation technology” and take the system to the next stage.

She is hoping with the support from Loughborough’s engineering experts she can develop two systems.

The first being a waterproofed, water-landing fixed-wing UAV with a range of 25km, which is specifically sensor-laden for gathering usable data that can be used in court during prosecutions of illegal fisheries.

The second is a low-cost system that can be used by marine-protected area managers, local rangers or fisheries enforcement teams to monitor their waters easily for wildlife and fisherfolk. 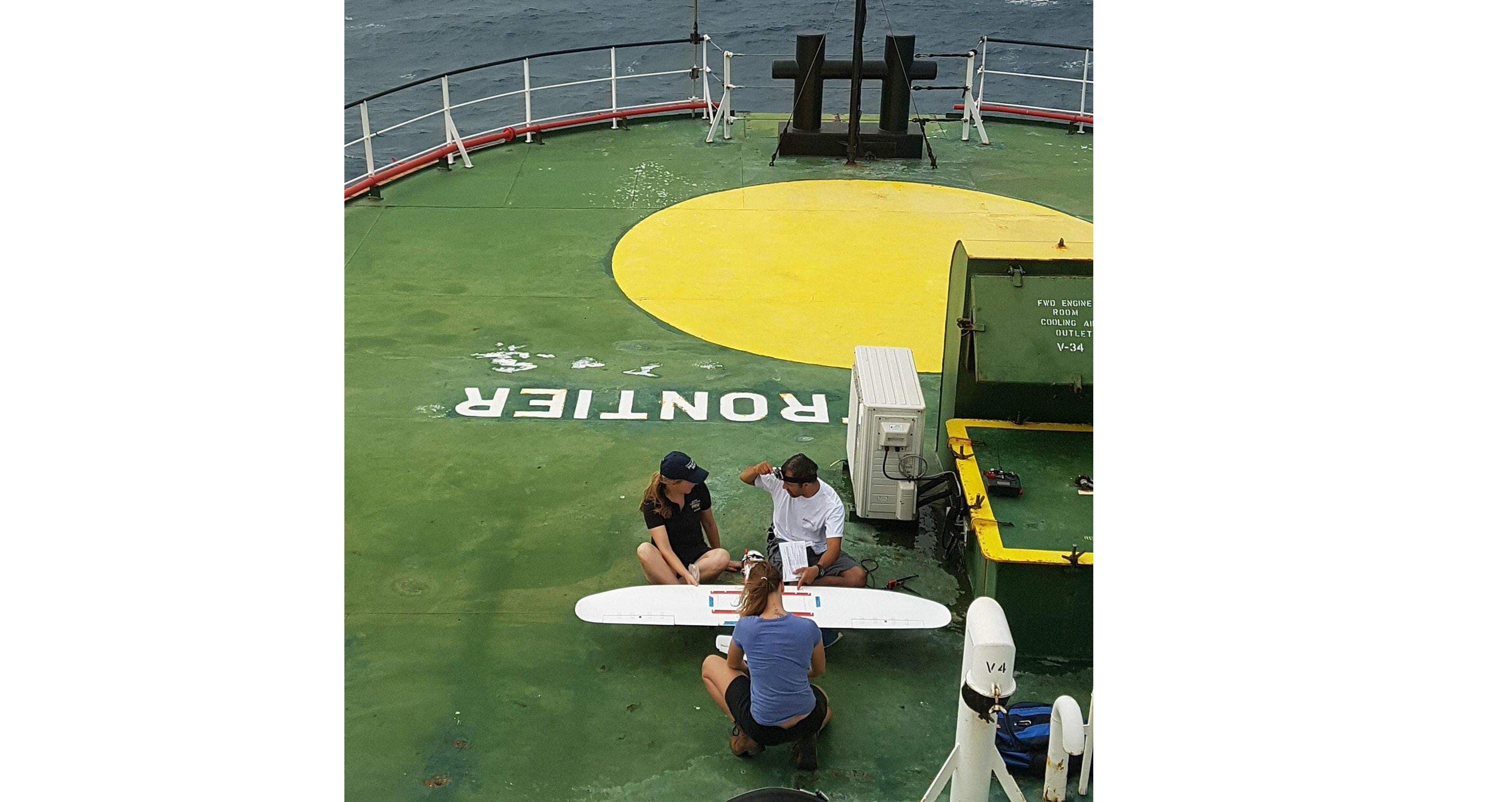 Melissa and the team working on a drone onboard a patrol boat.

Melissa, ZSL and the Loughborough team will extensively field test the kit and test its capabilities in three areas that underpin Melissa’s PhD:

The second objective is important as little is known about the movements of sharks and other marine life around BIOT islands, with or without invasive rats on them, and this data would be of great use to conservationists and ecologists.

As well as focusing on BIOT marine life, Melissa will also look at using the tech to detect pilot whales, sharks and turtles in the Bahamas.

Detecting ghost nets is also of great importance to conservationists as sharks, turtles and other marine life are naturally drawn to the discarded fishing nets, where they get entangled and are unable to free themselves.

Entanglement can lead to exhaustion, suffocation, starvation, amputations of limbs, and, eventually, the death of a marine animal. 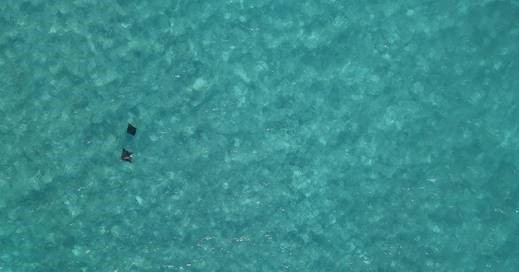 Rays captured on camera by Melissa.

Melissa’s PhD sets a milestone for Loughborough University as it is the first time ZSL has collaborated with the institute as a research partner.*

Of its importance and joining the Engineering department, Melissa said: “Most of the PhD students at ZSL are nestled in ecology or biology departments.

“I think I may be the first that is based in a mechanical engineering department and who is integrating UAV engineering into conservation, by actually designing, testing and improving.

“I hope to build capacity in situ and see the UAVs being used successfully in surveillance and conservation strategies.”

She continued: “I came to Loughborough because I needed the support of experienced and innovative multidisciplinary engineers who are comfortable at the interface of engineering and ecology and I’ve certainly found this here.

“My supervisors are incredibly well connected with big players in the UK ‘marine scene’ and I am excited for the future collaborations that await us.

“I also hope more multidisciplinary PhDs follow in my wake!”

Further information on Melissa’s research can be found on her blog, The Intrepid Ecologist, here.

* Looking atthe University’s research award records, which go back to 1999, this would be the first time Loughborough has collaborated with the Zoological Society of London.