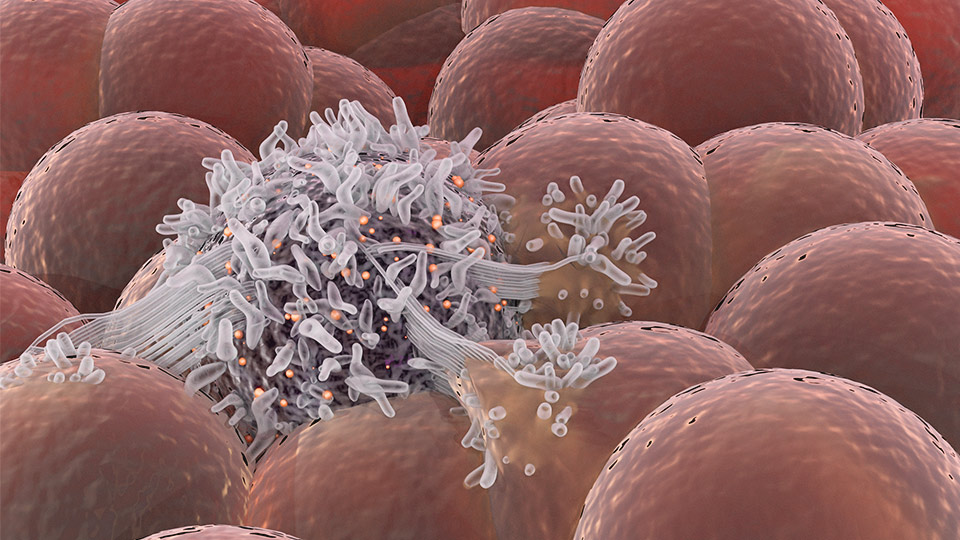 A Loughborough University PhD student has provided new insight into how breast cancer cells interact with cells in our body by using a novel 3D model.

Biochemist Mj Brown, of the School of Sport, Exercise and Health Sciences, has investigated how human mesenchymal stem cells (hMSCs) and breast cancer cells interact and affect each other’s invasiveness – a concept that has previously left scientists puzzled.

hMSCs are found in bone marrow and are important for regenerating and repairing damaged areas in the body as they can differentiate into a variety of cell types, including those that make bone, cartilage, muscle and fat.

Cancer researchers have turned their focus to hMSCs as they naturally travel to tumours when they appear in the body and interact with cancer cells.

They are particularly keen to understand if hMSCs can interact with cells to prevent ‘secondary breast cancer’ as this type of cancer is incurable.

Secondary breast cancer occurs when cancer cells from a primary tumour in the breast spread to nearby tissues such as the lungs, bones and liver via the blood or lymphatic system – a process known as ‘metastasis’.

Though hMSCs are naturally drawn to these ‘invasive’ cancer cells, how the cells interact and affect each other is unclear and previous research projects are divided in their results, with some finding hMSCs promote metastasis and others concluding they reduce it. 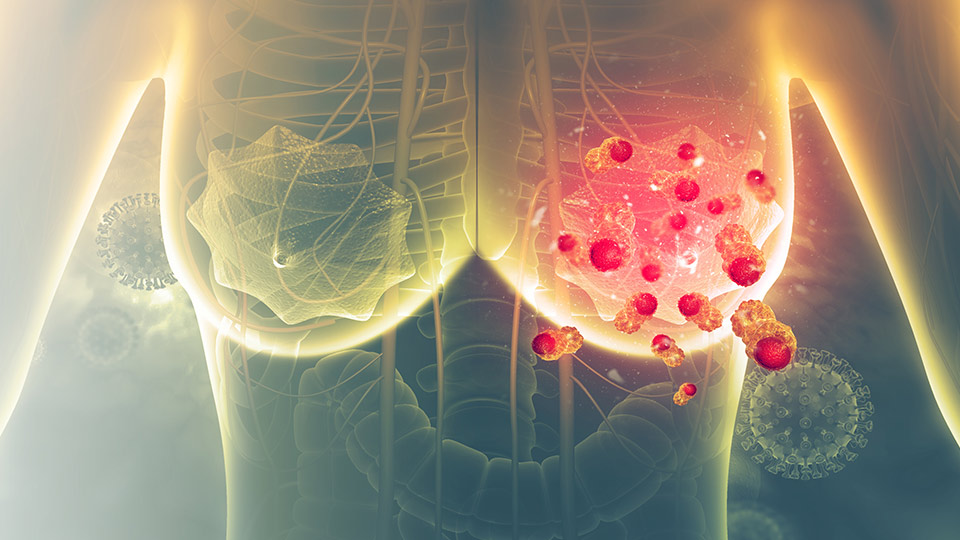 Mj’s study focussed on MDA-MB-231 – a type of breast cancer cell line that is known for being extremely invasive.

And what makes her research special and different to previous studies, is the fact she used a 3D model.

Most scientists look at how cancers interact with cells by either growing tumours in mice or by using 2D monolayer cultures – cells that are grown in a dish, flat and side-by-side, under controlled conditions.

Growing cancers in the body (in vivo) of mice is not representative of what happens in humans due to differences in the microenvironment, and the 2D models also have their limitations as tumours are not flat, they are 3D and touch cells that are all around them, not just those to the sides of it.

As Mj’s PhD supervisor Dr Mhairi Morris, who also co-authored the study, describes it, modelling tumours in 2D is like “playing football lying on the ground side-by-side – possible, but rubbish”.

Dr Morris is Loughborough’s lead for developing 3D cancer models – cell-based models that are created in the lab (in vitro).

Modelling cancer in 3D allows researchers to see how cancer cells interact with all cell surfaces they come into contact with, giving a more accurate picture of what happens inside the human body.

Under the guidance of Dr Morris and also Loughborough’s Dr Liz Akam, an expert in hMSCs, Mj developed a 3D model that allowed her to explore the relationship between hMSCs and MDA-MB-231 breast cancer cells.

She created 3D spherical tumours by mixing (‘co-culturing’) hMSC cells with the cancer cells and suspending them from the lid of a tissue culture dish.

Once the ‘spheroids’ were formed, she embedded them into the jelly-like matrix that mimics the environment breast cancer cells would be in inside the body. 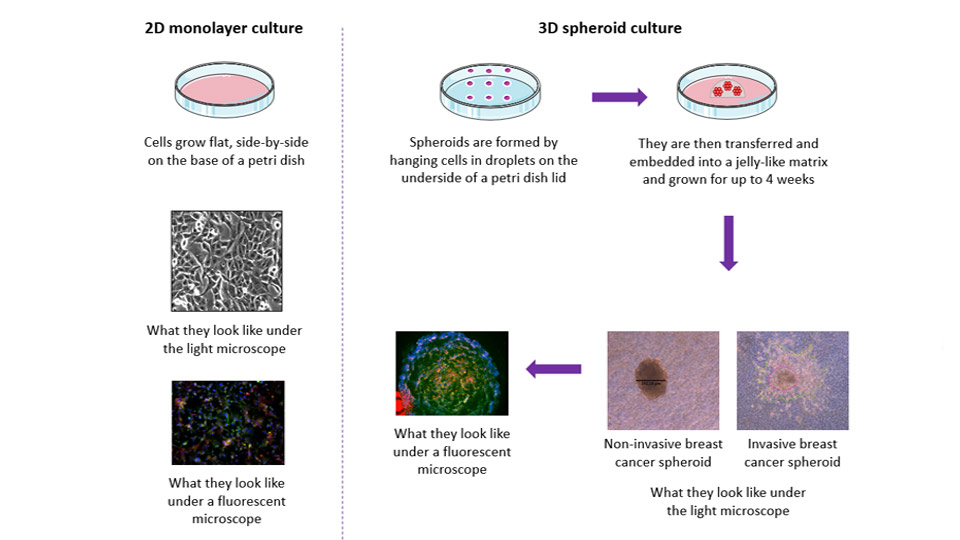 Mj observed the changes of invasiveness over a five-day period by measuring the length of the projections the cells put out into the matrix - a known measure of cell invasion - and found the cancer cells became less invasive when mixed with the hMSCs.

Her results provide new evidence for how cancer cells and stem cells interact in the body and further highlights the effectiveness of 3D models.

Mj’s research is also important for scientists working in the field as, while determining the optimum co-culture conditions to create the spheroids, she found the source of serum – a supplement added to the cell culturing media, which contains a mixture of necessary proteins, hormones and other growth factors that aid cell growth – had a significant effect on the growth of the cells investigated.

Mj has published her findings in the Bioengineering journal in a paper titled ‘Determining Conditions for Successful Culture of Multi-Cellular 3D Tumour Spheroids to Investigate the Effect of Mesenchymal Stem Cells on Breast Cancer Cell Invasiveness’.

She said of the study: “Continuing to investigate the interaction between hMSCs and cancer cells in 3D systems is now essential to further understanding this relationship and the impact of the tumour microenvironment on metastasis.

“Using 3D models such as the one used in this study provides an opportunity for in vitro relationships to be investigated and novel research on the mesenchymal stem cell-driven biochemical modulation of breast cancer cell metastases to be conducted.

“I hope my research enables us to further understand the relationship between hMSCs and breast cancer cells in order to develop new therapeutic methods to prevent breast cancer metastases.” 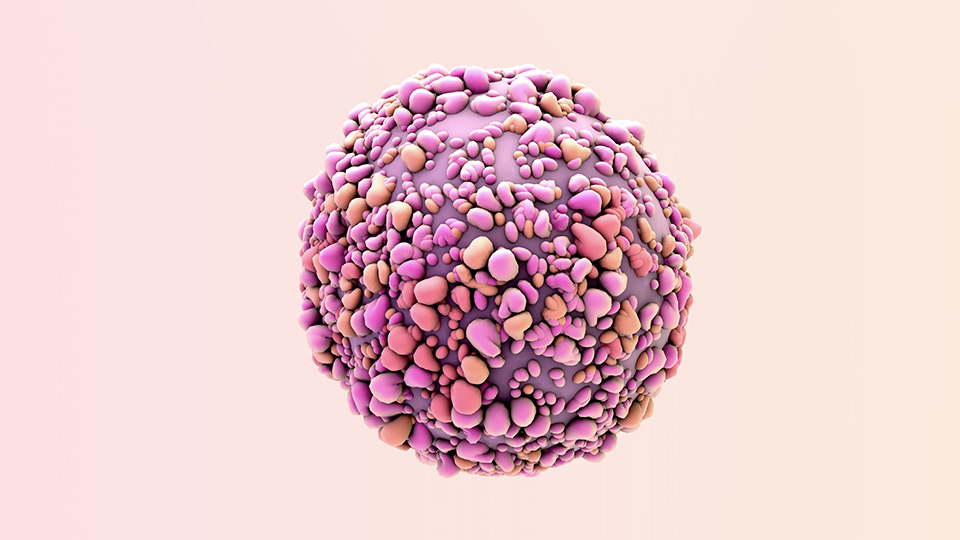 The research found the cancer cells became less invasive when mixed with the hMSCs. Image courtesy of Getty Images.

Mj is already building on her research and is now investigating the role that exercise has on the relationship between hMSCs and breast cancer cells and whether physical activity could reduce invasiveness even further.

Dr Morris commented: “We’re so proud of Mj’s hard work and we’re thrilled to see her paper published in such a prestigious journal.

“The future of in vitro modelling is in three - or more! - dimensions and we’re excited to be bringing our unique spin on this – co-culturing breast cancer cells with hMSCs and seeing what effect exercise may have on this interaction.”

You can find Mj’s paper, which also lists Loughborough’s Soukaina Bahsoun and Dr Liz Akam as co-authors, in its entirety here.

This research is associated with the Engineering and Physical Sciences Research Council Grant EP/L015072/1.