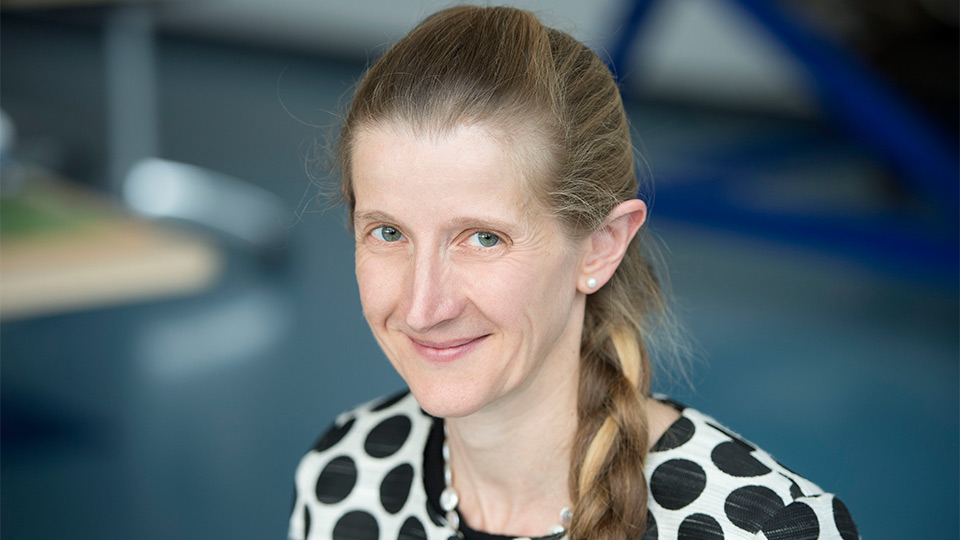 Loughborough’s Pro Vice-Chancellor for Teaching Professor Rachel Thomson is a woman of firsts.

In 2014, she became the first female Dean within Engineering at the University and now she holds a new title – the first woman from Loughborough to be elected as a Fellow of the Royal Academy of Engineering.

The Academy announced its latest cohort of Fellows today (18 September) and it is understandable that Rachel says to be elected is a "big honour” as the Fellowship represents the nation’s best engineering researchers, innovators, entrepreneurs, business and industry leaders.

It’s clear that the esteemed Professor of Materials Engineering is at the top of her game, but what’s fascinating is that the academic star did not plan out her career at an early age.

In celebration of her latest achievement and in a bid to encourage more girls to pursue STEM (science, technology, engineering and mathematics) subjects, Rachel is sharing how her journey into the engineering industry began, the things that motivate her and her advice for female pupils making decisions on what to study.

"If you said to me my dream career as a child was to become a senior engineer, I would say no, that's not the case.”

It may not come as a surprise that as a young girl Rachel Thomson did not, in fact, picture herself becoming a respected academic and a major decision-maker at a world-renowned university.

Rachel, whose father was a bank manager and mother a pathology lab technician, was never pushed to study a particular subject but even from an early age she felt drawn to science.

“I was always interested in understanding how and why things work. There was a curiosity-driven element,” Rachel explained, “I kept my options open but as I moved up through education, I found I enjoyed the sciences more and more."

In secondary school, Rachel chose to take both sciences and languages at GCSE - and despite studying difficult subjects such as Latin and Greek, she admits it was Biology she wasn’t a fan of as she was “too squeamish”!

After passing her exams, she headed to a sixth form college to study A-Levels in Maths, Further Maths, Physics and Chemistry.

Rachel says she chose the subjects she "was good at and enjoyed" and these factors also influenced her decision to study Natural Sciences at Newnham College, Cambridge University.

She also found out her likes and dislikes by undertaking engineering and science-based work experience every summer whilst studying for her A-Levels and she continued to get insights into different industries this way whilst at university.

Rachel said: "It was really helpful in deciding to go into engineering - I got to see what opportunities were out there and what I enjoyed doing. I think it's important to do work placements and find out what excites you."

A placement also helped determine the PhD Rachel studied for. One firm she worked for over the summer was keen to hire her after graduation and when she turned them down to continue her studies they sent her a list of PhDs they were sponsoring.

She selected one of them and subsequently did her PhD in the Department of Materials Science and Metallurgy at Cambridge – and this gives an insight into how Loughborough's Pro Vice-Chancellor operates.

"I chose the PhD position due to the exciting topic, enthusiastic supervisor and its links to industry,” Rachel said, “It wasn’t something I’d necessarily planned for, it was a fortuitous set of circumstances.

"I just try to put myself in a position where I can make the most out of the opportunities presented and try and make a difference where I can."

After getting a BA, MA and PhD under her belt, Rachel made the decision to apply for a prestigious Engineering and Physical Sciences Research Council (EPSRC) postdoctoral fellowship.

She was successful and spent a further three years at Cambridge as an independent Research Fellow before applying for a lectureship position at Loughborough University in 1995. 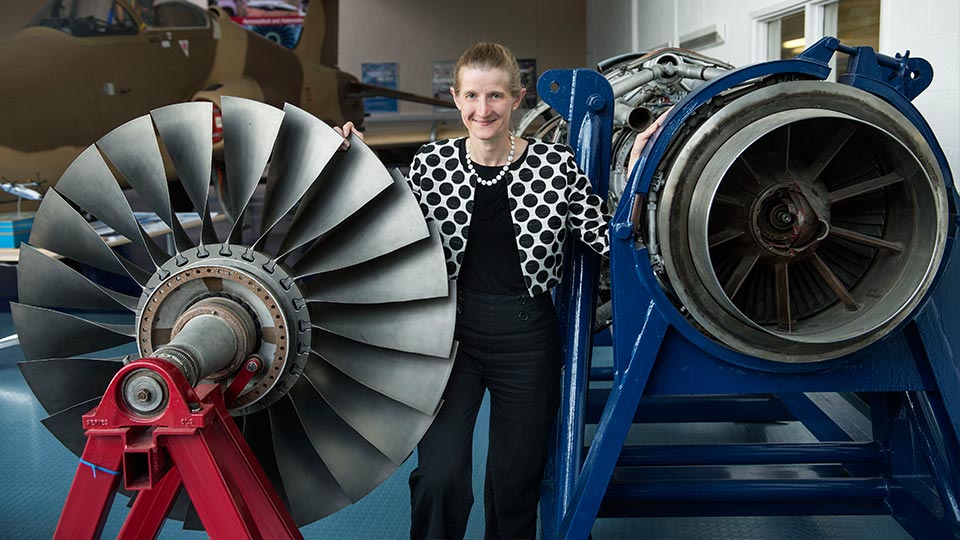 Rachel was appointed to the role, made a senior lecturer four years later and in 2002 was promoted to a Chair in Materials Engineering – one of the youngest professors ever appointed at Loughborough.

After a period as Head of the Department of Materials, Rachel became Loughborough's first female Dean of the School of Aeronautical, Automotive, Chemical and Materials Engineering in 2014 and two years later she was appointed Pro Vice-Chancellor for Teaching.

On top of the strategic responsibilities her role brings, Rachel is still teaching students and remains an active researcher in materials for energy applications.

She is working with companies in the power generation sector and is developing new materials for both higher temperature and more efficient operation of plant, in addition to being accurately able to predict the safe service lifetime of materials.

Outside of University life, Rachel is an avid runner and she has competed internationally for Great Britain a number of times in her age group in duathlon.

When asked how she keeps herself motivated, Rachel said: "I have a drive to always want to be the best I can be.

"Running, for example, I ran a 5km Race for Life and I then challenged myself to do it faster and then entered a 10k - you always push.

"I don't think I could do everything I do if I didn't enjoy it too. I also feed on the fact that students are really keen to learn and progress.

"I love seeing the students I supervise succeed and it's great to feel you played a small part in someone getting a step-up in their career, that's really fantastic.

"I think you've got to be passionate about whatever you do, otherwise you won't succeed."

Rachel says she has received tremendous support from Loughborough University, her colleagues in academia and industry, and family over the years, and says her success and appointment as a Royal Academy of Engineering Fellow reflects this.

"I've had a lot of support from Loughborough over many, many years which I'm really grateful for and I suppose in a way [becoming a Fellow] is a measure of the confidence Loughborough have shown in me," Rachel said.

"I've been able to build my research group here and the University has supported me in getting research grants and investing in equipment and people.

"It's recognition of a team effort over many years."

Rachel is one of 50 new Fellows that will be formally admitted to the Royal Academy of Engineering at its AGM in London today and she will add her expertise to the Fellowship of nearly 1,600 world-leading engineers from both industry and academia.

She commented: “The achievements of our new Fellows highlight the critical role engineering has in addressing major societal challenges and ensuring our readiness for the future.

“We are very much looking forward to working with them as we continue to fulfil our vision of engineering at the heart of a sustainable and prosperous society.” 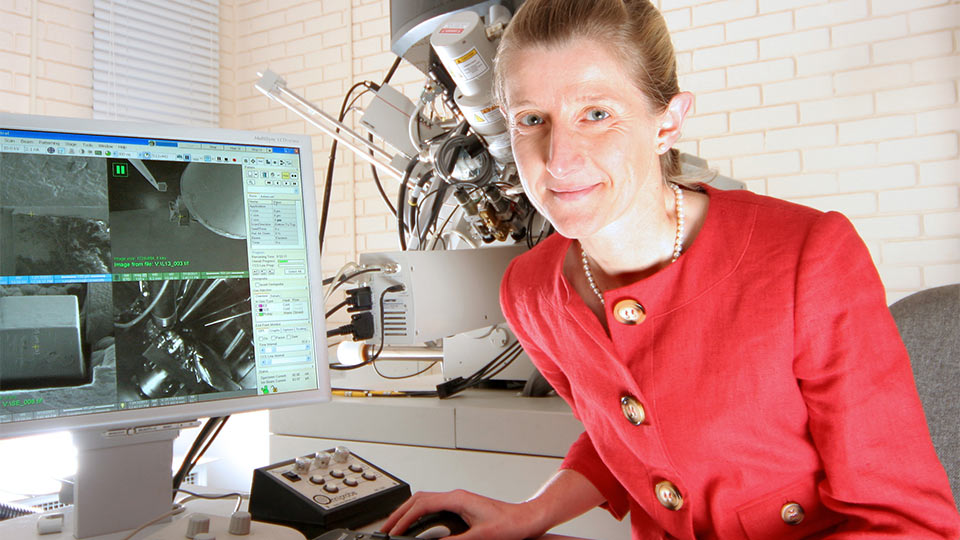 Rachel hopes her appointment as a Fellow will inspire young girls to study STEM, something she believes is important for the future of the engineering industry.

She said: "There were only six girls studying Physics out of around 120 students on my degree and at times in my career, I've found myself to be the only female in meetings, but I just get on with it.

"However, engineering is about teamwork and working in diverse groups to deliver particular solutions, and the best teams have a range of views and ideas within them and it's important that women have a voice at the table."

Rachel puts the low number of girls studying STEM subjects in part down to a lack of awareness of the wide career opportunities available.

She said: "I just don't think what’s on offer is obvious to young people, they don't realise that they could be doing all sorts of different things and I think some of it may be around the language of ‘an engineer’.

“I think sometimes people think that a career in engineering is limited to fixing washing machines or cars, rather than realising the wealth of opportunities to drive exciting industrial developments for the benefit of society. It really is a career of tomorrow.”

Rachel continued: "I think we need to have people in those careers explain this to primary school children because by the time they get to secondary school they've often already decided what they want to do. It's something we need to work on."

When asked if she has any advice for youngsters thinking of considering studying STEM subjects, Rachel said: "Don't be put off! Go for it! My advice is work hard, play hard. Believe in yourself so that you can achieve what you want to achieve.

"I think there's something around subjects that are perceived to be hard. Maybe it's a confidence issue but I'd say keep working at it because the reward will be worth it."

Becoming a Fellow of the Royal Academy of Engineering is a huge milestone. Now Rachel has added this to her list of achievements, has she broken the habit of a lifetime and set any career goals for the future?

"No!” she laughed, "I just want to make sure I can make a difference in the job I'm in."

Biographies of the new elected Fellows will be available from Tuesday 18 September on the Academy’s website.

As the UK’s national academy for engineering and technology, the Academy brings together the most successful and talented engineers from academia and business – the Fellows – to advance and promote excellence in engineering for the benefit of society.

The Academy harness their experience and expertise to provide independent advice to government, to deliver programmes that help exceptional engineering researchers and innovators realise their potential, to engage the public with engineering and to provide leadership for the profession.

It has three strategic priorities:

It brings together engineers, policy makers, entrepreneurs, business leaders, academics, educators and the public in pursuit of these goals.

Engineering is a global profession, so the Academy works with partners across the world to advance engineering’s contribution to society on an international, as well as a national scale.