A series of videos depicting the worsening stages of dementia has been created to help families identify the care needs of loved ones.

Six short films have been produced by researchers from Loughborough University with the aim of helping sufferers and relatives understand what level of care is required for relatives at various stages of dementia.

They have been released to coincide with Dementia Action Week, which runs from today (21) until Sunday (27).

The five-minute movies show the difficulties faced on a good day, an average day and a bad day for people with early diagnoses through to the late stages – giving people with the condition the tools to then translate their needs to healthcare professionals and receive the best available support.

The personas (outlined below) are played by actors and each has distinct characteristics.

All of the information is based on solid academic research.

Professor Sue Hignett, an expert in Healthcare Ergonomics and Patient Safety at Loughborough University, is leading the project with Professor Eef Hogervorst, an expert in Dementia, and research associate Charlotte Jais.

Prof Hignett said: “The Loughborough dementia personas are a series of videos showing how life can change for people living with dementia from an early stage diagnosis (Alison) through to later in life (David).

“They show how dementia can affect people on good days, average days and bad days to represent how life really is through the eyes of both people with dementia and their carers.

“The personas are based on robust scientific research to give an evidence-based communication tool.

“They were initially designed for use as a communication platform between architects, clinicians and care providers to help in the design of the care environment – at home and for nursing homes.

“It has also been suggested that they could be useful for staff handovers to explain the type of day – good, average, bad – that a resident is having, and how this might affect their dementia symptoms.

“A further use has been suggested to help with communication within families to both understand the current stage of dementia for their relative, and to plan for future care.

Future care planning might include making adaptations to the home to support life-long care as a person’s symptoms change.

“The planning would need to start during early stages (Alison) to think about the quality of life and support (care needs) for Barry, Christine and David.” 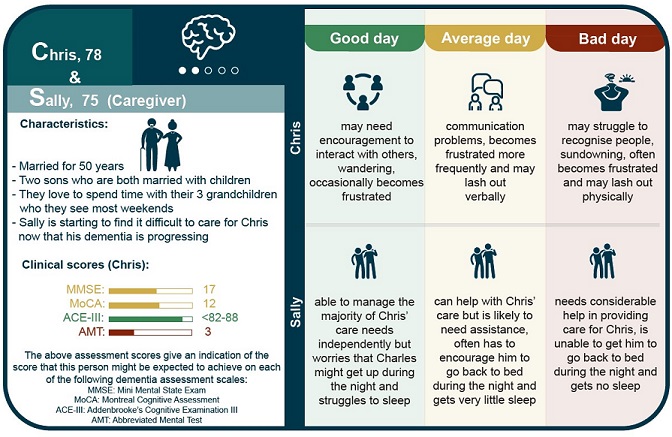 A profile (above) outlining a good, average and bad day for the personas of Chris and Sally

The films form part of a wider project which involves the creation of a ‘dementia house’ – a model home designed to showcase innovative solutions to the everyday issues experienced by people with the condition.

The model home is due to be launched in July at the BRE Innovation Park in Watford.

The personas have been used to demonstrate how the building can be adapted to assist with all the various stages of dementia, giving families demonstrable solutions to the wide variety of challenges the condition generates.

• Widowed, no children
• One younger sister who lives in Australia, they catch up once a month via Skype
• Enjoys reading, dancing and going out for dinner with friends
• Used to work in a shop and enjoyed chatting to customers
• Has worn glasses since the age of 23

• Never married, no children
• Two younger siblings who work full time
• Is a retired postman and spent much of his working life outside
• Enjoys gardening and staying active
• Likes to be able to watch football on TV

• Married, has one daughter who lives nearby
• Used to work as a Psychology lecturer and is very interested in people.
• Sometimes she is quite happy to sit and “people watch”
• She is a talented musician and enjoys playing the piano and listening to music
• Has used hearing aids in both ears since the age of 70

• Married, has two sons
• Used to work as an office manager and spent much of his working day in boardroom meetings
• Has enjoyed painting since he was a child and particularly likes to paint landscapes
• Has used a walking frame for the last 5 years