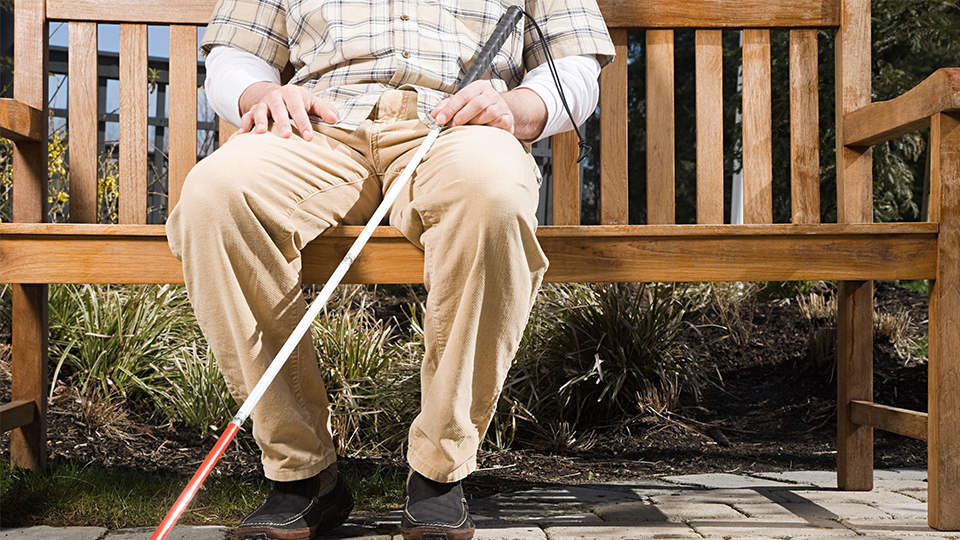 New benefit cuts are set to put an unacceptable strain on many blind and partially sighted people, who already find it hard to meet their material and social needs, research by Loughborough University has found.

Carried out on behalf of the national sight loss charity Thomas Pocklington Trust, the study found that state benefits such as Personal Independence Payments do not in most cases fully cover the additional cost of being blind or partially sighted. However, these benefits have been topped up by disability-related premiums in Employment and Support Allowance, which are due to be discontinued.

Only one in four working age visually impaired people are in work. Many rely on benefits to try to achieve a fulfilling life.

The research was undertaken by Loughborough’s Centre for Research in Social Policy (CRSP) and identified the minimum income needed by visually impaired people to achieve an acceptable standard of living compared to benefit levels.

Its findings feature in a new report, ‘Experiences of Living with Visual Impairment: Matching Income with Needs’, launched today by Thomas Pocklington Trust at Westminster. The report investigates the experiences of visually impaired people living at or below the Minimum Income Standard and the impact on their lives.

It found that those living on a low income must prioritise their stretched budget to meet basic needs, such as getting food on the table and keeping the home warm.

The ability of participants in the study to meet other needs, allowing them to participate in society and avoid isolation, varied considerably. Some were able to live a varied social life, particularly if supported by family and friends. Some received help from social services or from voluntary organisations that helped them tackle some of the practical challenges of everyday living. However, some also found life tough, especially where they lived in rural areas, had other health conditions or did not receive support from local networks.

Visually impaired people on low incomes are also often unable to afford the high up-front costs of assistive technology that can massively increase their independence.  Many have limited savings, and suffer from financial insecurity. Participants in the study voiced strong anxiety about the prospect of cuts to services and their benefits being reassessed, and the uncertainty that this brings to their lives.

Thomas Pocklington Trust is calling on the government to reconsider cuts in the benefits system to ensure that it meets the needs of blind and visually impaired people.

A spokesperson for Thomas Pocklington Trust said: “We urge the government to ensure the benefit system effectively supports blind and partially sighted people. The government should commission research looking at minimum income standards for disabled people, and must take their needs into account when setting policies in areas such as benefit rates and minimum wages.”

CRSP academic and lead author of the report, Katherine Hill, said: “Visually impaired people on low incomes draw on many different resources to try to maintain a reasonable living standard and take part in society. Some get a lot of help from family and friends or from voluntary organisations, but others are less well plugged into these networks.

“Disability benefits have provided an essential lifeline, and reassessment causes anxiety and uncertainty among some of those we talked to. A system that provides a stable and adequate income is essential to help them maintain their independence.”