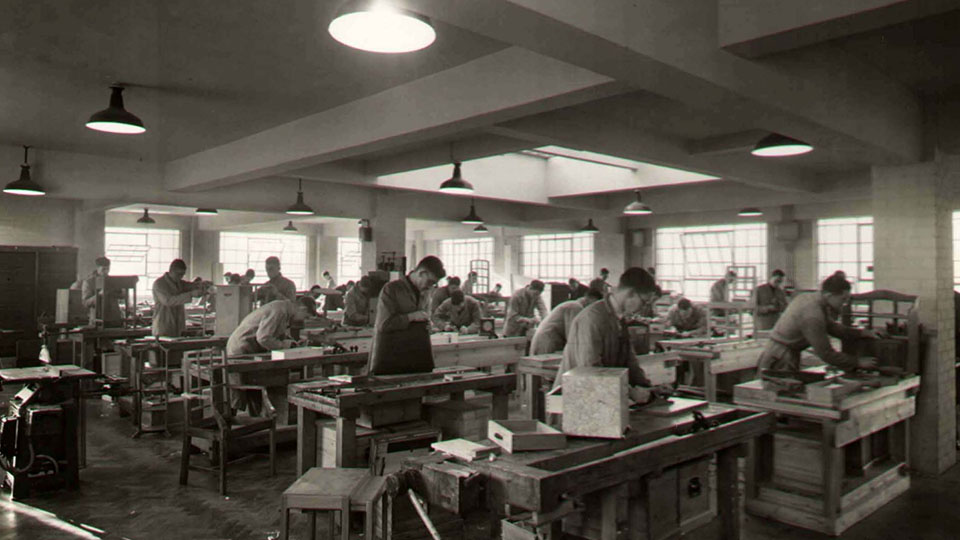 Loughborough University will unveil a rich collection of period furniture for auction from the Handicraft Unit, a programme established in the 1930s which trained students in furniture making under leading craftsmen.

This unique part of Loughborough’s history emerged from today’s internationally-recognised Design School where students were required to dedicate time each week to the practice, led by two of the most famous proponents of the Cotswold School - Peter Waals and Edward Barnsley.

Notable features of the Cotswold Tradition style of making were the careful choice of solid wood to produce well-proportioned and functional pieces as well as open-construction, dovetailing or pinned joints.

The work produced went directly into use at the college, as students had to make their own bedroom sets consisting of drawers, chairs, wardrobes and bookcases.

Often, the students would carve their initials into the finished pieces and Loughborough Vice-Chancellor Professor Robert Allison’s father’s work was discovered amongst the collection.

As a result of the Handicraft Unit, the University has a collection of museum-quality furniture made under the tutelage of key luminaries of the time.

Whilst the University will retain key items, a surplus of bedroom sets and chairs will be sold in an online auction from 8 – 10 September managed by TV auctioneer and Loughborough alumnus Phillip Serrell, known for his appearances on the BBC’s Bargain Hunt and Flog It! programmes.

Proceeds from the auction will be donated back to the University to support future students and cutting edge research projects.

The collection is also set to feature in a new public exhibition produced by LU Arts and organised by the University Archivist Jennifer Clark.

Alongside a set of key items, it features some of the fascinating material from the archives including sketch books, leaflets and technical drawings.

The exhibition opens at Martin Hall Exhibition Space on 8 – 10 September to coincide with the auction and continues thereafter until 13 October from Monday – Friday, 10am – 4pm.

Taking inspiration from the archive material, LU Arts has also commissioned artist Giles Round to re-design its offices to incorporate items from the collection.

For further information on the auction items and viewing arrangements, visit the website.