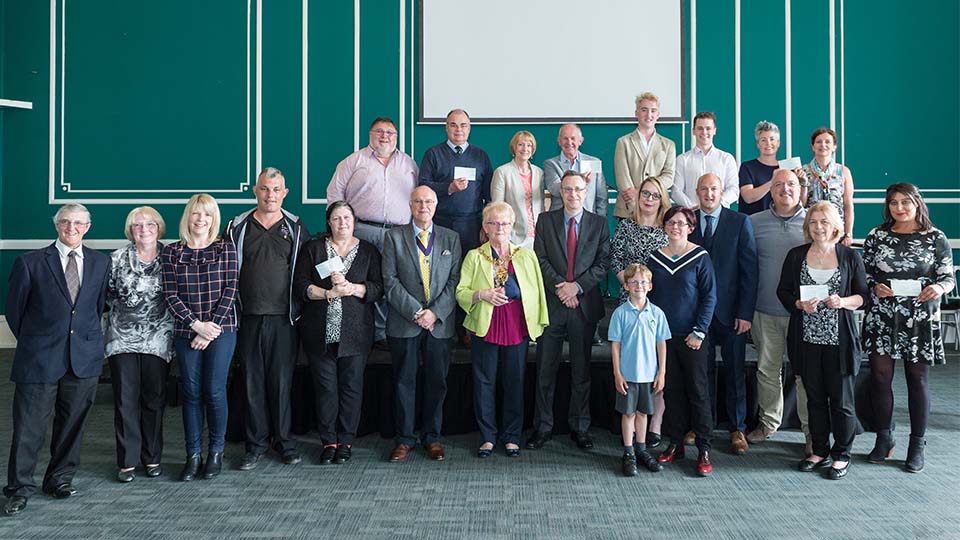 The event, which took place at the Town Hall earlier this month, saw prizes awarded to students of the University whose volunteering efforts have helped the local community.

Receiving the TS Shipman Prize was Jake Brown for his social action project, Utilise. Working with Fearon Community Centre and Transition Loughborough, Jake has been instrumental in making it a success.

The project uses perfectly good food ‘waste’ thrown away by retailers to provide quality, affordable meals. It operates on a ‘pay as you feel’ basis, whereby those who can afford to make a contribution for their meal will be covering the costs for those unable to pay.

Since inception, Utilise has served over 1200 meals to local people, saved 1300kg of food from landfill and generated £2500 towards Fearon Community Centre activities.

Receiving the Hannah Prize was George Nixon. He was nominated by a neighbour for the considerable goodwill he showed them after returning home from a lengthy hospital stay.

George visited in order to see what he could do to support, giving his mobile number and offering to help at any time – from taking the bins out to being mindful of noise at night.

His nomination read: “George and his housemates are a credit to the University and the epitome of good neighbourliness.”

Commenting on the student achievements, he said: “It was an absolute honour to reward our students for their outstanding voluntary efforts.

Each year, they continue to demonstrate how dedicated they are to helping others in the community, and as a University, we are incredibly proud.”

Joining Richard at the ceremony was the Mayor of Charnwood Councillor Pauline Ranson and other local dignitaries.

Also recognised at the event were ten Charnwood charities and community groups that have received support from the Open Fund, one of the University’s community donations funds.

The fund is dedicated to supporting community or voluntary groups in their work.

Organisations and projects that have received funding are: