Dressed smartly for his interview, sitting and in the shadow of a decommissioned fighter jet in the atrium named after him, ex-RAF test pilot Captain Desmond Penrose is speaking passionately about the quality of the UK’s engineering industry. 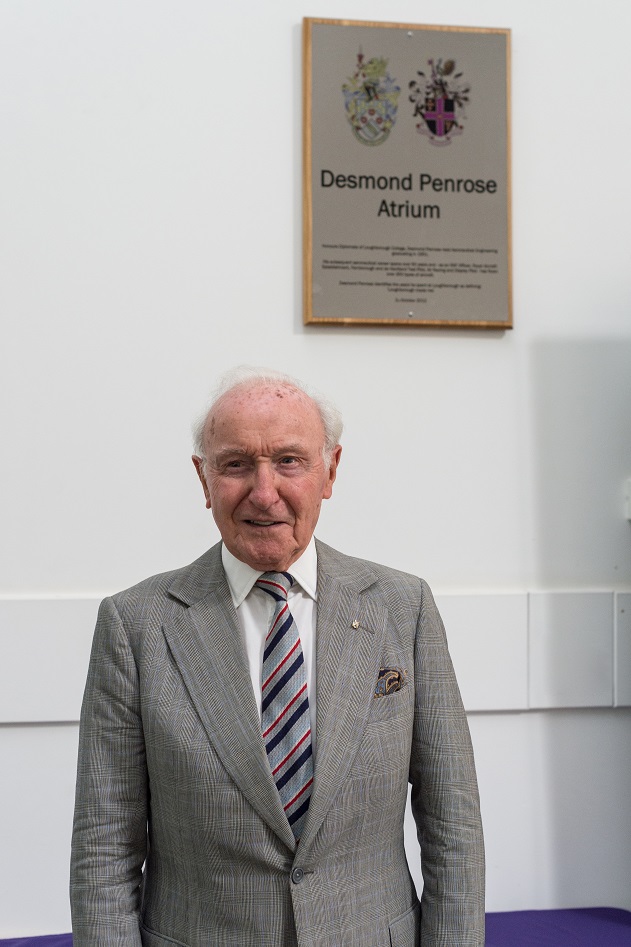 “Why shouldn’t I donate some money for the furtherance of women in engineering?" he says.

Recently, the octogenarian made a generous donation, of an amount he does not want to disclose, which will fund a two-day residential engineering course at Loughborough University for 50 girls, aged 14 to 15-years-old.

The goal of the Loughborough initiative is to encourage more youngsters to consider STEM (science, technology, engineering and maths) subjects as a future career.

Female youngsters, that is – although Capt Penrose points out the distinction is purely academic.

“I don’t feel that there’s a male and female difference in engineers,” he says. “The challenge is encouraging girls to be interested in the subject from an early age.”

It’s a much-needed boost as it seems the engine has stalled.

According to the National Centre for Universities and Business, the proportion of young women studying engineering has remained virtually static since 2012.

“We need to enhance the possibility of women choosing engineering over other subjects,” says Capt Penrose. “It’s something their male counterparts don’t need.

“The preconceptions that females can’t make it in STEM subjects should be put completely to one side, it’s just rubbish.

“I’m certain that if we can get more females involved in engineering it would be for the furtherance of our country.”

Just 9% of the British engineering workforce is female, says the Institute of technology and Engineering (IET) – well below other European countries such as Latvia, Bulgaria and Cyprus who lead with nearly 30%.

Loughborough’s programme aimed at improving these statistics will be led by the University’s Schools and Colleges Liaison Team.

Manager Kirsty Wilkinson says the event will take place in summer 2018, and will be an opportunity to open the eyes of young girls to the delights of science and engineering.

“The role of women in STEM is growing, but it’s still lightyears behind what it should it be," says Kirsty.

“Desmond’s donation will be extremely useful for bridging that gap and we thank him for his generosity.”

In 1951, he graduated in Aeronautical Engineering, moving seamlessly into the ranks of the RAF and becoming a test pilot – making sure the latest airplanes were fit for the “average pilot”, as he puts it.

It was a much different era in engineering and aeronautics, he says. One which gave the opportunity to train as an astronaut.

“Over the last 10 or 15 years we’ve had a diminution of the sciences in education," he says. His tone is one of genuine concern.

“Loughborough University, or College, was a much smaller educational establishment in those days.

“There were so many different nationalities – the place was buzzing, much like it is today.

“Of the many things I learned here, I had the benefit, when I left, of being able to swear in six different languages.”

He laughs, and politely declines to give examples.

“But I have always said, over the years,” he continues. “That Loughborough turned me from a callow youth into somebody who could confidently go out into the world.

“I went straight from Loughborough on a direct entry commission into the Royal Air Force, and I felt in many ways that the young officers I was with at the time had not received as good an education as I had.”

Capt Penrose learned to fly in the University Air Squadrons and completed his first solo flight in 1948, when he was 17-years-old.

He always had ambitions to be a test pilot, he says.

And, he adds, that the same determination, and possibly some divine blessing, is what is keeping him in the air today.

On April 14, next year, he will celebrate 70 years since his first solo trip.

“We were losing a pilot a week, so I consider myself very fortunate to be here today and to still be flying.

“To celebrate 70 years since my solo flight will mean a lot to me.”

During his Royal Air Force days, while stationed at RAF Farnborough, in Hampshire, Capt Penrose was one of four test pilots to make it onto an astronaut programme.

“Nothing ever came of it,” he says. “But I did all the various tests, including the uncomfortable centrifuge test, but that was it.”

Now, Capt Penrose, 87, is looking to the future of British engineering, and he sees women as big part of that journey.

“It’s a privilege to donate this money in the name of my mother, Margaret Penrose,” he says. “She gave me so much support in the absence of my father, who was away in the Army during the war, and who encouraged my ambitions.

“Now, I want to see the same level of motivation given to all school pupils, not just females, to be engineers.

“We need to get back to being world leaders again.”