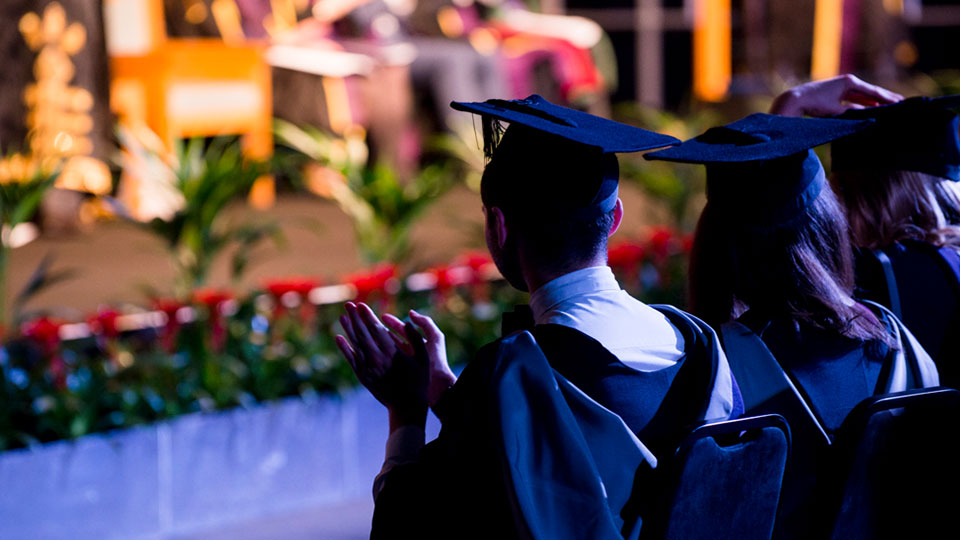 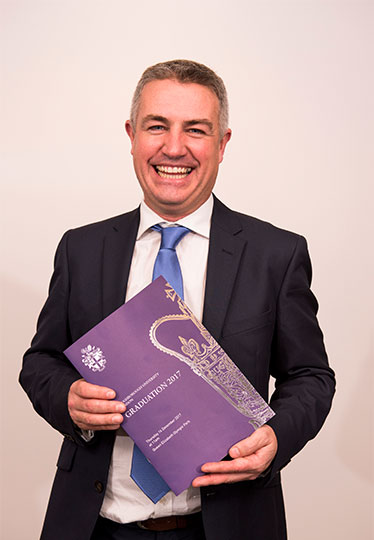 The postgraduate campus, based on the Queen Elizabeth Olympic Park, first opened its doors in 2015. It offers programmes which bring together world-leading scholars, dynamic organisations and creative individuals with the emerging talent and leaders of tomorrow.

One such student is 42-year-old Simon Smallbone, who graduated with an MSc in Sport Business and Leadership. The dedicated father-of-two commuted to the University from his home in Luxembourg for the duration of the course.

Simon, who also graduated from Loughborough University in 1997 with a BA (Hons) in European Business, made the five-hour-round trip on a weekly basis and juggled studying and working full-time as the Director of a marketing consultancy.

Since completing his Master’s degree, Simon has been working with football charity Kick4Life FC and he was given the opportunity to speak at the World Football Summit in Madrid.

He has also started AktivKidz - a business that aims to get more children active by creating participative and non-competitive sporting challenges - which has been selected to be part of London Sport’s Sport Tech Hub.

Speaking of his time at the London campus, Simon said: “It was worth all of the travelling and time away from my family, not to mention the workload I had to complete at home.

“The experience at Loughborough University London has been fantastic. I highly recommend it. The staff are of a very high level and they could not have done more to make the experience enjoyable.”

Twenty-three-year-old Sumaï Bertrand, who graduated with an MSc in Entrepreneurship and Innovation Management, moved from Lille, France, to study at Loughborough University London.

Sumaï, a Dean’s Award for Enterprise student, won the Immediate Impact award for her work as Vice Chair of the Loughborough Students’ Union London committee and came first place in the London Entrepreneur's Challenge with her industry-leading business idea SPKTRA - a free-from, odourless nail varnish that has an easier application thanks to a pen-like bottle.

Next year Sumaï will be launching the product - which also made it to the semi-finals of the Varsity Pitch 2017 - and starting a new job at a leading global consulting and professional services company.

When asked if she has benefited from studying at Loughborough University London, Sumaï said: “Definitely! I have benefited from my course, the lecturers, the activities I took on and the people I’ve met. As a whole it has been great.”

Professor Mike Caine, Dean of Loughborough University London, added: “It has been a wonderful day celebrating the successes of our second cohort of London students. It’s great to see graduates and colleagues share in celebration and reflect on what has been achieved over the last year.”