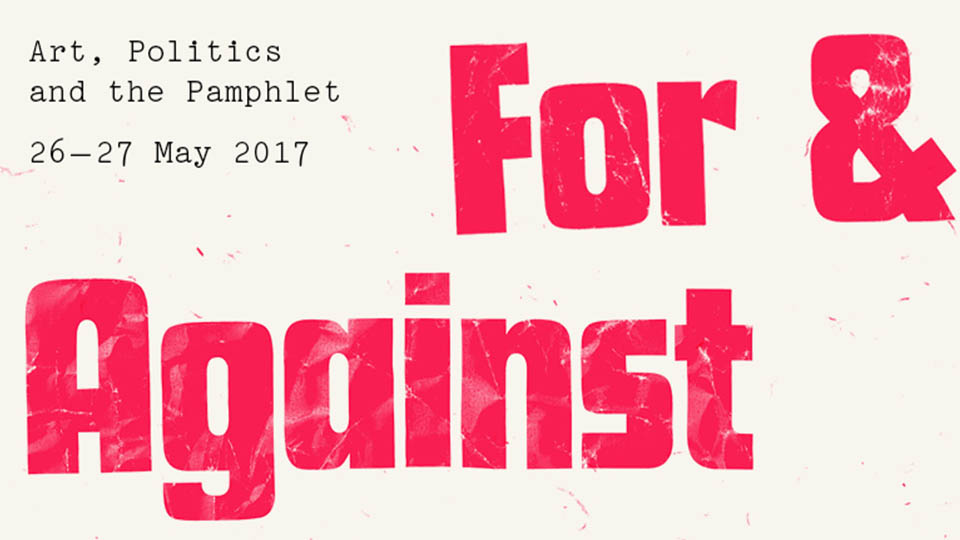 A two-day festival in Loughborough will look at the role of the pamphlet as both an art form and an influential means of political communication.

From 26 – 27 May, ‘For & Against: Art, Politics and the Pamphlet’ features performances, presentations, an art exhibition and the creation of a series of new pamphlets.

The public symposium at Fearon Hall, Loughborough on Friday 26 May will see presentations and ‘rants' from a wide variety of artists, academics and pamphlet makers.

A keynote speech by prominent social media figure and political video blogger Mark McGowan (known online as Artist Taxi Driver) examines what it means to be a ‘political pamphleteer’ in the age of social media.

On Saturday 27 May, the event takes over Loughborough’s Queen’s Park, museum and library with hands-on workshops, performances, processions, exhibitions and music for all to get involved with.

Highlights across the two-day programme include:

Throughout the 20th century, artists have worked and acted provocatively using text, images, and performance, publishing writings and producing pamphlets and manifestos. The last decade has seen art’s increased engagement with political and social issues, and a preoccupation with revolutionary movements and global politics.

The event responds to research into this field by the Radical Aesthetics-Radical Art (RaRa) project which was initiated in 2009 at Loughborough University under the auspices of the Politicized Practice Research Group by Dr Jane Tormey and Dr Gillian Whiteley.

‘For & Against: Art, Politics and the Pamphlet’ is part of Radar, Loughborough University’s contemporary arts programme that engages with academic research.

Radar is the contemporary arts strand of LU Arts - the arts programme of Loughborough University. Twice a year, a group of artists are selected to engage with research conducted by the university and use it as a stimulus to inform and develop new works. Its purpose is to deliver a high-quality programme of artistic outputs which inspire participation and debate through cross-disciplinary working with artists and academics.

Although facilitated by the university, Radar has a strong community focus; working with artists whose practice is located within the public sphere, and presenting its output both on campus and throughout Loughborough. Audiences are able to engage with ideas and issues not only through the artistic outputs but also through an accompanying series of discursive events.