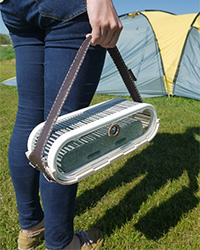 A Loughborough design student has created a unique camping accessory that can warm a tent for up to five hours – as part of a drive to help keep campers safe from carbon monoxide (CO) poisoning.

Holly Freemantle, 22, a final year Industrial Design and Technology undergraduate from Somerset, came up with the idea for a portable camping heater – called HEATA™ – after reading about the death of a teenage girl who died from CO poisoning after her family brought a disposable barbeque into their tent to keep warm.

CO is called the ‘silent killer’ because you can’t see it, taste it or smell it, which means it can kill quickly without warning. CO is released when a carbon-containing fuel such as gas, oil, coal, coke, petrol or wood, does not burn fully because not enough air is available.

HEATA™ will be exhibited to the public at the Loughborough University Design School Show from Friday 12 June to Monday 15 June, 10am until 5pm.

The prototype consists of soapstone block which is placed on to a barbeque to heat up before being transferred with a handheld transporter and guard to a case made of toughened glass and PET, which has a high melting point. The soapstone block is capable of reaching temperatures of up to 320C, which is why the casing contains a door and fire retardant carry handle.

Holly, who lived in a tent for three months last summer, said her initial idea was for a portable CO alarm for camping, but she progressed this into a design to help address the real problem – how to heat a tent in a safe and sustainable way. Further safety tests will be needed should the design go into production.

Holly said: “I wanted to help protect campers from CO poisoning by coming up with an idea to heat tents in a safe way. HEATA™ does away with the need for a naked flame and while I have carried out tests on the soapstone block itself and some groundsheet materials, more rigorous testing will be needed.

“I wanted to try to make a difference with this design, and if HEATA™ did make it to market and helped to save even one life, it would be great to know that my product had made a difference. The aim of design overall is to ultimately improve people’s lives, and if we can achieve that as designers, then we have done our job. I feel really proud of what I have achieved as part of this course.”

Professor Tracy Bhamra, Dean of Loughborough Design School, added: “Holly’s HEATA™ has the potential to both improve people’s camping experience and remove dangers. It is a thoughtful design which encourages campers to be more aware of their safety when enjoying the great outdoors. Holly has demonstrated excellent problem-solving skills through this final project.

“The Design School Show is a brilliant opportunity to meet Holly and other talented students and this year – for the first time – we are proud to be exhibiting work from our Ergonomics and Design Ergonomics  students.”