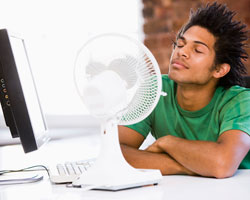 The landmark study by the University of Sydney, Loughborough University and the University of Ottawa, Canada, calls for a rethink of public health advice on coping with extreme temperatures. It is published today (Tuesday 17 February) in the Journal of the American Medical Association (JAMA).

Lead researcher Dr Ollie Jay from the University of Sydney said electric fans are a simple and cost-effective tool for preventing heat related illness and current guidelines are putting the public at risk.

Professor Havenith states: “The existing health advice on using fans in heat waves is based on a misconception of how heat is lost from the body in the heat. It does not take into account the impact of sweat evaporation appropriately. Drs Jay and Hodder have shown this recently in a theoretical study and this new study delivers the first data to show this in actual heat exposures.”

Dr Jay from the University of Sydney’s Faculty of Health Sciences added: “Older people in particular are at risk of heat stress and heart attacks during hot weather and sometimes a fan is the only cooling device they can afford.

“The current guidelines are based on an outdated theory that fans are dangerous when air temperatures exceed skin temperature, like the idea of a turkey cooking faster in a fan assisted oven.

“This doesn’t take into account that airflow created by a fan increases the evaporation of sweat from the skin, which is one of the key ways in which our bodies cool down.”

Using a controlled heat chamber, Dr Jay and colleagues from Loughborough and the University of Ottawa examined the effect of fans in conditions that cause rapid increases in heart rate and body core temperature.

They found fans were still beneficial at 42 degrees Celsius or 108 degrees Fahrenheit, up to seven degrees higher that the 35-37 degrees Celsius limit recommended by the world’s major public health agencies, including the World Health Organisation.

“The participants actually had a lower heart rate using a fan at 42 degrees than they had without a fan at 36 degrees,” said Dr Jay.

The JAMA study evaluated the effects on young healthy men; however in a previous study the researchers mathematically modelled 10 of the world’s most severe heat waves and predicted similar results for older people. This needs to be proven with future research, and the cooling effect of fans in different types of heat waves (humid versus dry) also needs to be investigated.

With heat waves predicted to become more prevalent, it is important to update the health advice.

“Heat waves claim lives every year so it’s essential that people who can’t afford air-conditioning know that a fan can be a good alternative and could even save lives,” concludes Professor Havenith.

The full study is published online in the Journal of the American Medical Association today (Tuesday 17 February).