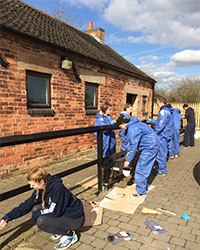 Staff members from Student Services at Loughborough University have teamed up with students to transform a canal-side outhouse as part of a volunteering project.

Arranged in conjunction with the Canal and River Trust, 11 members of staff and six students from Robert Bakewell travelled to Sawley Lock to paint Munn’s Store – a space that will be used as a visitors centre and for educating young children about the canal throughout the summer months.

The event was organised in association with Action, the volunteering section at the Students’ Union. Action organises weekly volunteer projects for students and have been encouraging staff to get involved. Over the last 5 years, the HR department have worked with them to organise a day where their staff can work together for the community.

Organiser Sarah-Emmanuelle Haar said: “We arrived at 10.30am and began volunteering straight away. It was a beautiful sunny day which made the project even more enjoyable. Working in a different environment strengthens relationships and increases morale on return to the office.”

Manuel Alonso, a volunteer member of staff from Student Services, said: “It was great to be able to do something different to our day jobs and still feel like we were contributing. It was an excellent day and all the colleagues I’ve spoken to thoroughly enjoyed it. It was a great opportunity for staff to talk to one another where usually their day jobs wouldn’t require them to interact.”

“I particularly appreciated the chance to volunteer alongside students and it was great to see their positive attitude, engagement and pride in the work they did. They are a credit to the University.”