Loughborough University has a long sporting heritage and continues to provide unrivalled sporting opportunities for students. The university has been named University of the Year for Sport for the second time by The Times and Sunday Times Good University Guide 2017. It has won the prestigious title in honour of its unparalleled role in the triumph of the British Olympic and Paralympic teams in Rio. University-linked athletes brought back 42 medals from Rio, and if Loughborough had been a country at the Games it would have ranked in the world top 20.

Loughborough topped the league in a special supplement focusing on the best universities for sport, gaining the most points in each of The Times’ three criteria – success in the British Universities and Colleges Sport (BUCS) championship, in cup competitions and in individual performances in non-team sports.

Loughborough has an unparalleled record of excellence in sport with students winning the BUCS title for 37 consecutive years.

We were named Sports University of the Year in the Times/Sunday Times Good University Guide 2017 and 2014.

At the 2014 Commonwealth Games in Glasgow, past and present students and Loughborough-based athletes won a total of 35 medals. If the University had been a country it would have finished 11th in the medal table.

At the London 2012 Olympic and Paralympic Games, 90 athletes with Loughborough connections competed, winning a total of thirteen medals.

The University was also proud to serve as the Official Preparation Camp Headquarters for Team GB prior to the London 2012 Olympic Games.  The games saw over 520 members of Team GB pass through the campus to collect their kit and several sports basing themselves in Loughborough for their pre-Games training.  As such, it was only fitting that the route of the Olympic Torch Relay took it through the Loughborough University campus.

The campus has the country's largest concentration of world-class training facilities across a wide range of sports, including an indoor athletics centre, outdoor stadium and a 50m swimming pool.  National and regional centres for many sports are located on campus, including national performance centres for athletics and cricket.  Many of these are based at SportPark, the state of the art £15million development that houses many of the country’s top national governing bodies including swimming, volleyball, and wheelchair basketball.

Some of the most celebrated names in sport – including world record breaking athletes Sebastian Coe and Paula Radcliffe, one of the greatest-ever Paralympians, Tanni Grey-Thompson, and World Cup winning England rugby coach Clive Woodward – have studied at Loughborough.  The University's unrivalled contribution to sport looks set to continue with around 200 elite level athletes currently studying or training at the University.

Recreational sport is equally important at Loughborough and there is a popular programme of opportunities for sports enthusiasts of all levels and abilities. The University also has the country’s largest intramural hall sport programme for those students who enjoy being part of a team with an element of competition, but without serious training.

The virtual tours below offer just a fraction of what awaits you at Loughborough. To find out more about our unrivalled sporting facilities, visit the Loughborough Sport website.

The High Performance Athletics Centre (HiPAC) is a first class training facility. The purpose built centre supports the needs of our top international athletes, through to the local community and schools. The centre is available for everyone from the casual user, clubs and high performance users.

Our £6 million facility is a state-of-the-art 50m, 8 lane training pool. The floor of the pool is moveable and it has a 6-tonne moveable boom that runs through the centre of the pool to accommodate lane swimming sessions that are both 25m and 50m long.

The Powerbase gym includes state-of-the-art Technogym equipment, with a number of free weights and weightlifting platforms and equipment, as well as a dedicated cardio mezzanine floor with a number of exercise bikes and watt bikes, treadmills, rowing machines and cross trainers as well as hand bikes and crossover elliptical trainers. The University has recently opened a second gym on campus - the Holywell Fitness Centre.

The Badminton facility comprises of four badminton courts with specially designed non slip floors and plays host to a number of international tournaments throughout the year.

Home to many of the country's top sports governing bodies and national sports organisations, SportPark is a £15m development that acts as a home for many sports bodies, enabling them to gain access to expertise and knowledge from across the Loughborough campus. The purpose-built accommodation houses organisations such as The Amateur Swimming Association, British Swimming, England Cricket Board, England Squash, English Federation of Disability Sport, Great Britain Wheelchair Basketball, Institute of Sport and Recreation Management, The Institute of Swimming, Leicester-Shire & Rutland Sport, Volleyball England and the Youth Sport Trust. 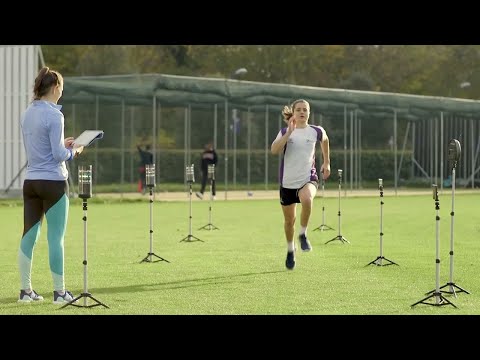