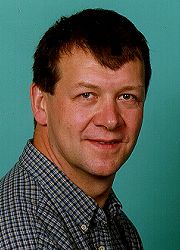 2007: Executive Board Member of Laser Institute of America

I have been continuously involved in developing coherent Optical Metrology Equipment to investigate practical issues in Solid Mechanics, Dynamics and Underwater Imaging with funding predominantly from EPSRC and DTI and significant involvement from industrial co-sponsors. Four externally licensed instruments have been produced:

Pioneering the use of shearing interferometry on humans developed the use of pulsed and electronic speckle pattern interferometry (ESPI) to examine hard and soft body tissue for bio-mechanical applications. This novel work has helped determine strain distributions in the human femur, jaws, fingers and recently the cornea of the eye. All this work has led to rigorous new understanding of human biomechanics.

Experience in developing licensed products led to the establishment of a Loughborough University spin out company, Laser Optical Engineering Ltd, in 1996. LOE has worked synergistically with my academic research group to provide new research opportunities