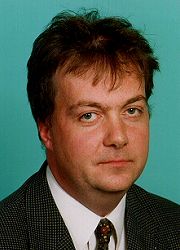 Graduated from Exeter University in 1985 with a BSc in Physics. Following a short term post measuring the performance semiconductor lasers at STC research laboratories, he went on to study at the Institute of Sound and Vibration Research, Southampton University where he submitted his doctoral thesis on the application of optical metrology in fluid mechanics. In 1990 he was appointed to the academic staff in the Department of Mechanical Engineering at Loughborough University, where he currently holds a Personal Chair in Applied Optics.

For work classified as “Frontier Science and Measurement” I have been the recipient of prizes at the National Physical Laboratory Metrology Awards on three occasions: