As part of their final year group project Aeronautical Engineering students from Loughborough University took part in the Institution of Mechanical Engineers Unmanned Aircraft Systems Challenge. The challenge requires teams to design, build and fly an autonomous aircraft around a given course whilst delivering a payload over a given target.

A range of prizes were available for different aspects of the challenge. Loughborough's Team Atlas put in another great performance at the competition, delivering impressive presentations and managing several successful flights. They won both the 'Autonomous Operations' and 'Endurance' prizes - the 'Endurance' being a new event this year. The aircraft performed consistently and reliably, taking off, flying the route and landing without any pilot intervention being required.

The team comprised of:

During the event in a sporting gesture the team also lent equipment and advice to other teams. Nick Ranson even kindly agreed to fly for DHA Suffa University (DSU) university when they needed a pilot, this resulted in them becoming the first University from Pakistan to fly autonomously at the event. 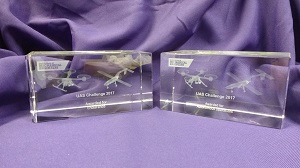 Following on from the event Dr. Bilal Siddiqui, Assistant Professor from the Department of Mechanical Engineering, DHA Suffa University (DSU), Pakistan and his student Mr Shahzaib Khanzada visited Loughborough University for a tour of the Department and our new STEM facilities.

It also gave us great pride to be able to accommodate a visit from Dr Bilal Siddiqui and his student in showing them our new STEMLab facilities and Department and we hope to see them again in the future!