On July 8th, staff, students and external sponsors and supporters arrived in the Department of Aeronautical and Automotive Engineering (AAE) for the formal unveiling of the Loughborough University Formula Student car for 2016. 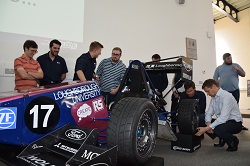 The Team, supported by Mr Scot Layton, a University Teacher based in AAE, presented information on the Formula Student Competition, the developments of particular components for this year and information on the car itself, before revealing the 2016 car to the crowd (pictured bottom.)

Visitors then had the chance to talk to the Team about the new car in detail and in regard to the competion this year, whilst other visitors had an opportunity to network and to view the Formula Student cars from the last four years (below right.) 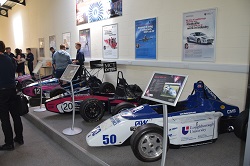 The Team will be competing in Europe this summer, in the UK, Austria and Italy, where they will compete against teams from around the world - we will be keeping you up to date on the departmental website as the competition season progresses.

In 2015, the Loughborough University based Team did extremely well, being placed 6th at the UK event and also did well in Czechoslovakia and Germany - coming 12th in Germany at Hockenheim, which was a great achievement, as the Germany competition attracts the world's top teams.

The Team came 13th overall in 2015 and with the design improvements this year, will be hoping to smash this record.

It will also be the last year that a number of the Team will be involved, as they graduate this summer. Jamie Shone, (Team Leader), James Nurse and Andrew Wells, (Deputy Team Leaders), are just a few of the team who are graduating this year. Jamie has done an amazing job of supporting the Team for the past two years, with a great deal of help as always from his team mates (listed at the bottom of this piece.) But Jamie and the rest of the Team can take away the fact that they supported the Team to their best overall victories.... (to date!)

For anyone interested in supporting the Team, they will be at Silverstone this weekend (14th - 17th July) and they would be really pleased to see you there - if you are unable to travel around Europe this summer, you can follow their progress on the LUMotorsport webite

We wish the Loughborough University Formula Student Team the very best this year - with the work you have all done, you deserve it!