Following on from Silverstone, the 2016 Formula Student Team from Loughborough, competed at the Ricardo Paletti Circuit in Italy (pictured below and below right.) This round was going well, until the Team unfortunately broke a stub axle during the Sprint element of the competition. No-one was hurt through the failure of the part, but it unfortunately meant the retirement of LUMotorsport from the Italian event. 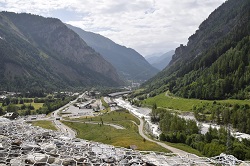 The Team's overall position however, was 26th out of the 39 competing Teams, which, considering the issues the Team had to deal with, was not a bad position to end in! 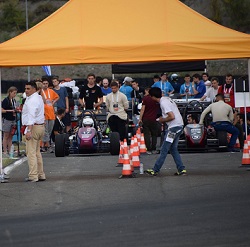 For two days, our Technicians in Loughborough worked frantically to re-manufacture the failed parts and get the parts to Austria in time for the next race. This also allowed time for fitting and testing, prior to the event three days later.

The Team competed again at the Red Bull Ring in Austria (top photograph). After repairing the car from Italy, they managed to compete in all the elements of this competition.

LFS16 was on target to obtain a top 15 Endurance finish, until a gear linkage failure left the car stuck in neutral, on the 18th lap out of 20. Due to completing over 70% of the Endurance, LUMotorsport were eligible to score points for the Endurance and Fuel Economy elements. The Team’s Overall position for this event was 19th.

Thanks came from the Team for everyone’s continued support and particularly to our Departmental Workshop Technicians, for working around the clock to manufacture the replacement stub axles for Austria and get them there in time for the next competition day.

Overall this year, the Team came 35th out of 107 Teams competing. Taking into consideration the issues that the Team has had to overcome, this is extremely respectable!

Outside of their successes on the track, the Team have been involved in a huge variety of activities this year, such as the Fresher’s Bazaar and induction, Headstart, Engineering Experience, Open Days and Student Visit Days, and Automotive Summer Schools to name but a few. 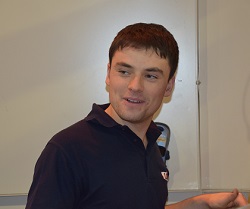 Jamie Shone, Team Leader for LUMotorsport, (pictured left sorting out the brussels at the FS Christmas Dinner last year....), retires this year after five years with the Team, the last two of which he was the Leader. Jamie had this to say about his time with the Team:

“After completing my second year as team leader of the Formula Student team I am very happy to say we have had another successful season. This year presented the biggest challenge the team has ever faced. Not only changing engines but modifying it to take the engines capacity down from 675cc to 607cc to meet the Formula Student rules and then on top of that turbo charging it.

We believe we have created the start of a new generation of Loughborough University Formula Student Cars and have provided a platform for next year’s team to continue its development.

After being in the team since I joined the university 5 years ago I am sad to say this year was my last. Being team leader for the last 2 years was a fantastic opportunity which I have thoroughly enjoyed but it has also been challenging.”

We wish Jamie every success and hope that his memories of being at Loughborough and being a part of the Formula Student Team will stand him in good stead throughout his future.

We are sure that the Team will continue to grow and develop following on from Jamie’s retirement. Adam Peers will be picking up the reins from Jamie for 2017 and hope that you, along with us, will continue to support LUMotorsport in what we hope will be another successful year!