A pioneering manufacturing technique developed to slice metal ‘like butter’ has been adapted by scientists at Loughborough University to improve the quality of biopsy and other biological tissue samples. 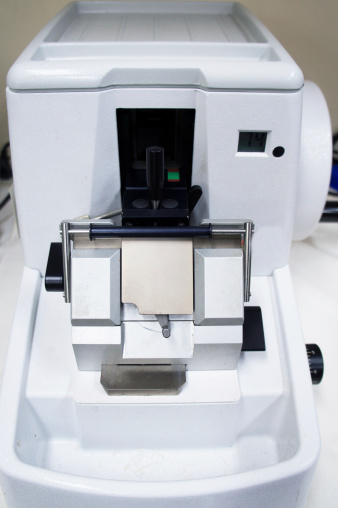 The innovation is an oscillating tool attached to a standard piece of medical equipment known as a microtome – a cutting machine which prepares ultra-fine tissue slices for observation underneath a microscope.

By adding a vibrating blade, Dr Anish Roy and his team from the Wolfson School of Mechanical, Electrical and Manufacturing Engineering, was able to reduce the pressure needed to cut samples and as a result generate a smoother cut which improved section quality.

The new technique, which produces slices of tissue measuring just five microns – about a tenth of the width of a human hair – will also double the life of the microtome’s blade.

Researchers from Loughborough’s Mechanics of Advanced Materials research group originally developed the method as a way of improving the process of cutting durable manufacturing materials, such as carbon composites and nickel alloys, as used in the automotive industry.

But now the technique has been revised for use in the medical world.

Dr Roy said the increased longevity of the cutting tools would yield significant cost savings in healthcare due to the intrinsic use of the established medical procedure.

He said: “The idea behind the improvement is simple. When a sculpture chisels a piece of stone he doesn’t do it with big swinging blows – he taps away with small strikes to give the artist control and accuracy in cuts.

“The same is true here – we’re just speeding up the number of strikes. Every second, the blade vibrates about 20,000 times which improves cutting quality.

“Our tests also show that with oscillations, a blade typically lasts twice as long when compared to traditional sectioning processes.”

The scientific procedure, known as histopathology, is widely used in the diagnosis of numerous conditions which attack human cells, such as cancer.

Once cut by the microtome, the tissue specimens, encased in wax, are stained to reveal the underlying tissue structures – this is essential to assess diseased tissues from biopsies – with the results forming an important part in the diagnoses of a wide range of conditions.

Extensive trials of the ultrasonic cutting tool have been carried out at CellPath, a specialist medical equipment manufacturer, and partner in the project.

Preliminary clinical trials have also been conducted at St Thomas’ Hospital, in central London, which is looking at the device’s impact on anatomical pathology.

“Our research will find out if this exciting innovative design concept can reduce costs and improve quality performance within the field of cellular pathology.”

Dr Roy is now looking at ways to manufacture and market the device.

Dr Roy and Dr Dong Wang, who worked extensively on the project, have submitted the paper, Ultrasonically assisted cutting of bio-tissues in microtomy, to the journal Physics Procedia.
The project was funded by Innovate UK.