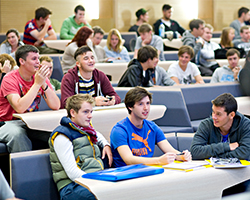 Loughborough University has topped a mock exercise run by the Times Higher Education (THE) magazine that anticipates how the UK’s 120 universities might perform in the new Teaching Excellence Framework (TEF).

According to the THE, Loughborough is one of the ‘new elite’ – campus-based, research-active institutions, which offer outstanding education and the best all-round student experience.

The TEF was one of a number of initiatives outlined in the Government’s recently published White Paper, which sets out a range of reforms to the higher education and research system. The TEF will assess higher education providers on their educational standards, to give students better information about where teaching quality is outstanding.

The THE’s analysis is based on the three metrics that will be at the heart of the TEF: retention, student satisfaction and graduate employment. However, the analysis is unable to take into account qualitative evidence, which in the TEF will be submitted by institutions alongside the core metrics in order to reach a decision on an institution’s rating.

Professor Robert Allison, Loughborough’s Vice-Chancellor, is delighted by the results of the THE’s mock assessment, which he says will challenge perceptions of what constitutes university excellence.

In an interview with the THE, he said: “I’m in no doubt that in the TEF there will be some of the Russell Group right at the top and I won’t be surprised if there are some quite a long way down.

“Will the Russell Group implode as a consequence? I doubt it. But will that challenge the message that the Russell Group gives out that ‘we are the country’s elite universities’? I hope it does, because if there is evidence to suggest constructs like that are true, I’m pleased it reinforces it. But if there is evidence that indicates constructs like that aren’t necessarily everything they are made out to be, that would be an interesting consequence.”

Details of the methodology for the mock assessment is available on the THE website.