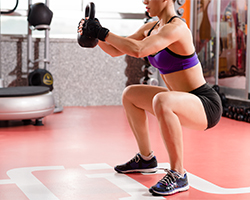 Strength training is widely regarded to be an effective way of boosting the physical performance and health of all individuals, from high performing athletes through to older people and those undergoing rehabilitation following injury or who are suffering from conditions such as osteoarthritis.

The results showed that explosive contractions are an easier and less tiring way of increasing strength and functional capacity of the muscles, and therefore a highly efficient method of training. The method increases strength by assisting the nervous system in ‘switching on’ and activating the trained muscles. In comparison, the more traditional sustained contractions – which demand a lot of effort and soon become tiring – are actually a more effective way of increasing muscle mass. Increasing muscle mass may be the main training goal for some people, including athletes in some sports, for aesthetic reasons or metabolic health.

The study investigated the effect of the different contractions on the participants’ quadriceps muscles located on the front of the thigh[1]. One group did the explosive contractions, one group did the sustained contractions, and a third group acted as a control group. The participants trained with 40 contractions repeated three times a week for three months. The force produced by every contraction was prescribed and monitored to ensure it was either explosive or sustained. An extensive range of performance and physiological measurements were done before and after the training to assess the changes.

Dr Folland, from Loughborough University’s School of Sport, Exercise and Health Sciences, part of the National Centre for Sport and Exercise Medicine East Midlands, said: “The easiest way to make muscles stronger has been debated by fitness and sports professionals for many years, but this study shows that it doesn’t have to mean lots of pain for any gain.

“Whereas traditional strength training is made up of slow, grinding contractions using heavy weights which is quite hard work, this study shows that short, sharp contractions are relatively easy to perform and a very beneficial way of building up strength. These short, explosive contractions may also be beneficial to older individuals and patient groups such as those with osteoarthritis, who would benefit from getting stronger, but are reluctant to undergo tiring sustained contractions.”

The study entitled Training specific functional, neural and hypertrophic adaptations to explosive- vs. sustained-contraction strength training has been published in the Journal of Applied Physiology. It was supported by the Arthritis Research UK Centre for Sport, Exercise and Osteoarthritis.