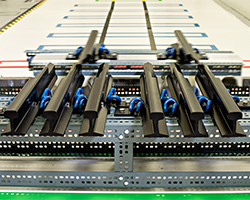 Loughborough University engineers have issued an invitation to engage the rail industry to help with the development of a prototype track switch.

Repoint is the result of research carried out with industry experts into improved switches which eradicate known issues with existing designs, by allowing redundant, fail-safe actuation and locking of track switches for the first time. This means that a failure of a single actuator element will not cause the failure of the entire switch – allowing trains to continue until such a time as maintenance becomes feasible.

The next stage of the two-and-a-half-year project, funded by RSSB, is for the development and deployment of a full scale, prototype track switch upon London Underground infrastructure. It will be progressed alongside RSSB, London Underground, and its supply base.

Licences to roll out Repoint’s patented technology will be made available both inside and outside of the UK, and the University will be engaging with the partners in the rail industry worldwide over the coming years.

Professor Dixon, Head of the Control Systems Research Group, said: “This invitation to tender is a golden opportunity to be involved with a project offering breakthrough technology that hasn’t been seen before. Once implemented, Repoint will improve reliability and increase capacity on our expanding rail network. We invite you to be a part of this journey.”

Companies interested in bidding for the contract, which has an approximate value of £400,000, should email C.Vallis@lboro.ac.uk.

More information on the invitation to tender is available on the Tenders Electronic Daily (TED) website – a supplement to the Official Journal of the EU.